Can grapefruits be dangerous with drugs? The answer is in our genes

Many foods commonly interact with drugs, which can significantly change the intended effect of the drug—and in some cases could even cause harm. Grapefruit is one of the most common foods that can modify a drug’s impact. You’ve probably heard the warnings not to drink grapefruit juice with cholesterol-lowering medication. However, grapefruit can interact with numerous other medications, both prescription and over-the-counter. Here’s why:

What appears relatively clear is that consumers are listening to side effect and contraindication messaging in direct-to-consumer (DTC) drug ads on TV and their physicians. The per-capita consumption of grapefruit has decreased rather steadily for the past three decades, while at the same time the intake of drug products which have contraindications with grapefruit have skyrocketed.

What does the grapefruit do?

Grapefruit has substances within it which inhibit the activity of an enzyme called CYP3A4. Because of the ubiquity of this enzyme in the body, grapefruit can interact with more than 90 prescription drugs. Because the enzyme involved in this interaction is so predictable, looking for other CYP3A4–interactive drugs can be used as an effective predictor of adverse effects with grapefruit. I use ‘adverse effects’ instead of ‘increasing effects’ because grapefruit (and some other citrus fruits such as oranges and limes) can increase or decrease drug effects. They moderate metabolic effects by blocking the activity of CPY3A4 to varying degrees (which often extends the drug half-life and can lead to toxicity effects), as well as altering transporter proteins in the body, which can lead to weakening of drug effects.

The FDA reports on this in their ‘For Consumers’ section, which is an awareness campaign intended to help the public. Below is an infographic of these two general pathways. 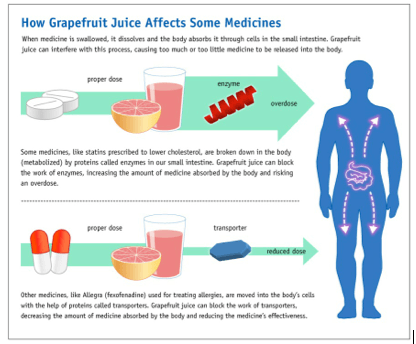 What Effect Have Prescription Drugs Had on Grapefruit Intake? 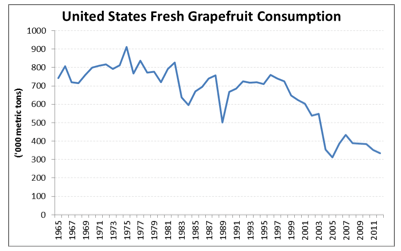 Just because grapefruit consumption began a decreasing trend in the 1990s doesn’t necessarily mean that it was related to drug prescriptions. However, preceding this and at around the same time, in 1991 the Lancet published an article (the first of its kind) about the interaction of citrus fruit (i.e., grapefruit) with the drugs felodipine and nifedipine. There were locally-decreasing trends around 1978 and the early 1980s as well, but those could just have easily been normal variation in the data. It should be emphasized here as well that the data which I plotted in Figure 2 above are not normalized against population size in the United States. What this means is that the data set, which begins in 1965, clearly was associated with a lower national population than is the case today. So as the consumption trend of grapefruit has decreased, there has also been a parallel increase in population. This actually means that the per capita consumption of grapefruit is a dramatically more steeply-declining trend than is displayed above. The bottom line, though, is that with ever more drugs available which are metabolized by CYP3A4 (and more consumer awareness), fewer grapefruit are being consumed. Whether that’s due to DTC advertising, physician-patient communication, increased communication from federal agencies, or another unexplored factor entirely, it’s moving in the right direction.

As with everything in our bodies, there is of course a genetic basis for this enzyme, and this article was designed to increase your Genetic Literacy.

“CYP3A4” is a complicated-looking bit of jargon which simply refers to CYtochrome P450 3A4. The enzyme is encoded by the CYP3A4 gene, which is part of a cluster of the P450 genes on one of your chromosomes (7q21.1). The CYP3A4 enzyme is simply a versatile oxidizing enzyme used to metabolize foreign organic molecules (such as drugs or environmental toxins). You are therefore simply modifying the activity of one of your body’s enzymes (produced by your genes) by consuming grapefruit.

Ben Locwin, PhD, MBA is a Contributor to the Genetic Literacy Project and is an author of a wide variety of scientific articles for books and magazines. He is also a researcher and consultant for a variety of industries including food and nutrition, pharmaceutical, behavioral and psychological, and academic.