Consumer Reports has been a sacred bible for me, providing evidence-based analysis of every day products that saves a lot of money without sacrificing quality. I’m 62 and I don’t believe I’ve ever bought a car without consulting CR first.

Which makes it all the more distressing that this once venerable institution-in-a-magazine has driven off the science cliff in obeisance to the current hysteria—yes, we are listening Neil deGrasse Tyson—over genetically modified foods.

The latest consumer report, “Milk Alternatives: Should You Sip or Skip,”  addresses alternatives to dairy milk, such as soy, coconut and almonds. 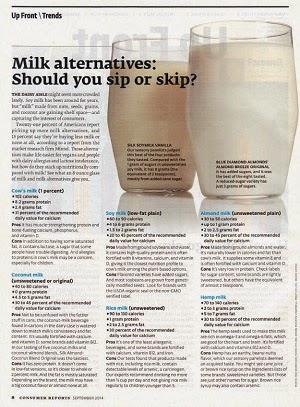 As Kevin Folta, head of the University of Florida plant technology program writes, the editors found fault in almost all of the milk alternatives, for instance pointing out that some contain “heavy metals.”

That’s a new obsession on the fringe green left, particularly on huckster natural product sites like Mike Adams’ NaturalNews and Joseph Mercola’s eponymous site, that try to scare people into buying ‘natural’ alternatives that are often untested, useless or worse.

Every major science agency around the world has determined that the kind of levels CR is noting are biologically meaningless, but that hasn’t stopped it from issuing scare-o-grams. It’s a missed opportunity to educate consumers about the difference between unwarranted fears and genuine dangers, but that’s the direction CR has been heading in in recent years.

But the most egregious CR scandal is its bonehead dissing of GMO soy milk. Upwards of 94% of the US soy crop is GMO so it’s no surprise that your favorite edamame or your morning glass of soy is made from soy beans designed to be grown with fewer insecticides (Bt soy) and less toxic herbicides. (herbicide resistant soy). In its “Cons” section, CR encourages consumers to “Look for brands with the USDA organic seal or the non-GMO verified label.” 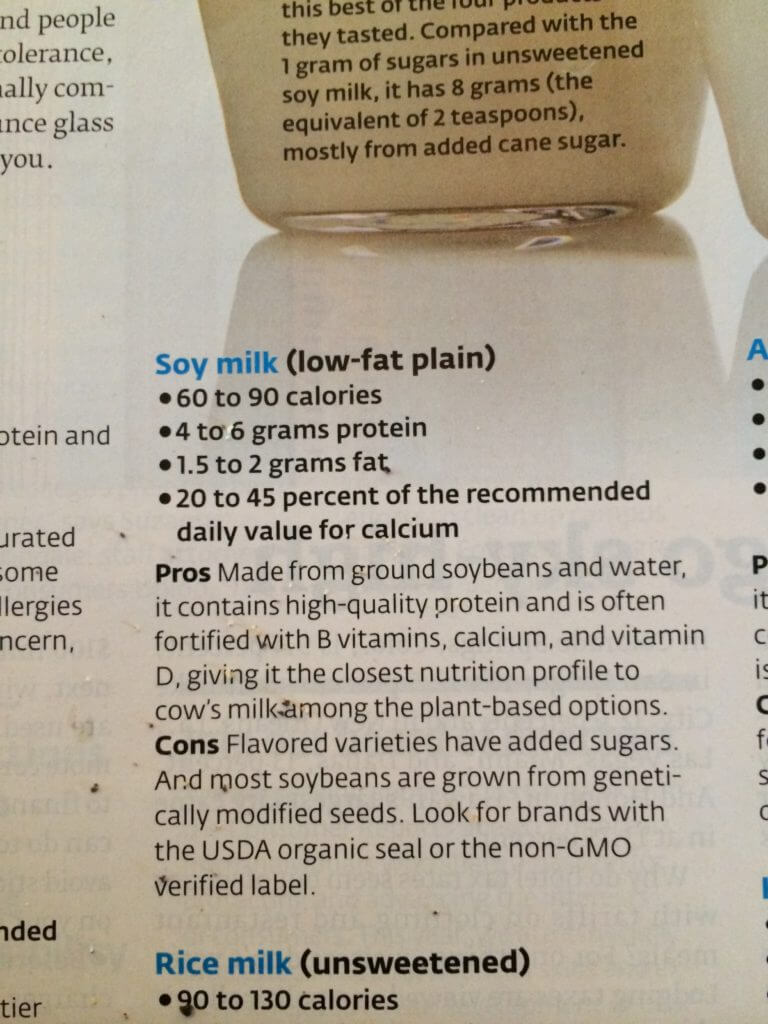 But why? It never explains, and based on CR’s stated intention to rely on evidence to form its judgments, it’s violating its own guidance. After all, there is not one published study that suggests that GM soy products are any less nutritious than alternatives; nor are they, or any approved GMO food, harmful in any way. In fact, it’s well established that organic products, including soy milk, are more likely to have a higher risk of pathogen contamination. The fact that anti-GMO activists have scared people into seeking alternatives to GMO products should not be enough to classify GMO soy in a negative light–if Consumer Reports stood behind science rather than endorsing the latest misguided trend.

This is not the first time that activists have brandished their anti-science club to squash empirical based thinking on the issue of soy milk. In 2009, Dean Foods, owner of the Silk Soymilk brand, faced a barrage of criticism from food activists when it switched from organic to conventional soybeans, calling it their “natural” line—which was correct. The move was actually done for the best of reasons. Most certified organic soybeans are sourced from countries with low or non-existent labor standards; the switch to conventional soy means that workers would not be exploited to satisfy Silk Soymilk customers.

The radical Organic Consumers Association went on a rampage, calling for a boycott—and it was effective. Rather than stand by its ideals and its fair labor commitment, Dean caved, throwing its worker protection pledge under the bus to embrace the anti-GMO scare campaign. It now positions itself as a driver of the fear bus. “GMOs? No thanks,” it writes on its silk.com web page. “We think the less you mess with Mother Nature, the better.” Hmm, soy milk is a processed food; you have to do considerable “messing” to get from the soy bean to the grocery store. Here’s a primer on how it’s processed.

Consumer Reports, of course, ignores all of this. As Folta notes, CR also offers a backdoor endorsement of organic and non-GMO verified brands—again, without any evidence to back it up.

The only difference between soy milk made with GM soy and alternatives is that the substitutes would almost certainly cost a heckuva a lot more because of the price premium extracted by organic producers. In other words consumers would be paying more for no benefits other than a psychic boost based on misinformation about the alleged dangers of GMO soy.

Is that the kind of advice that you want from Consumers Reports? How to spend more for no real benefits?

Who is steering this anti-science trend on CR? The key driver is almost certainly Michael Hansen, a senior staff scientist long known as a rogue outlier on the GM issue. Hansen is notorious for hyping the alleged potential dangers of GMOs in contrast with every major independent global science oversight committee in the world. Geneticist Val Giddings has provided a comprehensive analysis of Hansen’s disinformation strategy at state legislatures where he is often asked to speak because of his connection to CR.

Hansen’s director, Jean Halloran, is little better. She long ago embraced the style views of the activist Organic Consumers Association, referring to GM crops as “Frankenfoods,” and claiming that the US food regulatory oversight of GMO safety is a “fraud.

If you’re angry at this kowtowing by CR to the ant-science crowd, you can express your opinion directly by clicking through here and telling the editors of your concerns.