Single dose of anti-depressant alters brain? Maybe, but what does that mean?

A small research study just published in the journal Current Biology looked at functional Magnetic Resonance Imaging (fMRI) scans of healthy participants’ brains and concluded that as little as a single dose of escitalopram (Lexapro)–one of the class of antidepressant known as a selective serotonin reuptake inhibitor (SSRI)–‘dramatically alters functional connectivity throughout the whole brain in brain activity – characterized by decreased in activity across many brain regions and increased in the cerebellum and thalamus.” 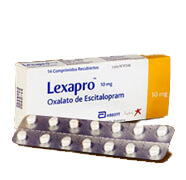 The drug reduced “connectivity” among clusters of brain cells in most regions of the brain except for regions — the cerebellum and thalamus — where the drug boosted connectivity. The hope is to uncover distinct differences in brain connectivity between depression patients who ultimately respond to an antidepressant and those who don’t.

As I’ve written about previously, there’s a major difference between measuring something and substantiating that a measured difference is meaningful. In much of our neuroscience literature there is a terrible trend toward imputing agency in effects found in fMRI and other neuroimaging equipment. Sure, images can be subjectively (and in some cases objectively) compared to note differences, but we really have no idea what ‘differences’ in activity mean because we use proxies for these images, such as changes in brain glucose metabolism.

Do these changes mean that there is less thinking going on? More thinking? Decreased stress? Improved feelings of satisfaction? Even clinically-accepted instruments for measuring mood, outlook, and so forth are absolutely replete with inter-rater and inter-subject variation; they can be useful guides, but by themselves are not reliably diagnostic.

The reason why the study authors found this particular result interesting is that it has generally been thought for about three decades that SSRIs take a few to several weeks to have an effect. The study author, Julia Sacher, observed, “It is possible that these connectivity changes are the first step in remodeling the brain, as there is evidence from other experiments that such functional connectivity changes can reflect neuroplastic change.”

Not only have studies in recent years pointed toward the fact that single doses can affect the brain, but they also have also suggested that the positive effects of antidepressants are in some to large part due to neuroplastic changes and remodeling of neural structures. Of course, under the auspices of the ‘chemical imbalance hypothesis,’ which has largely been discredited in recent years as being too over-simplified of a model, the effects of antidepressants would come from moderating effects on neurotransmitter concentrations at synaptic connections.

The first antidepressants were discovered by accident. And interestingly, a psychiatrist named Roland Kuhn found that the first tricyclic drugs (specifically imipramine) showed a rapid effect: “As a rule, the initial response was evident within two to three days.”

So how robust is the conventional wisdom that antidepressants take weeks to achieve their effect? And was this early research (1958 in the case of Kuhn’s paper) indicative of a first look at rapid neuroplasticity or just hopeful researcher bias?

To what level is placebo a factor?

With any drug treatment, there is always a placebo effect. One of the difficulties in demonstrating efficacy with antidepressants is showing that the effect is statistically significantly greater than placebo. In his book The Emperor’s New Drugs, Irving Kirsch explored the magnitude of effect of placebo in antidepressants, writing (p. 28), “Our analyses showed that 82 percent of the response to medication had also been produced by a simple inert placebo. As conventionally interpreted, this means that less than 20 percent of the response to antidepressant medication is a drug effect.”

It’s indeed possible that even taking a placebo could show neuroplastic changes, as any type of learning functions at least in part through neuroplastic changes. After all, the misconception is that placebo is an effect occurring after ‘no treatment at all,’ when in fact it comes in the form of sugar pills, dummy capsules and sham surgeries – and so there actually is a treatment. It’s the effect represented by being treated, even if that treatment doesn’t contain the active drug product under study. Any placebo (that is ‘treatment’) effects observed appear very real to patients and study participants, including side effects observed in both the drug and placebo groups of a study. It’s likely then that this ‘treatment’ effect is also a largely neuroplastic one as well.