Over the past few weeks, the South Florida Science Center and Aquarium of West Palm Beach has been eagerly promoting a Thursday, November 13, 2014, talk titled Science on Tap-GMOs Exposed!

The featured speaker? Michelle Parenti Lewis. As Kevin Folta noted in a Friday post on his Illumination blog, she is a local dietician who has no background in genetics, but is notorious in the region for spreading unscientific fear-based claims about genetically modified food and crops. 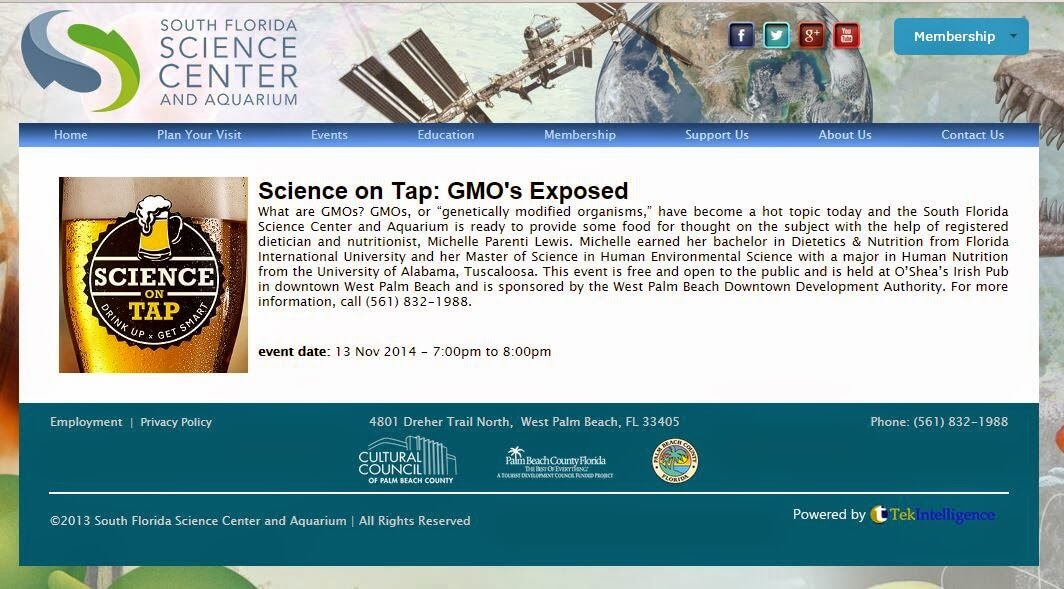 So what can a trained RD “expose”? A quick google search shows that the South Florida Science Center and Aquarium has been duped. They have scheduled what will likely not be a scientific talk, but an activist parasite posing as science. This is the most disgusting of all scams. And they fell for it. A little poking around shows that Ms. Lewis is an anti-GMO advocate. In a local promotion for the same event on SouthFlorida.com they show the event’s true colors:

The promotion claims that Lewis will describe “their potentially harmful effects”, which is code for “these have no documented health effects over 17 years, but that’s not scary so we’ll talk about potential effects”. This sure looks like an activist rant posing as a scientific presentation.

Cloned foods? I guess those organic bananas, strawberries, citrus, and dozens of other crops are off the table.

A little more digging and it’s clear that she’s in cahoots with Food and Water Watch, an activist hive that spends a lot of time trashing sound transgenic technology. She has spoken at several events in support of food labeling. Read this and weep, science lovers: 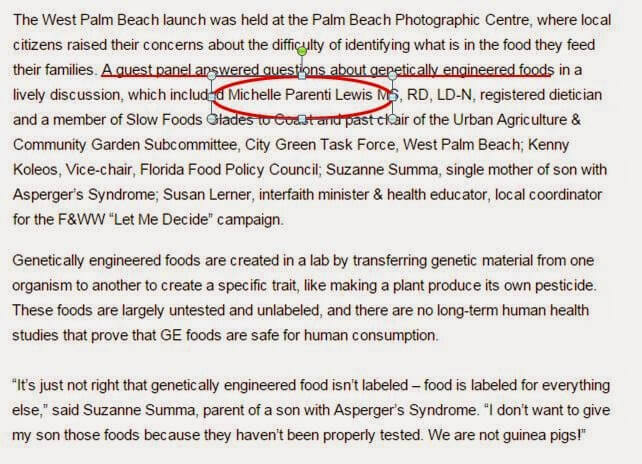 Cloned foods? I guess those organic bananas, strawberries, citrus, and dozens of other crops are off the table.

A little more digging and it’s clear that she’s in cahoots with Food and Water Watch, an activist hive that spends a lot of time trashing sound transgenic technology. She has spoken at several events in support of food labeling. Read this and weep, science lovers:

Wow, same old junk. So congratulations South Florida Science Center and Aquarium, you’ve been bamboozled by activists posing as scientists. You’ve been tricked by someone with a lot of letters after her name that chooses to ignore the scientific literature, and that should be frightening.

Folta’s expose had an impact. Within 24 hours, the organizer’s had changed the name of the event, neutering it to GMO’s on Tap: Science and You. “I I received word from their CEO that they’d be “pushing  back the start date of the event until we have secured an appropriate speaker who can represent the other side of the issue,” Folta wrote in an updated blog post.

“The other side? (head hits desk) They still don’t get it, but we’re moving in the right direction. Creationists everywhere got excited that the science center is now accepting talks for scientifically defunct ideas in an effort to hear all sides.”

I advised to simply uncouple the South Florida Science Center and Aquarium from the event.  That’s the best move. They’d never bring in a psychic, a UFO expert, or a moon-landing hoaxer, or a Holocaust Denier, and then bring in a real  expert to show “both sides”.  It falls directly into the creationist scheme of teach the controversy, when science clearly shows there’s no controversy to teach.

We’ll see what happens next.

It is hard to believe that a Science Center needs to be reminded about how science works. It is not about presenting opinions of anyone that has one. It is about hypothesis-driven data, good experiments, solid statistics and hard data. It is not what a dietitian thinks and how she’ll advance an activist agenda.

That’s the stuff for the Whole Foods Community Room. Go there and spew nonsense. However, the endorsement of a Science Center must only be used to endorse science backed by the scholarly literature and the scientific consensus.