It’s Girl Scout cookie selling fund-raising season, which means the annual campaign to vilify young girls for selling cookies made with ingredients from genetic modified foods is in full swing. But as in recent years, the Girl Scouts are holding firm in their support of science.

The Girl Scouts have faced relentless criticism from anti-GMO activists for years because of its unwillingness to embrace activist criticism that its cookies are in any way different from cookies without GM ingredients. The campaign turned into a cause célèbre two years ago when an Orange County, Country California mother used her then 6-year old Girl Scout daughter as a propaganda prop, setting up a Facebook page that urged fellow scout parents to boycott the annual sales event to force the organization to go GMO free. Tens of thousands of people signed her Change.org petition. 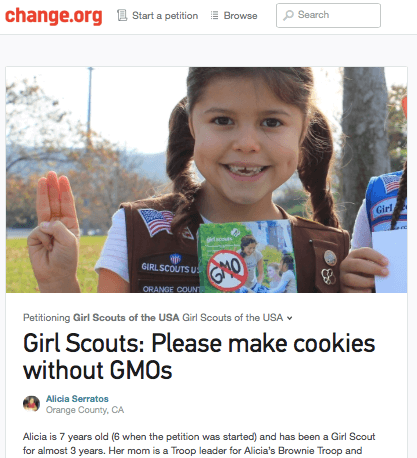 Helped by heavy promotion by fringe anti-science activist sites like GMOInside and NaturalNews.com, the campaign went viral. The mother and activist articles claim that sugar derived from GM sugar beets used in making the cookies are “health-destroying.” In fact, sugar made from GM and non GM sources is identical. Nearly all of the sugar beets planted in the U.S. are now engineered to resist the glyphosate herbicide–dramatically cutting down in the use of more toxic pesticides. Proteins containing traces of the trait are removed in processing. From a genetic and health perspective, all sugar–from conventional, organic and GM sources–are 100% the same.

Many moms have embraced the campaign, often spreading the worst kind of misinformation about crop biotechnology. “I believe that to participate in this year’s Girl Scout Cookie sale would be a 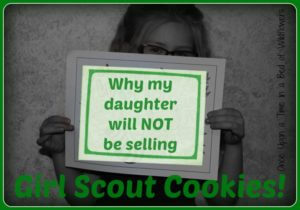 fundamental violation of the Girl Scout Promise, and the Girl Scout Law,” wrote one upstate New York mother last year in a rambling post that linked to the website of Jeffrey Smith, a cult-following former “flying yogic instructor” with no science background who has become a guru to many in the anti-GMO movement but is seen as a quack by mainstream scientists.

Despite such pressure, the Girl Scouts have doggedly stood firmly with the scientific consensus on the safety of GMOs and remained steadfast in its pro-science position. With such a large segment of consumers concerned about GMOs, it’s no surprise that people wonder if their precious annual Thin Mints or Samoas contain genetically modified ingredients. Laudably, GSA walks the walk, and talks the pro-science talk on its extensive FAQ section.

Related article:  Being Gilles-Eric Seralini: Inside the mind of the anti-GM movement 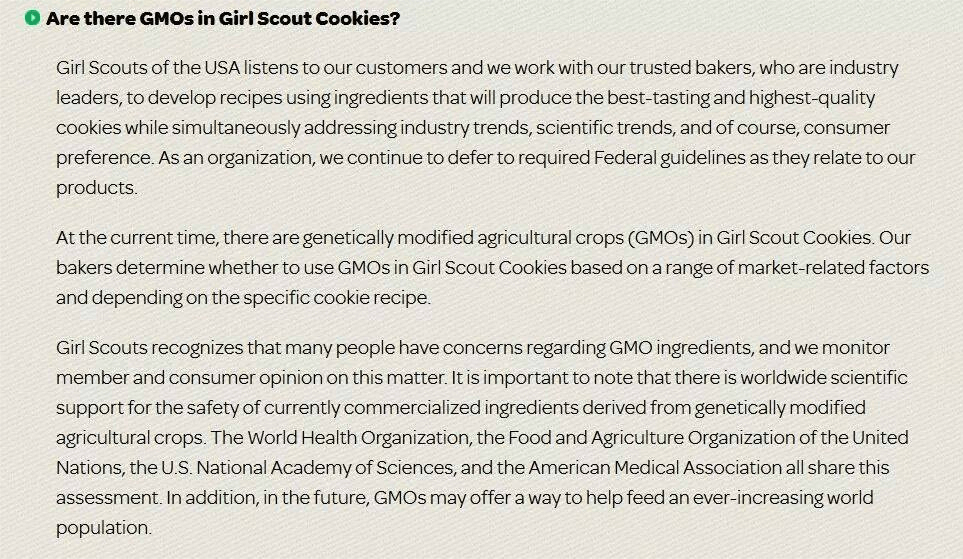 Kudos to the Girl Scouts for disseminating accurate, science-based information about GMOs and not bowing to undue pressure. Indeed, even with unscientific and arbitrarily emotional parents forbidding their daughters to sell Girl Scout cookies due to baseless anti-GMO rage, the message hasn’t changed. In a day and age of American school districts promoting misinformation about GMOs and removing genetically modified ingredients from school lunches, the Girl Scouts’ stance is refreshing.

This is one more feather in the Girl Scouts’ cap. The organization has shown its science savvy in 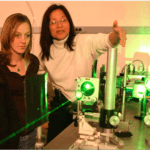 more ways than one. It supports STEM education for girls in its annual legislative agenda. Each rank of Girl Scouts explores various areas of science, and the organization offers merit badges in ‘Science and Technology’ as well as in ‘Innovation.’ In addition, the the Girl Scouts published an original research report exploring girls’ relationship to STEM fields.

The organization is wise to recognize and validate its customers’ concerns. As University of Florida plant geneticist Kevin Folta states, “soft is persuasive” for those on the fence about the safety and benefits of GM foods. Without being harsh or seeming uncaring, the FAQ answer not only affirms the widely-accepted scientific knowledge that genetically modified ingredients are safe, but goes further to assert the Girl Scouts’ opinion that these technologies have the potential to nourish the world’s growing population.

The consequences would have been grim if the Girl Scouts had succumbed to activist pressure and switched to GMO-free cookies. Campaigners questioning GMO safety would have had fodder for their fears, using the rejection of GM ingredients to reinforce unscientific propaganda. It’s up to the parents and role models of impressionable children to promote science-based information–and not exploit innocent children as propaganda props. For one of America’s most beloved treats to contain GMOs is benign and economically sound. For one of America’s most beloved organizations to take a science-based stance on GMOs is inspiring.

Kavin Senapathy is a mother of two and a freelance writer who works for a genomics and bioinformatics R&D in Madison, WI. Opinions expressed are her own and do not reflect her employer. Follow Kavin on her science advocacy Facebook page, and Twitter @ksenapathy