Forget GMOs: Surgeon General has determined that DNA is dangerous to your health!

If an overwhelming majority of Americans, particularly self-described liberals, had their way, all foods would soon be carrying this label:

LOL! That’s the mock label ginned up by George Mason University law professor Ilya Somin in an article for the Washington Post.

The monthly Oklahoma State survey released two weeks ago by economist Jayson Lusk at the Department of Agricultural Economics found, unsurprisingly, that Americans remain skeptical of GMOs: 82 percent said they back mandatory labeling of foods made with ingredients grown from genetically engineered seeds. But that’s less than the 85.6 percent of respondents who support mandatory country of origin labels for meat—which is not on the activist agenda. 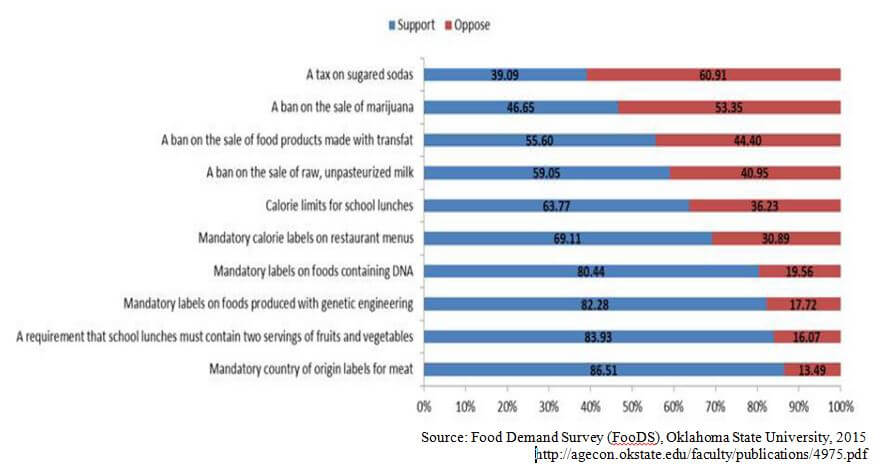 The real laugher: Statistically indistinguishable from the percentage of people who want GMO labelling, an astonishing 80.44 percent of Americans support mandatory labeling of foods containing DNA! Calling on Gary Hirshberg at Just Label It! You need to expand your campaign!

Robbie Gonzalez over at io9 explains the difference between DNA and GMO:

The results indicate that most Americans do not understand the difference between DNA and a genetically modified food. The former is genetic material essential to life as we know it. The latter is an edible organism, the genetic material of which has been altered for some purpose. One is a building block, the other is the result of a process that alters those building blocks to some end. Given that a label warning of a food’s DNA content would be, for all intents and purposes, as meaningless as a label warning of, say, its water content, the survey results reflect an unsettling degree of scientific ignorance in the American population.

This distressing result comes despite the fact that every major science organization in the world has endorsed the comparative safety of GMOs and major liberal publications in the United States—from the New York Times to the Washington Post to Scientific American–has joined the American Medical Association in opposing labelling?

In fact, although a majority of people in all ideological categories express support for GMO labeling, the percentage is off the charts for the liberal community which views this issue as a litmus test of ideological purity and solidarity. Polls show that most of those GMO skeptics and outright opponents consider themselves liberal—and celebrate themselves for their scientific acumen because a majority also endorse evolution over Creationism and embrace the fact of human-induced climate change.

As the Post’s Somin writes, the survey results probably represent “an example of the intersection between scientific ignorance and political ignorance, both of which are widespread.”

Unfortunately, this is a case where individually rational behavior leads to potentially dangerous collective outcomes. While it doesn’t much matter whether any individual voter is ignorant about science or public policy, when a majority (or even a large minority) of the electorate is ignorant in these ways, it can lead to the adoption of dangerous and counterproductive government policies. In this case, excessive and unnecessary warning labels on food products could confuse consumers, and divert their limited attention from real dangers.

Jayson Lusk identified at least one clue as to why the disconnect between science and food. When asked which books respondents depended upon for their information, almost all replied “none”, meaning they looked to their friends or the web. Uh, oh. In the few cases in which they did cite a book, the most popular ones were Michael Pollan’s Omnivore’s Dilemma and Eric Schlosser’s Fast Food Nation–two books adopted as literal food bibles amongst the left but harsh criticized by mainstream scientists ideological screeds.

There is some good news in all this. Despite widespread ignorance about the relative safety of GM foods, recent votes rejecting mandatory GMO labeling initiatives in California, Colorado and Washington indicate that views on this issue are “soft” and a sizable fraction of people will embrace science when  an issue is publicly dissected.

“Clearly, many people’s views about mandatory GMO labeling are not fixed constructs, but are (at least at this point) somewhat malleable and are open to education and persuasion,” writes Lusk in a follow up post. “As such, I do not believe polls of this sort provide “the” answer on whether a policy should pass/fail, but rather provide initial insights for where the conversation will begin.”

Putting the public “demand” for mandatory GMO labeling in perspective, University of California Berkeley biologist Michael Eisen has noted how little information would be conveyed by “GMO Inside”—or “DNA Inside”—labels:

If you’re worried that the GMOs you’re eating might kill you, then you should want to know what specific modification your food contains.

… if you are concerned that the transgenic production of plants resistant to certain herbicides encourages the excessive use of herbicides and triggers an herbicide treadmill, then you can boycott crops containing these modifications. But it doesn’t make sense to oppose the use of crops engineered to resist diseases, or to produce essential vitamins. Indeed, there are many, like UC Davis’s Pam Ronald, who believe that advanced development of GMOs is the best way to advance organic and sustainable agriculture. You may disagree with her, but it should be clear that the effect on agricultural practices varies depending on the specific plant and type of modification being considered.

Thus the very reasons supporters of GMO labeling cite for labeling GMOs demand more information than “This product contains genetically modified ingredients”. And it’s the central irony of [mandaotry labeling propostions] that in backing the bil[s]l they are, in tangible ways, working to ensure they do not get information that will be actually useful to them.

Jon Entine, executive director of the Genetic Literacy Project, is a Senior Fellow at the World Food Center Institute for Food and Agricultural Literacy, University of California-Davis. Follow @JonEntine on Twitter