Throughout human history, as the world’s population has grown, so, too, has the amount of arable land converted into farmland.

But we’re reaching an inflection point in agriculture that complicates that simple principle of expansion. The world has nearly exhausted its land reserves available for farming. 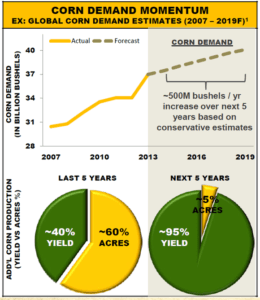 That means humans will need to find a way to increase the amount of food produced from land already dedicated to agriculture. To do that, farmers will need to rely on yield-boosting technology more than ever.

Global demand for corn increased 24 percent from 2007 to 2013. Farmers met demand by boosting production through a combination of improving yields (technology) and adding more farmland (simple expansion). As the chart illustrates, roughly 40 percent of increased corn production during the period came from improving yields, while the remaining 60 percent  bump was derived from land expansion.

Yet, the additional production for each crop will be overwhelmingly dependent on improving yields (technology) instead of the historical low-hanging fruit presented by land expansion. That presents a daunting challenge, but Monsanto is ready to answer the call.