Where’s the beef (and fat)? Are you ready for a juicy ‘test tube’ burger?

It’s the coolest thing–especially if you enjoy the taste of beef, or try to eat it sometimes as a good source of protein, iron, vitamin B-12, and other nutrients, yet hate the fact that animals are bred and killed for it, with massive environmental impact to boot. I’m talking about cultured, or in vitro, meat.

Created in a two-year, $325,000 project financed by Sergey Brin (one of Google’s founders), in vitro burgers were taste tested a year and a half ago in London to mixed reactions. Some tasters liked the burgers, some liked the taste but not the idea of its unnatural origin and many said they liked it, but only because of the environmental benefits they offer.

At $30 per pound, in vitro beef is not economically viable at present, but it’s expected to be viable within ten years. Between now and then, if it’s really going to be popular, developers will need to work out a few kinks that affect the taste and texture. Otherwise, the “where’s the beef” catchphrase–introduced by the Wendy’s fast-food chain, but popularized in former Vice President Walter Mondale’s 1984 presidential campaign challenge of President Ronald Reagan–could be excavated and used by in vitro meat critiques.

But, if developers do succeed making cultured beef taste and feel exactly like eating natural beef, the idea would most certainly sell. For now, given that the state-of-the art in vitro burger is still in the laboratory stage, we shouldn’t be worried about surveys showing that people would be motivated only by in vitro beef’s societal benefits. Eventually, they’ll seek it out, not only to do good, but also because they like it.

How is cultured beef made and what are the benefits? 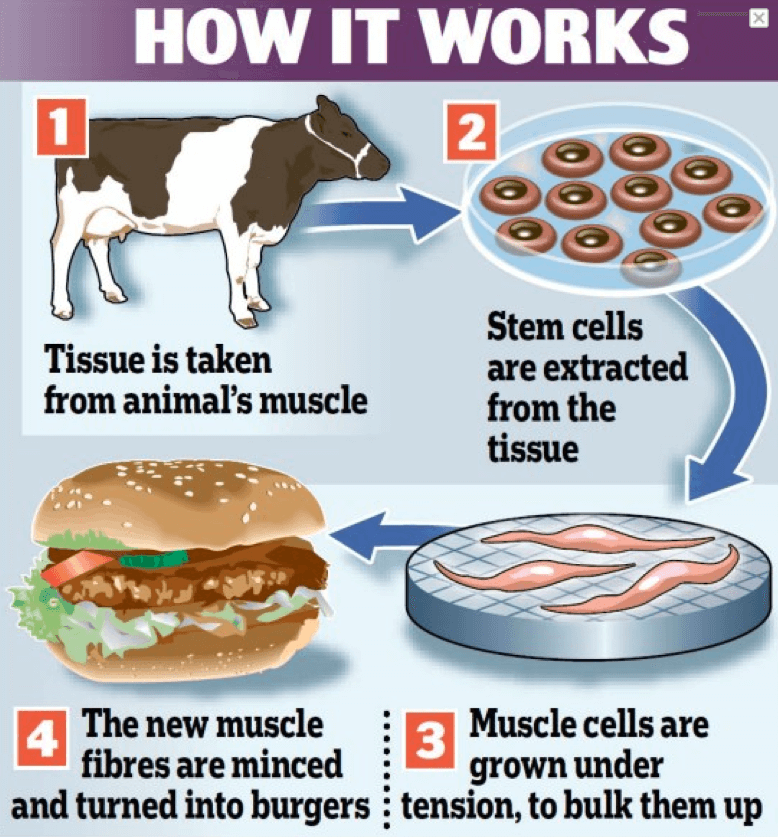 cells inside a muscle (in vivo), but if harvested they also can mature in laboratory cell culture (in vitro). Additionally, while reproduction of muscle stem cells in vitro to produce large quantities as a supply from which muscle cells can be produced continuously has been challenging, new methods have made this goal more achievable.

Thus, eventually, it should be possible to mass produce animal muscle cells using a fairly small number of animals as a stem cell source. This would be a major environmental advantage, since large cattle populations require enormous amounts of land, and release high quantities of methane, an even more potent greenhouse gas than carbon dioxide. At the same time, stem cell harvesting from muscles can be performed on living animals, with no need to cut short an animal’s natural lifespan.

But a natural muscle contains more than just muscle tissue. Within and surrounding the muscle is connective tissue. Connective tissue includes fat tissue, which has a big impact on how meat tastes. Fat cells come from stem cells different from the stem cells that give rise to muscle cells. The fat in beef has negative health consequences, because it includes a lot of saturated fat. But culturing muscle stem cells produces only mature muscle cells, which are almost completely protein.

In vitro beef is 100 percent lean, but with no connective tissue to hold it together it comes out of the lab as narrow strips of muscle fiber–so narrow that 20,000 strips are needed for a 140 gram (5 ounce) burger. Because these strips of muscle have no fat at all, the chef who prepared the burgers tested in London did so by frying the cultured meat strips in huge amounts of butter, along with breadcrumbs and salt, plus colorings to make the meat look and taste more like natural beef. That is not an exact simulation.

To make in vitro beef more like natural beef, fat cells have to be cultured along with muscle cells. The tissues developing as a result of the culturing have to come out as a palatable mix of protein and fat. Also, by working in types of connective tissue other than fat, researchers could synthesize steaks as well as burger meat.

It may sound like a very tall order, and it is, but the benefits can be substantial. For, in addition to the environmental and ethical draw, designing the fat content, along with the protein, would be a major health advantage. Instead of the usual fat that’s in beef (containing a large fraction of saturated fatty acids), the test tube version could be synthesized with a mixture of fats, containing fatty acids of our choosing. For instance, it could be designed with a high proportion of monounsaturated fatty acids and omega-3 polyunsaturated fatty acids –in other words, like salmon. Therefore, it would be as healthy as salmon, but with the taste and feel of beef. That’s the potential here.

“Test tube” beef offers the possibility of ending the breeding of livestock for slaughter–and the ability to produce in vitro meat on future space colonies, where farming livestock will be unthinkable. All of that should make test tube beef irresistible to anyone in a position to drive the technology forward. Get the taste right and it has every chance of being a huge hit.