It may seem hard to believe in many areas of the United States that have been in the icy grip of winter all month, but for the alfalfa farmers of the west, export season is just a few weeks away. Headlines last year touted a disaster for U.S. alfalfa exports because China’s veritable embargo due to traces of Roundup Ready alfalfa DNA found in shipments. An article in The Western Producer proclaimed the situation “catastrophic” but the most vocal, and near hysterical, reaction came from anti-GMO websites.

“China Blocks US Imports Over GMO Contamination,” chortled the Natural Society in its blog headline, adding, “Once again rejecting US GMOs,” as if GM crops were now the pariah of the world. This meme was repeated on dozens of anti-biotech websites, which barely contained their glee that one of their dire predictions actually seemed to come true: GMO contamination is a ticking time bomb for American agriculture.

Is the U.S. alfalfa export market doomed? Will alfalfa farmers turn away from genetically engineered alfalfa in response?

Farmers in the U.S. have adopted genetically engineered crops for many reasons, from enabling no-till agriculture to lowering labor and other input costs as well as environmental concerns but the primary goal for a farmer, as in any business, is making a profit. Since the introduction of Roundup Ready crops in 1996, more and more GE crops have been put into cultivation while the 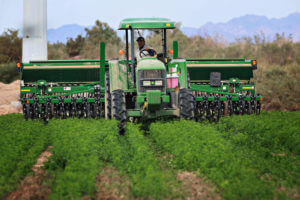 Then in September of 2013, a Washington state farmer’s conventional alfalfa crop was rejected by export buyers when it was found to contain Roundup Ready DNA. To GE critics, this was the inevitable consequence of allowing RR alfalfa to be grown alongside conventional alfalfa. Unlike corn, soybean and other GMO crops, alfalfa is a perennial that is bee pollinated. It was assumed that gene drift, the transfer of pollen to conventional plants resulting in seed with GE traits, would be much more likely than in alfalfa than annual crops.  In 2011, Anastasia Bodnar explained in detail why alfalfa is different than annual crops and how conventional and genetically engineered alfalfa can coexist at Biology Fortified. James McWilliams even covered it in The Atlantic. So how did this happen?

After an investigation, it is likely that this farmer simply got a bag of mislabeled seed, but fear of further rejection prompted calls for more stringent regulations. Traditionally, farmers have used strip tests to check for GE DNA with a threshold of 2-5 percent, but now there are extremely sensitive tests that allow detection at levels of 0.1 percent. This amount can be caused simply by pollen from a GE crop blowing on to conventional hay or genetic material from processing conventional and GE hay in the same machines, even if the crop is 100 percent conventional alfalfa. The USDA chose not to interfere, calling it a commercial issue not warranting government intervention.

So when last summer China began testing alfalfa shipment with the more senstive test, many were rejected due to the presence of extremely small amounts of unapproved strains in shipments. Containers of alfalfa sat in port rotting before they could be resold. In December, published remarks by President Xi Jinping were taken as a ban of hay imports from the U.S. as China also began rejecting corn shipments they claimed contained unapproved GE strains, even as they approved a new corn variety from Monsanto this January. Websites such as The Inquisitr and the Biosafety Information Center heralded this as the problem GE critics had been warning about, but reading President Xi’s statement suggests otherwise.

When we talk about the quality and safety of agricultural products, there’s one question that must be mentioned, which is the GMO question,” the president said. “GMO is a new technology, but also a new industry, and has broad prospects for development. As a new item, society has debates and doubts on GMO techniques, which is normal. On this issue, I have to emphasize two points: First is to ensure safety, second is to innovate by ourselves. Which is to say, we must be bold in studying it, [but] be cautious in promoting it. Industrial production of GMOs and commercialization must be strictly in accordance with the nation’s specified rules and techniques, moving steadily, ensuring no mishaps, taking into account safety factors. [We] must boldly research and innovate, dominate the high points of GMO techniques, and [we] cannot let foreign companies dominate the GMO market.

In fact, China leads the world in money spent on GMO research but has released very little in the way of data. In 2013, several Chinese citizens were arrested for espionage for attempting to smuggle proprietary GMO seed out of the U.S. China is now a net importer of food, they must increase their domestic food production to meet demand and they see GE crops as an important part of this increase.  There is little doubt that the Chinese issue with genetic “contamination” is simply a political tool more to do with protecting their own GE industry than safety.  Long approval processes for GE products from the U.S. combined with rejections of shipments with nominal amounts of DNA could be designed to move U.S. farmers back to conventional seed products, damaging the biotech industry and paving the way for China to jump ahead.

Opinion polls show the Chinese public with an even more negative attitude toward GE crops than in the U.S. and their record on food safety is not likely to make the public more receptive. This is helpful now as the government is seeking to limit imports, but is problematic for a future in China that will likely require genetically engineered crops to feed its population.

In the meantime, alfalfa exports have plummeted and the question remains as to whether farmers will find new buyers for their alfalfa or turn back to conventional seed in hopes of retaining China’s business. Alfalfa farmer Kevin Hoyer put the issue into perspective:

I can only speak for myself, but RR alfalfa is not an issue in the upper Midwest. We really don’t need it due to our environment. Now on the west coast, that is a totally different climate, they have year round production where weed control is a challenge. As far as China goes, that is purely a political issue. As traits become approved this will be a [moot] point. So, long story short, I don’t think the China issue will be a driving factor in the RR alfalfa decision process.

Amber Sherwood-K is a graduate student in the SUNY Buffalo Science and the Public program. She writes on issues surrounding genetically modified organisms, nutrition and agriculture. Follow her on Twitter @AmberSherwoodK.