Seeds and home gardens conjure hopeful images of song-filled spring, especially welcomed after a brutal winter over much of North America. Gardeners are taking to the soil. Some enjoy harvesting home-grown produce, while others crave a connection with nature. So it’s no surprise that seed companies are hyping their deep connections to birds and bees to burnish their brands.

It’s great imagery but all is not so warm and buzzy in the real world. The Genetic Literacy Project has found that at least two of the largest popular seed companies–Burpee and Buzzy–are misleadingly marketing their products to exploit  hysteria over GMOs and conventional agriculture.

Millions of Americans trust seed companies not only to populate their gardens with fruits, veggies, and flowers, but for reliable information. Burpee Seeds company website states, “Through good times and bad, great depression and world wars, Burpee has been a beacon of hope for Americans for over a century.” Its website is full of trusted “expert advice.”

Another family favorite, Buzzy Seeds, are quickly becoming a household name, with products featured nationwide at stores like Target. A leader in easy-to-grow plant kits for kids, parents turn to Buzzy with its cute smiling bee logo to sow a new generation’s love for gardening. One would imagine that these beacons of hope and stewards of nature would impart truth and wisdom to American consumers. Instead, they feed unsubstantiated fear about pollinator health and genetic engineering.

Burpee Seeds is now circulating a press release, “Obama stung by bees,” announcing a partnership with the U.S. Department of Agriculture and the Department of the Interior to convince a million gardeners to plant bee and butterfly friendly seeds. That’s a good thing, although its clear goal is to promote Burpee seeds. What’s not so good is how Burpee frames its promotion.

Yesterday the Environmental Protection Agency released the news it will not approve new applications of neonicotinoids for outdoor use based on concerns for declining bee populations. The disturbing problem of pollinator population decline in bees, bats, butterflies and birds now poses a national security threat.

While it seems scary, painting the issue as a “national security threat” is hyperbolic and deceptive. Last month, Science 2.0 reported the EPA’s recent findings:  Neonicotinoids are not responsible for “Colony Collapse Disorder.” A relatively new class of insecticides thought to be less harmful to beneficial pollinators than previously-used chemicals, “neonics” and the companies that manufacture them are often blamed for declining bee populations. But are pollinator populations actually declining?

Colony Collapse Disorder, or CCD, is a recurring cyclical phenomenon that began well before the advent of modern agriculture. The natural rise and fall of bee populations since the introduction of neonics in the mid-nineties fuels ongoing panic from mainstream media to small social media corners, yet data show that the number of managed beehives has risen since that time.

The organic lobbying group Organic Consumers Association claims that ag biotech practices kill bees, butterflies, and birds, specifically blaming neonics. The tacit message coming from these and other pro-organic groups is that organic farming is the solution to nasty problems perpetuated by conventional farming. The issues surrounding neonics is complex–that’s true about any pesticide–but on balance, in most cases the chemical allows farmers to control insects with the application of less harmful chemicals. In other words, if we were talking reason rather than ideology, we should not be demonizing this pesticide.

Buzzy Seeds also exploits anti-GE sentiment, positioning itself on the so-called David side against Big Ag Goliath. My friend’s children recently received this strawberry grow kit from their grandmother. 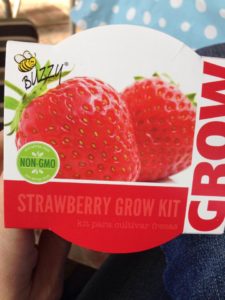 At first glance I saw only one minor issue– the “Non-GMO” label. That’s strange; there are no GMO strawberries, so why this label? It’s apparently good marketing, at least from a cynic’s perspective. The Buzzy website proudly states, “Buzzy is committed to providing you with the best quality products available. Our seeds are 100% natural and non-GMO.” By juxtaposing “best quality” with “non-GMO”, Buzzy implies that there is something inherently wrong with GE products. Just a bit seamy, yes? As in a growing number of cases, the “Non-GMO” badge has evolved into a for-profit marketing ploy grounded in creating fear.

Buzzy appears to have a lock on sleazy marketing ploys. Take a look at the label listing the contents on its grow kit. 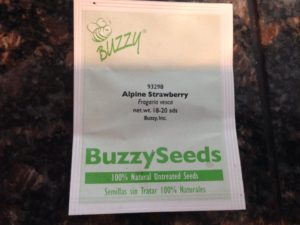 It claims the seeds are “Alpine Strawberry”. But that’s impossible. Alpine strawberries, formally known as Fragaria vesca, are a wild diploid strawberry variety. Ploidy refers to the number of sets of chromosomes in the genome of a given organism. For example, humans are diploid, meaning we have two sets of twenty-three chromosomes from each parent, for a total of forty-six.

Humans have manipulated ploidy in fruits for various reasons, including to create larger varieties. The strawberries pictured on the package of the Buzzy kit are in fact not diploid Fragaria vesca, but hybrid octoploid Fragaria × ananassa. I suspected as much, but confirmed with Kevin Folta and Karl Haro von Mogel, both public genomics scientists. The seeds contained in the packaging are for fruits that are much smaller than the modern hybrids pictured on the package:

So here is Buzzy, exploiting fears around GE crops by playing up their “natural” strawberry seeds while selling strawberry seeds that have been heavily modified in wholly “unnatural” ways. “Natural” strawberries are not fat and juicy; humans have intervened to make them into juicy, octoploid, hybrids. Indeed, the “Non-GMO” label on this and other products is arbitrary. Nearly all the food we consume has been genetically enhanced by man in one way or another, with a few exceptions such as wild game and mushrooms. From hybrid strawberries to Bt corn to foods created with radiation mutagenic methods, GMO vs. “Non-GMO” is a false dichotomy.

Seed companies would do right by distancing themselves from the torch and pitchfork-wielding anti-GMO crowd. Instead, companies like Burpee and Buzzy are riding an unfounded, anti-Big Agrochemical wave.

Note: Buzzy Seeds could not be reached for comment.