A couple weeks ago, Chipotle announced they were removing genetically engineered crops (called GMOs) from their menu. Kind of.

Dan Charles at NPR brought attention to one aspect that he called the “superweed” double standard:

… Chipotle points to the problems caused by herbicide-tolerant GMO crops and how they encourage farmers to use a single herbicide, usually glyphosate, or Roundup. This, in turn, has led to the emergence of herbicide-resistant weeds, which Chipotle calls “superweeds.”

Chipotle’s answer to this, per its new non-GMO policy, is to switch from soybean oil to sunflower oil.

The problem is, many sunflower varieties, while not genetically modified, also are herbicide-tolerant. They were bred to tolerate a class of herbicides called ALS inhibitors. And since farmers starting relying on those herbicides, many weeds have evolved resistance to them. In fact, many more weeds have become resistant to ALS inhibitors than to glyphosate.

Why should Chipotle bemoan the emergence of weeds that are resistant to glyphosate, yet not to other weedkillers?

This is a point I’ve made several times in the past.

Herbicides used in the non-GMO alternatives chosen by Chipotle have indeed contributed to more herbicide resistant weeds than the herbicides used in GMO crops. It is pretty clear that if “superweeds” are really a problem Chipotle wants to solve, this is a pretty strange direction to take. 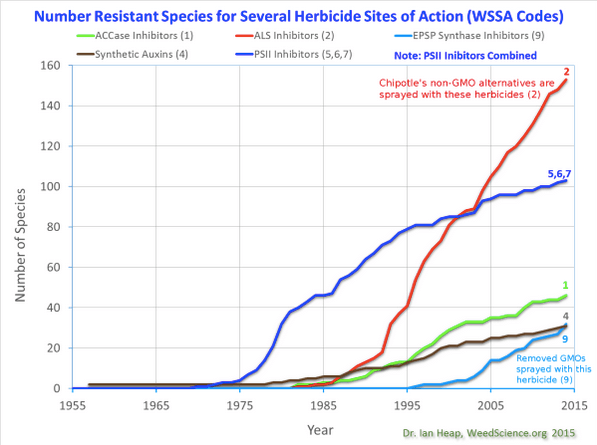 The GLP aggregated and excerpted this blog/article to reflect the diversity of news, opinion and analysis. Read full, original post: What does Chipotle’s switch to non-GMO ingredients mean for pesticide use?