Confessions of former Monsanto employee: “I’m freaking proud of it”

In March, National Geographic published an issue called “The War On Science,” and of all the cities in the entire United States, can you guess which city was called out in the very first paragraph of that article for its anti-science tendencies? Oh yes: it was Portland.

The article went on to say, “We live in an age when all manner of scientific knowledge … faces organized and often furious opposition. Empowered by their own sources of information and their own interpretations of research, doubters have declared war on the consensus of experts… And there’s so much talk about the trend these days … that science doubt itself has become a pop-culture meme.”

Nowhere is this culture more alive than in the city where I live. We’re one of only a few major American cities that don’t fluoridate our water, despite the scientific and medical consensus that it is a cheap and safe way to improve dental health for everyone. We also just narrowly avoided being one of the first states in America to label GMOs; the vote literally came down to less than half a percentage point – I’m almost certain it will return to the ballot and possibly pass next time. There’s a county in Oregon that has banned the growth of GMOs, and there’s another county currently trying to do the same on a ballot measure next week, even though the state has passed legislation to prohibit county-by-county bans. To get around that, Benton County is trying to give legal rights to plants.

Except maybe that’s changing. Why? Because there’s a new grass-roots movement that’s standing up to March Against Monsanto and making an effort to help people better understand GMOs. This Saturday, for the first time, there will be a group of pro-GMO people (YES! Pro-GMO people in Portland!) standing up for science. They’ll be standing right next to a horde of protesters carrying posters with sculls and crossbones, blaming GMOs for every health problem under the sun, and accusing Monsanto of controlling the food supply and killing bees, butterflies, and everything in between.

The pro-GMO group will be holding signs that say, “I heart GMOs” and “Ask me about GMOs.” They’ll be handing out leaflets that talk about all the amazing things GMOs have actually done:  like resurrecting the American chestnut tree from the brink of extinction, saving the Hawaiian papaya, and reducing carbon emissions associated with agriculture equivalent to removing almost 12 million cars from the road for one year. They’ll be approachable. They’ll be honest. And they’ll be accurate. 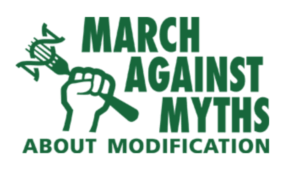 Now that is the kind of movement I can get on board with. And it couldn’t come at a more necessary time. I really believe that in my lifetime, we’ll be facing problems that have the potential to make or break our species. I could give you a bunch of statistics here, but the bottom line is that we have too many people for this planet to support. We’ll

need to make some drastic changes if we want to stay on this planet at all. There are lots of ideas about how we’re going to make that happen, but one thing is for sure: we already have a technology that has the potential to help address many of those problems. Is it the magic bullet? No. Can biotechnology feed every starving person in Africa? No. But it can help. If only we’ll let it.

Some of those are ten or more years away from development, but some of them, like Golden Rice 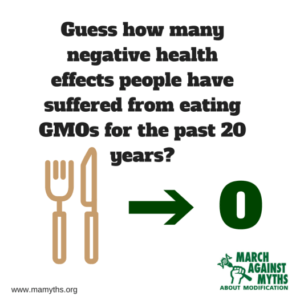 and  Bt eggplant, already exist but are being blocked somewhat in part to hysteria fueled by activists like March Against Monsanto.

That brings me back to this Saturday in Portland. This is where we can help. This is right here, right now. For a long time, academics and scientists have been doing what I call the “soft sell.” They’ve been rather quietly and calmly explaining the science, the safety, and the benefits of GMOs and hoping that eventually it catches on. And maybe for some, it is working. But it’s not working fast enough. We are badly losing the information war on GMOs. Perhaps now is the time to be a little more forceful, and that’s exactly what MAMyths is doing. They’re standing up proudly and loudly to say, “I support GMOs and I want to tell you why.”

Of course, that’s a little scary. Especially in a city like Portland where people might get a little riled up over that. But the good news is they have the facts on their side.  And, even better, they’re real people who aren’t backed by industry. They’re people just like me: with children whose health we care about, who have a very serious vested interest in the sustainability of our food supply.

It’s MomSense is the nom de plume of a mother and former Monsanto employee. She has chosen not to reveal her name because of threats against people who express their support for crop biotechnology.