What’s in a name?

A lot, if the name is genetically modified organism, which many people are dead set against. But what if scientists used the precise techniques of today’s molecular biology to give back to plants genes that had long ago been bred out of them? And what if that process were called “rewilding?”

That is the idea being floated by a group at the University of Copenhagen, which is proposing the name for the process that would result if scientists took a gene or two from an ancient plant variety and melded it with more modern species to promote greater resistant to drought, for example.

“I consider this something worth discussing,” said Michael B. Palmgren, a plant biologist at the Danish university who headed a group, including scientists, ethicists and lawyers.

They pondered the problem of fragile plants in organic farming, came up with the rewilding idea, and published their proposal in the journal Trends in Plant Science.

The researchers wrote that in the United States and Canada, non-G.M.O. foods are prohibited from having genes that could not have occurred in nature in that plant. So adding a gene from an ancient variety of the same plant using precision breeding would be allowed, Dr. Palmgren said. In Europe, the rules are different, they report. There, G.M.O. is defined by the process, not the product.

The idea of restoring long-lost genes to plants is not new, said Julian I. Schroeder, a plant researcher at the University of California, Davis. But, wary of the taint of genetic engineering, scientists have used traditional breeding methods to cross modern plants with ancient ones until they have the gene they want in a crop plant that needs it. The tedious process inevitably drags other genes along with the one that is targeted.

Note: GENeS – the Genetic Expert News Service – provided expert commentary and analysis on the breaking story from independent scientists to the New York Times and other news outlets. GENeS is an outreach project given seed funding by the GLP and affiliated with the World Food Center Institute for Food and Agricultural Literacy (IFAL) at the University of California, Davis that links researchers directly to journalists. 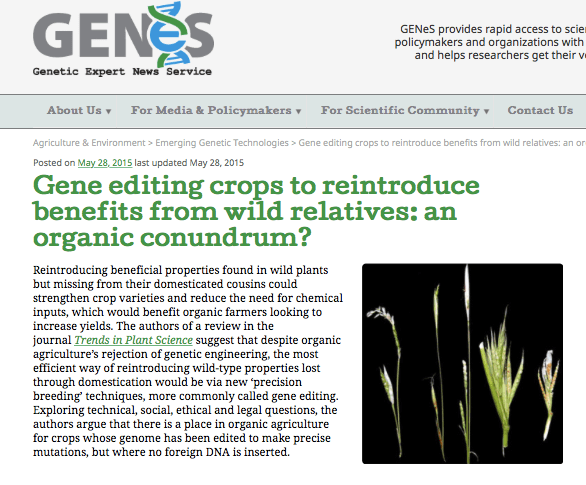 The GLP aggregated and excerpted this blog/article to reflect the diversity of news, opinion and analysis. Read full, original post: A Proposal to Modify Plants Gives G.M.O. Debate New Life