“Water is life” goes the phrase. It’s a biological necessity for all animals and plants. But we are are running perilously short in many places in the world, with California being ‘Exhibit A’ of the crisis in the United States. Despite recent record rainfalls, it could take years for California to return to sustainable water levels if rainfall should resume normal levels, but few anticipate that’s likely to happen. Even the eagerly anticipated El Niño may only provide a minor respite to the crisis. 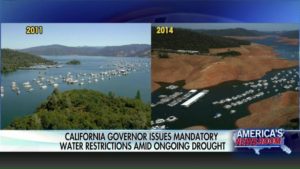 There is a huge irony in California, though — It’s also the world’s epicenter for the use of wasteful bottled water.

This is like one of those situations aptly summed up by the phrase “the cobbler’s children have no shoes.” We seem to be over-saturated with water, conveniently packaged in plastic and glass bottles in just about any location w 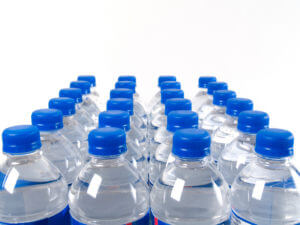 e go to. Yet it seems to be a mis-managed resource slipping through our fingers. Current consumption of plastic water bottles in the U.S. alone is about 50 billion bottles annually. This is a larger number than you may realize. If you stacked 50 billion pennies up (stacked, not just lined up edge-to-edge), it would be about 47,220 miles tall (75,560 km). This is about the average distance driven by a person in the U.S. over three years. What about the bottles themselves? Well, using the assumption of about 8 inches (20.2 cm) tall for a 16.9 fluid ounce (500 mL) bottle, 50 billion bottles end-to-end would reach 6,313,000 miles (10,100,000 km) – this is about 254 times around the Earth.

Now let’s run this thought experiment: Many water bottles purchased for use are never finished, and the the remaining water – sometimes most of it – is thrown away. And even a ‘finished’ water bottle tends to have droplets adhering to the inside of the plastic. What you may think is a trivial amount, this is a few grams in each of the 50 billion bottles – which amounts to a quick calculation of about 150 million liters. This amounts to about a 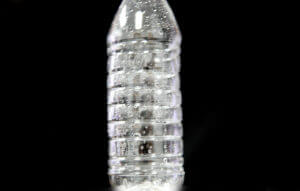 half-liter of pure drinking water for every person in the United States per year. And this is only quantifying the droplet residue – most bottles are discarded with much more water in them, vastly magnifying the effect.

Capped bottles prevent all this water from getting back to us

Another issue to consider is that all the drinking water remaining in the plastic bottles is really quite sequestered — most are capped when discarded to such a degree that they won’t leak, and this by definition means that the water is not escaping back into the environment to be uptaken in the water cycle. In some regions, California is tapping into water sources that are 15,000-20,000 years old, which means we are now accessing water well beyond our ability to sustain it. It has been considered relatively impractical to pump water from other remote locations to California, given how prohibitively expensive it is to move water, (at 1 metric ton per cubic meter) and California is in the process of building the largest desalination facility in the Western Hemisphere as an alternative. Complicating the problem, warmer temperatures will increase evaporation, and depending on the water-vapor pressure of the air, the evaporated water will be carried away from the regions which are already most sensitive to moisture loss. Another tremendous (and tremendously-overlooked) factor which is more than just a mathematical curiosity: As bodies of water become smaller, they tend to present more surface area relative to their volume, and therefore disappear faster due to evaporation – the process becomes a runaway snowball effect, picking up momentum as it progresses.

How have we industrialized water? We need to direct our ingenuity to work for us, not against us

Perhaps the metaphor shouldn’t be with the cobbler’s children – may be more apt is the one about how as Rome burned, Nero played the fiddle. Between asphalt and concrete jungles preventing water from slowly seeping into the ground as its been doing for eons, to extracting and trapping (and discarding) water in plastic bottles, to expanding populations and use of water – it almost seems as if everything we’re doing is designed to conspire against every action Nature performs with water.

As an example of how city sprawl affects the problem, as the Northeast of the United States got larger-than-normal rain and snowfalls (while California had the opposite problem), all of the ground covered by pavement and concrete diverts water in large volumes to places it wouldn’t otherwise go. It naturally would tend to seep and percolate into the ground in a measured way, and undergo natural filtration and evaporation. Instead, shunting it in massive quantities across roads and sidewalks causes catastrophic damage and pooling. As an interesting example of trying to design city infrastructure to return function more toward how Nature would intend it, a section in Boston’s Back Bay was fitted with porous bricks to allow water to seep, rather than flood, slowing the infiltration of water (at a cost of about 20 months and $3 million).

How do we interact with water? Drinking shouldn’t require too much thought

Just like the fact that our heart beats regardless if we think about it or not – and we don’t have to think in order to breathe or sweat – thirst and hydration are two parts of a biofeedback system that are autonomic. Trends suggesting that the public should over-consume water come and go; and there’s no robust science behind the convenient suggestion of the ‘8-by-8 rule’ (8-eight ounce glasses of water per day). Humans have an incredibly well-calibrated thirst mechanism, where thirst is triggered when up to about 1 percent of an individual’s body weight is lost in fluids (dehydration is defined as fluid loss of 1 percent or greater of body weight). Likewise, we have very accurate osmotic receptors on our tongues so that we tend to know how much of a particular liquid to drink to satisfy our thirst and need for fluid. Over-hydrating doesn’t confer any health benefits, and is associated with risks including hyponatremia and death.

Another misconception circulated in the public is that caffeinated drinks are dehydrating. Most fluids that people drink are actually net hydrating, except for alcoholic beverages. While caffeine is a diuretic, which would tend to trigger a loss of body water because of feedback with anti-diuretic hormone (ADH) in our bodies, levels of ADH adjust very sensitively and precisely. Though some fluid is lost by the diuretic effect, more fluid is gained from the beverage in almost every case.

Clearly humanity’s future depends on how we manage our interactions with water. This takes the form of how we package it, move it around, pollute it, and consume it.

It’s not too late for us to develop policies and activities to slow further progression of this problem, but we can’t assume that we have forever.

Ben Locwin, Ph.D., M.B.A., M.S. is a contributor to the Genetic Literacy Project and is an author of a wide variety of scientific articles for books and magazines. He is also a neuroscience researcher and consultant for a many industries including food and nutrition, pharmaceutical, psychological, and academic. Follow him at @BenLocwin.