inteNeil Young’s released a 10-minute documentary “Seeding Fear: The Story of Michael White vs. Monsanto” on his Facebook page, timed to coincide with the U.S. House of Representatives vote on the Safe and Accurate Food Labeling Act, dubbed the Deny Americans the Right to Know (DARK) Act by opponents.

The last-ditch effort to inflame the debate did not change the outcome. The bill, which would if passed in its present form [which will not happen, as a Senate version is considerably different and is a long shot even then to pass] would restrict states from having separate GMO labeling regulations and provide federal guidelines for voluntary labeling, passed 275-150. Next, the Senate will debate the bill.

The mini-doc tells the story of Michael White, who was sued by Monsanto for saving patented soybean seed and lost. The film is the latest in Young’s media campaign against Monsanto, which includes his recent album, “The Monsanto Years.” Last fall, he boycotted Starbucks accusing them of affiliating with Monsanto because they were members of the Grocery Manufacturers Association, which sued Vermont in opposition to the the state’s mandatory GMO labeling law.

Introducing the film, Young wrote on his Facebook page:

A Message From Neil Young – As I write this, the Dark Act is up for a vote in the House of Representatives; representatives of the people. The Dark Act takes away the rights of those people to vote for or against things like GMO labeling in their states. It does seem ironic. If the act is passed, it will truly be a dark day for America. Monsanto is a corporation with great wealth, now controlling over 90% of soybean and corn growth in America.

Family farms have been replaced by giant agri corp farms across this great vast country we call home. Farm aid and other organizations have been fighting the losing battle against this for 30 years now.

Dairy and meat farming is done in those white sheds you see from the freeway, no longer on the green pastures of home with the old farmhouses and barns. Those beautiful buildings now stand in ruin across the country. This has happened on our watch while the country slept, distracted by advertising and false information from the corporations. Monsanto and others simply pay the politicians for voting their way. This is because of “Citizens United”, a legislation that has made it possible for corporations to have the same rights as people, while remaining immune to people’s laws.

Both Democratic and Republican front runners are in bed with Monsanto, from Clinton to Bush, as many government branches are and have been for years. This presidential election could further cement the dominance of corporation’s rights over people’s rights in America. If you have a voice you have a choice. Use it.

On the human side, the film I would like you to see tells the story of a farming family in America, but the same thing is happening around the world. It is a story that takes 10 minutes of your time to see. It is a simple human one, telling the heartbreaking story of one man who fought the corporate behemoth Monsanto, and it illustrates why I was moved to write The Monsanto Years.

The film presents a rare opportunity to hear from the source as Mr. White is one of only four farmers who is still legally allowed to speak about his case as all the others have been effectively silenced.

Thanks for reading this and I hope you look at this simple and powerful film, “Seeding Fear”.

There is no science or factual information in the film; it’s just agit prop, an appeal to raw emotions. The documentary misrepresents the real story. White is no victim. In court documents, Monsanto Company versus Michael White, Wayne White, White’s Seed Cleaning, and White Farms Feed & Seed, White admitted to knowingly planting, producing, saving, cleaning and selling Roundup Ready soybeans illegally. According to the court records, White started saving Roundup Ready seeds on his family farm in 1998. He continued to do so in 1999, and at this point, he began selling the seeds to Alabama farmers. Mr. White continued this practice in 2000, 2001 and 2002, at which point Monsanto realized he was saving and cleaning patented seeds.

Monsanto approached both Wayne and Michael White with evidence, and ended up dismissing the case against Wayne when Michael admitted to farming in his father’s name. After a couple years of legal actions, the company settled with Michael in 2006. Again, Michael White admitted he knowingly planted, produced, saved, cleaned and sold Roundup Ready soybeans, which are protected by a patent.

The documentary has numerous other misrepresentations, among them:

Despite Young’s misrepresentations, Robb Fraley, the chief technology officer at Monsanto, nonetheless has responded to Young’s ongoing attacks, even inviting him after the release of his attack album “The Monsanto Years” to visit the company and commence a dialogue: 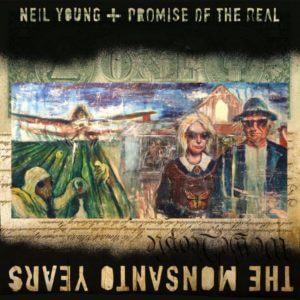 The Monsanto Years,” makes me sad. It reminds me once again what a lousy job we have done in communicating about our business and engaging in dialogue around science with the public.

If you listen to the new album, you’ll hear a rehash of many of the myths we’ve long heard about our company. Unfortunately, some of these myths are now so well-established in some circles that people don’t even question them. Young suggests, for example, that our company is making life more difficult for farmers, that we bully them with lawsuits, and that we‘re all about greed. None of this is accurate.

The truth is that farmers are our customers, and our 22,000 employees focus on improving their operations and their lives. If we didn’t, we wouldn’t have those customers for long. They have many choices.

Will Young agree to learn about the science of genetic modification and the facts of the debate over the future of farming? Or is he so fixed in his ideological viewpoints that dialogue is off the table?

NOTE: This article was updated on July 27 by editor Jon Entine at 3:56pm et to include analysis of specific claims made in the Michael White film.