As someone who has watched too much TV in her life, I’m a fan of your work. Ms. Paltrow: I’ve enjoyed so many of your movies over the years. I remember watching your Academy Award acceptance speech and getting a bit teary-eyed. Ms. Dunham: To be honest, I haven’t watched “Girls” yet, but my coworker regularly entertains me with stories of the show (she has a huge crush on Adam Driver) and I hope to binge-watch it someday.

As such, I was crestfallen to read that you are both supporting efforts to label foods containing ingredients derived from transgenic organisms. As a scientist with no affiliation with agricultural biotechnology (i.e. no stake in the game), I wanted to share with you why I changed my thoughts on labeling. When I started reading about GMOs, my initial reaction was “If people want GMOs labeled, then why shouldn’t they be labeled?” With time, I’ve changed my stance on the matter and I wanted to outline a few reasons why. Additionally, I have a request to make down below.

To date, there is no solid research that has demonstrated that eating GMOs cause harm. I’ve read a few of the studies that are held up by anti-GMO activists as evidence of harm and the vast majority have been very poorly designed. Scientific organizations around the world have stated that GMOs pose no more of a risk than crops bred using other methods.

Many anti-GMO advocates fight for labeling based on the opinion that labeling is not about food safety: rather it is about their “right to know”. As I’ve followed this story, the editorial boards for major news publications across the country, including the Washington Post and the New York Times, have questioned the arguments behind “right to know” campaigns based on the fact that it simply does not offer any important information.

In the end, the only argument that stands is knowing for the sake of knowing. For the sake of transparency about how our food is produced. If that is truly the case, then all forms of trait development should be labeled and I’ve included an infographic below indicating the many techniques used in crop development. Why do anti-GMO activists feel that it’s their right to know about only 1/6 of the methods used below? 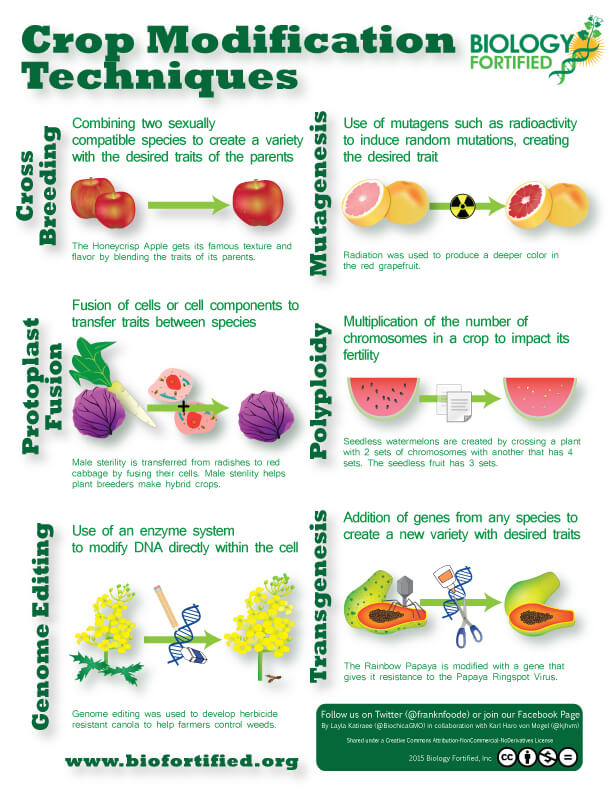 There are many other arguments against labeling, including the fact that there’s no clear definition for a GMO ingredient and that the segregation of GMOs from non-GMO ingredients will add cost to the food supply chain.

We’re lucky to live in a country where our farmers can grow anything they’d like, using whatever methods they’d like, and grow their own seeds or ones purchased from any company they’d like, as long as they follow guidelines and laws outlined by our regulatory agencies. We, as consumers, have the choice of purchasing a plethora of foods safely grown using these methods, many of which are voluntarily labeled. As such, if someone is interested in avoiding GMOs, they already have the option of doing so by purchasing foods voluntarily labeled as non-GMO or by purchasing organic foods certified under the USDA’s organic label, which excludes GMOs. Basically, if you don’t want them, you’ve got a lot of options, and that’s a great deal more than many nations around the world.

So, here’s my request. The two of you have been blessed with being in a position where you can impact a lot of people. Your voices are heard and the ridiculous paparazzi write about your every move. At the beginning of this article, I wrote that I was crest-fallen that you’d taken up this cause, and it’s because I really wish you had dedicated your valuable time and effort to something that could really change things in our society, like reducing gun-violence or getting more girls involved in STEM. But since it would be incredibly impertinent of me to decide what you do with your time, this is my request: I’d like to ask that you chat with a few respected scientists about this. Not me. Hellz no. I’m a human geneticist writing about this stuff as a hobby. Go to whatever respected university is closest to where you live, and chat with a professor of agronomy or plant genetics. And not somebody who is recommended by GMO-Free USA or Food Democracy Now. Ask a normal everyday specialist in crop breeding. Ask her what she feeds her family. Ask him if he’s worried about GMO labeling.

I wish you all the best in your endeavors.

PS: Can one of you produce a movie about a kick-ass woman scientist who’s a superhero or maybe saves the world from something or other? I’d love to see such a movie made and I think my son would too.

This article originally appeared on the FrankenfoodFacts blog and is reproduced here in full with permission of the author, Layla Katiraee, who holds a Ph.D. in molecular genetics from the University of Toronto and is a senior scientist in product development at a human genetics instrumentation company in California. All opinions and views expressed are her own. You can follow her on Twitter at @BiochicaGMO. Her LinkedIn profile is viewable here.