Finding the right time in an over committed life to have a child can be challenging. Pressures of work and the right partner are two reasons women often cite for delaying childbirth. The average age for first birth in the U.S. is now 28, and is likely to keep increasing. For many woman, excusing themselves from the workforce for a few years, or even a few months of maternity leave, just doesn’t seem feasible.

Of course, healthy women who fit this profile naturally look at ways to extend their fertility until they find the right partner, for instance, or have sufficient financial resources to take on child-rearing by themselves. Freezing and storing eggs is probably the best option. In the last year the American Society for Reproductive Medicine announced that egg freezing technology was advanced enough, and successful enough, that healthy women could use it to delay family life. Previously, the procedure had been well-established for women with fertility issues or women undergoing medical treatments that would decrease or destroy their fertility.

The real issue is whether the advertising, and even some of the medical commentary, surrounding egg freezing and its success rate, are misleading. In reality one egg only has a 2 to 12 percent chance of making it to a live birth. Take a recent study that ‘proved’ the cost effectiveness of egg freezing. Here’s the resulting analysis from the Baby Budgeting study: 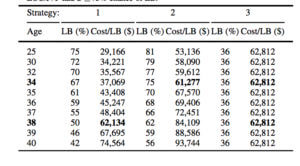 For reference: Strategy 1 was egg freezing with no IVF, Strategy 2 was egg freezing with IVF, Strategy 3 was just IVF at 41 years old. All the percentages for live births are at 41 years old. So, a woman who just did IVF at 41 had a 36 percent chance of having a baby at the cost of $62,000. That’s the worse case scenario (in this study). If you froze your eggs at 40, then did IVF a year later, you would have spent $74,000 and only increased your chances of carrying a baby to term by 6 percent for that extra $12,000.

But what is the best case scenario for the study? If you freeze your eggs at 25, have IVF at 41 and spend $53,000 to do it, you’ll still have a 20 percent chance of not getting pregnant despite the effort and expense. As the age of egg harvesting increases, the chances of procedure failing also increase.

Basically, even with the best case scenario, egg freezing is not a sure thing. In fact if you’re 38 and are willing to do egg freezing but unwilling to do IVF, you’ve only got a 50 percent chance this is going to work…$60,000 later. Its like buying a Mercedes that is only 50 percent likely to start. This handy calculator let’s you play around with egg freezing variables and see the resulting live birth numbers.

So, while some experts may tout the ability of egg freezing to revolutionize family planning, we’ve got a long way to go before this technique could be something all women can count on when planning their futures.

The other aspect is the huge cost, uncovered by most insurance (unless you work for Apple or Facebook). Because of the thousands of dollars for each round of hormone treatments, followed by out patients surgeries, then storage, then thawing, the average cost in the Baby Budgeting study for a 25 year old egg freezer was $29,000. Perhaps women can start rolling these costs into student loans. Access to this kind of procedure is, at least for now, limited to wealthy women. Will that perpetuate the economic inequality that so many people feel is already a critical problem in the U.S.?

Women have advanced to the heads of boardrooms and heads of state. But men and women alike remain fundamentally biological creatures vulnerable to some hard rules of nature: we will age, we will die and if we are women, we will lose our fertility. As humans, we look to circumvent those rules wherever we can. Fertility is not different, writes Moya Sarner at the Guardian. In contemplating her own decision to freeze eggs or not, she spoke to many women who had. One of those women, Lydia Cowell described her decision:

It puts you on a more level playing field with men. As women, we’ve got this clock ticking over our heads that men don’t have, and it’s a clock that we’re not aware of until we’re in our 30s. You just don’t think about it – you’re so obsessed with contraception, you never think about conception. Freezing my eggs massively took the pressure off, as I had one less thing to worry about. You can’t control when you meet someone, you can’t control when your fertility starts to decline; this felt like a positive step towards taking back control.

Egg freezing falls into a less controversial legal framework because a woman has sole ownership of her eggs, rather than say embryos which are owned by both parents. But it still falls victim to some strange regulatory areas depending on the country in which you live. China bans single women from accessing egg freezing at all. The ban, it argues, encourages women to have children rather than wait. But since China needs more young people not less, it might be counter intuitive. In the UK, as Sarner notes, eggs can only be stored for 10 years before they must be used or destroyed. That’s what ultimately kept her from going ahead with egg freezing, because she would only be 39 by the time she had to use them or lose them.

But by waiting, Sarner takes another risk. Younger women are superior egg harvesters in terms of quantity and quality. When it comes time to use those eggs, more is better. And younger women fare better during IVF and other assisted reproductive techniques. Fertility in this regard is still very much a numbers game: on the one side you have dozens of eggs and on the other you have tens of thousands of dollars.

Egg freezing is a big business with a ton of growth potential. And at least some clinics are not only fertility specialists, they’re also banks. EggBanxx, for example, is not only ready to offer you reproductive health services but also the necessary financing plan to match. This is not to say that women should not be freezing their eggs, delaying childbirth, staying in the workforce or leaving it. But, they should have all the facts and numbers before buying in.