Brazil’s latest home-developed genetically modified soybean is expected to be planted in the coming months after gaining formal approval in August. The new GM variety is tolerant to herbicides of the imidozolinone class.  Beans are as ubiquitous on Brazilian dinner plates as corn tortillas are in Mexico.

The culture system was developed over 20 years of technical cooperation between Empresa Brasileira de Pesquisa Agropecuária (EMBRAPA), a state owned company affiliated with the Brazilian Ministry of Agriculture, Livestock and Food Supply, and the private sector. The transgenic soybeans are paired with an herbicide designed to control broad-spectrum of narrow and broadleaf weeds. The agrochemicals can be applied from the initial planting until the early stages of plant growth.

Brazilian farmers now have another option for the rotation of technologies to manage weeds in soybeans, officials said. “The balance between crop rotation, the alternation of technologies and use of agrochemicals with different mechanisms of action reduces the weed selection pressure,” noted Adriana Brondani, executive director of the Council for Biotechnology Information (CIB) of Brazil.

The new herbicide-tolerant GM soybean will be launched initially in the states of Bahia, Goiás, Mato Grosso, Mato Grosso do Sul, Minas Gerais, Paraná, Rondônia, São Paulo and Distrito Federal. The distribution takes into account the characteristics of the cultivars that will be placed on the market in the 2015/2016 season. The technology is also approved for import in 17 countries, including China, the largest global importer, and the European Union, which is a huge buyer of soy meal.

Brazil is currently one of the world’s leading developers of genetically modified crops. It is the second largest grower in the world after the United States with 104 million acres in production in 2014, 72 million of that GM soybean. More than 93 percent of the country’s soybean crop is GM and almost 90 percent of the corn crop. GM cotton, more recently introduced, makes up 65,1% percent.

The technical committee in charge of approving new GM crops in Brazil is the CTNBio (Brazilian National Technical Commission on Biosafety), which was created in 2005 with the new “11.105 law” of biosafety, which replaced the previous 1995 law. The CTNBio is considered one of the most effective commissions worldwide, with a clear biotechnology regulatory framework and functional approval processes, and the the Brazilian regulatory process is internationally recognized as one of the strictest and most complete.

EMBRAPA is developing a range of new GM products, including soybean and sugarcane drought-resistant, folate-fortified lettuce, soybean as a biofactory of HIV antibody and a virus-resistant bean expected to be commercially launched in 2016. 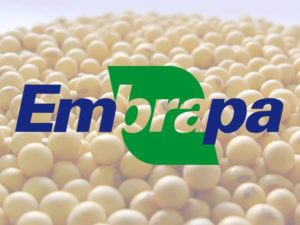 Other Brazilian institutions working on the development of new GM crops include FuturaGene Brasil Technology Ltd, which developed a fast growing GM eucalyptus with 20 percent of higher productivity (between 30 and 40 percent more for use in other applications such as bioenergy). Despite environmentalist opposition and vandalism attacks on their experimental greenhouses in Sao Paulo, this GM Eucalyptus was approved for commercial release by the CTNBio in April.

Also the Centro de Tecnologia Canavieira (CTC) is working on genetically engineered varieties of sugar cane, a major crop in the country; the Federal University of Rio de Janeiro has worked to develop insect-resistant GM rice, the Federal University of Viçosa is developing drought-resistant GM bean, and Fundecitrus is developing a GM citrus resistant to citrus cranker and citrus black spot.

The new herbicide-tolerant GM soybean will be launched initially in the states of Bahia, Goiás, Mato Grosso, Mato Grosso do Sul, Minas Gerais, Paraná, Rondônia, São Paulo and Distrito Federal. The distribution takes into account the characteristics of the cultivars that will be placed on the market in the 2015/2016 season. The technology is also approved for import in 17 countries, including China, the largest global importer, and the European Union, which is a huge buyer of soy meal.

Why has Brazil’s unabashedly left-wing government embraced GMOs so strongly while other left learning countries, particularly in Europe, have been more hesitant? According to an analysis in Bloomberg News:

Brazilian farmers, lacking the sort of subsidies and price supports that the U.S. government showers on its politically important farming class, are more price-sensitive when it comes to such things as seeds, pesticides, and herbicides. Brazilian farmers have that much greater reason to embrace seeds that yield more or require fewer pesticides and herbicides, as some GM varietals do, says Mark Langevin, director of Brazilworks and an international adviser to the Brazilian Cotton Producers Association. And the Brazilian government has made a priority of attaining energy independence through sugar cane ethanol, which is driving genetic modification programs such as that at CTC, a giant bio-factory.

Brazil is also relatively more open to using GMOs as part of the agricultural arsenal, in part because it is such a commodities-exporting powerhouse.

Another factor supporting this technology in the country are the clear economic and environmental benefits. Acording to Brookes and Barfoot the economic benefit to Brazil from GM crops for the 10-year period (2003-2013) is $11.8 billion, $ 3.4 billion for 2013 alone; and GM crops have reduced the environmental impact by using less herbicides and pesticides compared to conventional crops. Another important environmental benefit is saving water. A study by the Brazilian consultancy “Céleres Ambiental” concluded that between 1996 and 2009 GM crops saved more than 12 billion liters of water. Also between 1996 and 2009 the GM technology helped save 105 million liters of diesel fuel used in tractors, an amount equivalent to supply a fleet of 43,700 vehicles over the same period. This involved reducing the emission of 270,400 tons of CO2 into the atmosphere.

All these economic and environmental benefits can be further improved if Brazil continues to advance in the production of GM crops and facilitating their development at public and private level.

Daniel Norero is a student of biochemistry and works in the Laboratory of Molecular Plant Pathology at the Catholic University of Chile. Is the founder of the hispanic biotechnology advocacy movement “Sí Quiero Transgénicos” and also writes for the Chilean Skeptical Association and LatinAmericanScience. Follow @DanielNorero on Twitter.