At least half of the Boston College men’s basketball team and several other Boston College students are suffering from gastrointestinal problems after eating at a nearby Chipotle, according to multiple reports. The college gave this statement about the matter to the Boston Herald:

Several BC students and student-athletes, including members of the BC men’s basketball team, have reported to BC Health Services complaining of gastrointestinal symptoms,” according to a statement from the college. “Students who are experiencing these gastrointestinal symptoms are encouraged to seek medical care either at BC Health Services or from their own physician.

All Boston College athletes were also sent this clearly hastily written and panicked email about not eating at “CHIPOLTE’S!!!!!”: 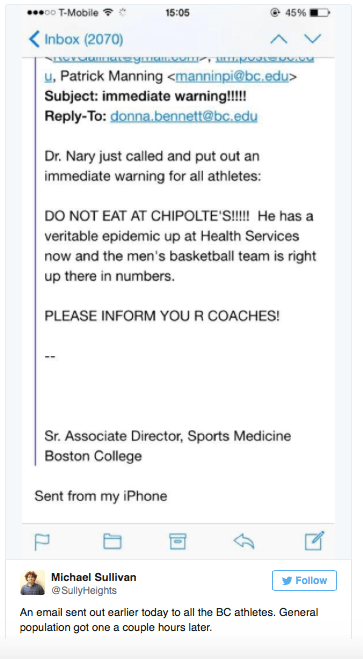 SB Nation reports that eight sick Boston College players are confirmed to have E. coli, and that there are an additional two players on the roster also suffering from “stomach issues.” Unsurprisingly, today’s practice was cancelled.

Chipotle is currently under siege from a nationwide E. coli outbreak that they have been unable to find the source of or halt, which is sending the company’s stock price tumbling.