This is the first of three posts examining the topic of GMOs and patents. As the first post in the series, I’ll provide an overview on the topic of patents and will describe the concept of “terminator genes”; the second post will examine a few high-profile lawsuits brought against farmers for using GM seeds, and the final post will examine whether there have been cases of lawsuits brought against farmers due to inadvertent contamination.

Before I continue, I must add an important disclaimer: as a research scientist developing genetic assays, my income relies on the fact that I help make unique products whose patents are protected and defended. It takes years to develop a well-functioning product, and companies rely on patents to recover the heavy investment made in R&D. Even when I went through grad school, we signed documents regarding patents (basically outlining how anything we discovered would be property of the University/Hospital). As such, I believe that patents have a purpose, which is the same purpose as copyrights/patents on art, music, electronics, and software: to respect the work of its authors. To have a product reverse engineered at a fraction of the price the year after a product’s release is highly unethical and I believe that patents can prevent such incidents from happening.

My perspective is that if consumers don’t like the fact that the item they’re purchasing is patented, they can try to find an item that performs the same function that is open-source or off-patent. It is also important that this not be misconstrued into an argument supporting excessive earnings or corporate rights, nor do I believe that patent laws are perfect.

With that in mind, let’s investigate the topic of intellectual property surrounding seeds.

The International Union for the Protection of New Varieties of Plants (UPOV), is an organization established about 50 years ago with the express purpose of protecting new varieties of plants with Intellectual Property laws. The organization has a long list of member nations, including the U.S., Canada, Chile, and many nations in the EU. The plants protected under its laws are not only genetically modified plants, but also plants generated through traditional breeding. In order to be granted breeder’s rights, the plant variety must be new, distinct, and must be genetically stable and uniform (basically meaning that each seed should be genetically identical to the next). The breeder’s rights are then protected through legislation in each member nation. Breeders can license their technology to other companies or institutions. There are also exemptions, including uses such as research and subsistence farming.

Some transgenic crops are coming off patent (which basically means that a patent has expired). Monsanto’s Round-Up Ready Soy Bean came off patent late last year, and became the first open-source or generic GMO. Karl Haro von Mogel wrote about the implications of this event in this blog post.

It must be stressed that GM seeds are not the only plants to have patents. Decorative plants, such as orchids and roses, are commonly patented as well. Pluots didn’t just appear in a day: their development took much research and trial/error. As such, there are patented varieties of pluots. Thus, the patenting of seeds is much broader than just GM crops (see here and here for unofficial lists of patented plants).

Before I started learning about GMOs, I had heard about “Terminator Genes” and had been under the impression that many genetically modified seeds used this technology. Legend has it that GMOs are sterile due to terminator genes, which forces farmers to buy seeds from one season to the next. In reality, terminator genes do exist, but they have never been commercialized. The bulk of the information in this section is summarized in the freely available article “Genetic use restriction technologies: a review“.

The technical name for Terminator Gene technology is “Genetic Use Restriction Technology” or GURT, and there are two types of GURTs: varietal GURTs (V-GURT) and trait GURTs (T-GURT). V-GURTs allow breeders to develop plants that grow and form seeds, but the second generation of seeds is sterile. There are different types of V-GURTS, including some designed to prevent gene-flow or “cross-contamination” between transgenics and other crops. The T-GURT technology has the trait (herbicide tolerance, biofortification, etc) controlled by a molecular switch which is activated by a chemical or some other stimulus, such as heat. Using this technology, breeders would provide farmers with “activated” seeds which would have the trait of interest, but the seeds of these crops would not have the trait activated. 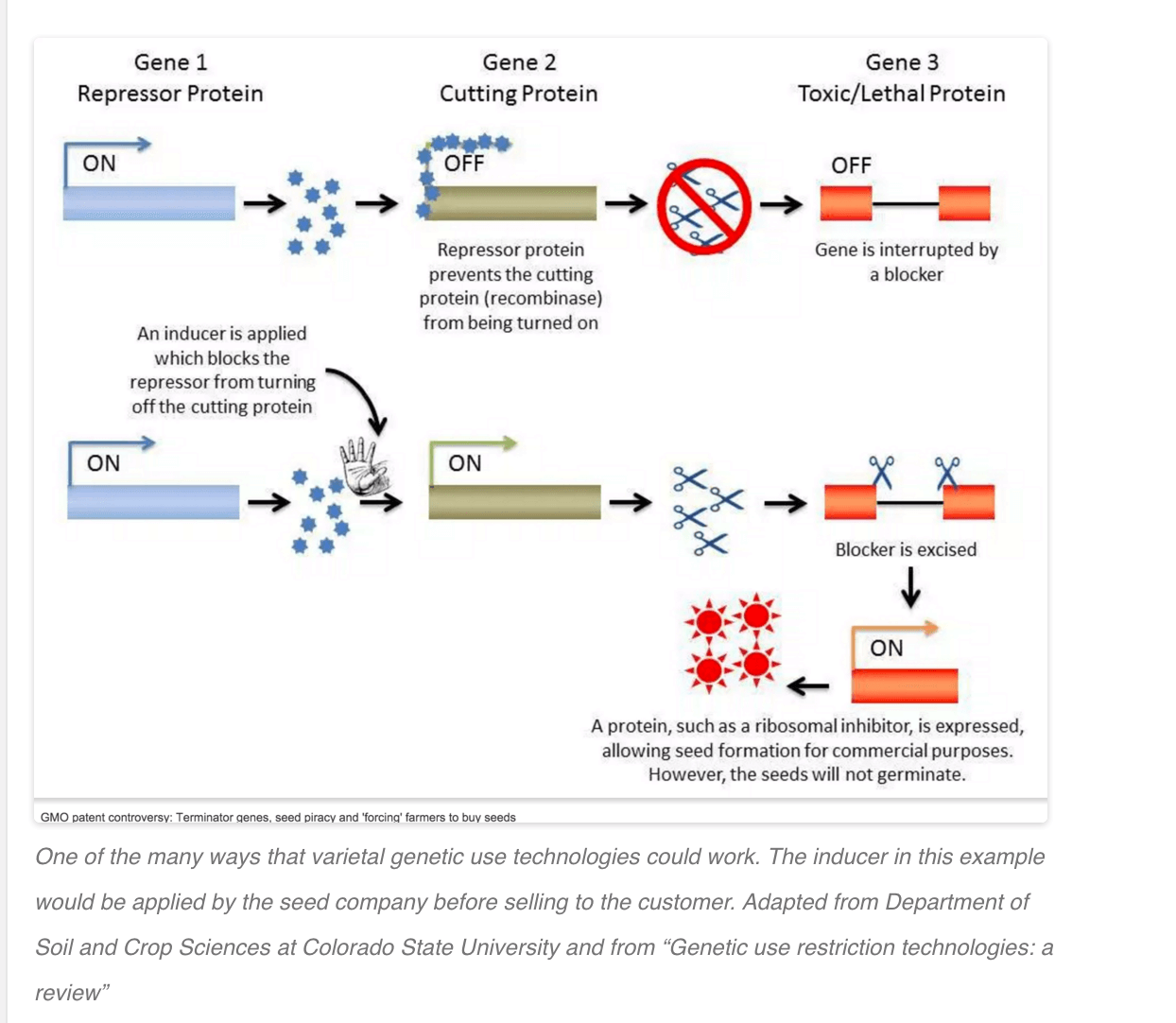 Due to these protests, agricultural companies began stating that they wouldn’t use GURTs, including Monsanto who acquired Delta & Pine Land Company in 2007. Yet, despite such statements, the number of patents on GURTs by public and private institutions/companies has not ceased, suggesting that companies are still seeking the “development of alternative strategies to prevent the unauthorized use of patented seeds and plant varieties“.The first patent for a GURT was filed in 1991 by Dupont, followed by a second one in 1992 by a company now owned by Syngenta. But the topic of GURTs never caused much ruckus until a patent was filed in 1995 by the USDA together with the Delta & Pine Land Company for seed sterility by means of a “genetic switch”. This patent was promoted in scientific publications and other fora, and the term “Genetic Use Restriction Technology” was adopted to describe it. Many groups started protesting GURTs, including NGOs, farmers, and the general public, primarily due to the fact that many farmers in developing nations practice seed saving. Several papers published around the time examined the impact that GURTs may have in developing countries and predicted that it would likely “increase the polarization between commercial and subsistence farmers, as well as between developed and developing regions and societies” (see here and here and here).

Seed piracy is a serious issue. Setting aside the millions of dollars in revenue loss for companies, seed piracy can mean that seeds are being sold and planted in regions where they have not been approved. As this BBC story outlines, crosses are being performed by farmers using GM seeds and local varieties. Often times the transgenic seeds were developed using strains not suited for the climate where they are being illegally grown, which has led to crop loss. As such, GURTs can be an important regulatory tool, as well as an important revenue generating mechanism for companies. However, most analyses I read highlighted how GURTs will most likely widen the gap between developing and developed agricultural sectors. T-GURTs may be a viable solution, so that farmers in developing nations can replant the seeds but would not benefit from the biotech trait that has been introduced in them. However, if the trait is not active, there isn’t much value in the seed. As such, I feel that it is best not to implement GURTs until an ethical solution is envisioned.

If GMO seeds are not sterile, how do companies prevent replanting of seeds?

Instead of using Terminator Gene technology, ag-businesses have their customers sign a contract whereby they obtain an annual license. Here’s a copy of Monsanto Technology Stewardship Agreement and here’s a copy of Syngenta’s agreement (I was really surprised at how short the documents were. I was expecting something similar to the 56 pages in the iTunes Terms of Agreement). The clauses are fairly straightforward. As an example, by signing Monsanto’s Stewardship agreement, you agree not to sell or distribute the product in regions where the product is not registered. You agree to follow all the directions and instructions for growing the product, particularly EPA restrictions. The document outlines that if Monsanto believes that a customer has retained seeds, the company will request all the appropriate documents to determine if new seeds were purchased. Monsanto also has the right to test and inspect a grower’s field.

Such agreements are not unique to GMOs. BASF’s Clearfield seeds, which are herbicide tolerant but are not transgenic, have stewardship guidelines very similar to the examples provided above.

Despite the availability of copies of licensing agreements online, many activists believe that farmers are forced to buy seeds from companies annually. Farmers have written about the choices they have when purchasing seeds (see here, here, and here). By purchasing seeds from a company, in no way is a farmer locked into a life-long contract: as outlined in this post, farmers can even choose to buy glyphosate/Round-Up from a different vendor when buying Monsanto’s Round-Up Ready seeds. Farmers can choose whichever seeds they’d like, from whatever company they prefer, be they GMO or not, patented or not.

It is equally important to note that many farmers buy new seeds each season, even if the seeds are not GMO or are not under a licensing agreement. This is due to the fact that seeds are often sold as hybrids, a fact explained in this video. Briefly, hybrid seeds have the “best” of the traits that breeders were looking for. However, once these plants grow and produce seeds of their own, it is unlikely that the latter will have all the beneficial traits present. So many farmers choose to repurchase new seeds each year to get the best crops they can.

In the next post, I’ll go over a few key lawsuits between farmers and Monsanto.

Layla Katiraee, contributor to the Genetic Literacy Project, holds a PhD in molecular genetics from the University of Toronto and is a senior scientist in product development at a biotech company in California. All opinions and views expressed are her own. Her twitter handle is: @BioChicaGMO.