David Despain | April 28, 2016
This article or excerpt is included in the GLP’s daily curated selection of ideologically diverse news, opinion and analysis of biotechnology innovation.

Farmers have always relied on a variety of different ways to collect information about how to best grow their crops. They walk their fields, picking up a handful of soil to judge its moisture content, and looking closely at leaves of the plants to gauge their health.

It should come as no surprise that most farmers readily understand the value of technology to more rapidly and thoroughly collect crop data, in larger volumes, for the purpose of turning it into usable information. More than half of U.S. farmers already gather massive amounts of information through the use of “big data” technology-enabled tractors and other farm machinery.

There’s no shortage of data being collected by farmers who are keen on the idea helping them make better decisions about their crops. The question is really how to sift through that data and make sense of it to increase the efficiency of food production — like determining when to best use fertilizer or pesticides, what seeds to use, or how deep to plant the seeds. In a word, big sums up the challenge of getting beyond what has until now been only big promises of “big data” in agriculture. Farmers’ expectations are that these gathered data points will eventually lead to savings or improved yields. But so far up to 80 percent of those data points collected never end up in any form that will lead to tangible benefits, according to John Fulton, an associate professor of food, agricultural and biological engineering at Ohio State University.

For the sake of future food security and sustainability, it’s a problem that needs to be addressed. There’s actually a lot at stake if “big data” is really intended to be one of the tools necessary to feed nine billion people by 2050. Right now, small farmers are just not seeing enough value in it — and that’s regardless of how many times agricultural corporations Monsanto, John Deere or Dupont tell them that “big data” is going to be “revolutionary.”

These companies have poured billions of dollars into farming data analytics and launched “prescriptive planting” platforms, such as Monsanto’s FieldScripts and DuPont’s Encirca platform, which are intended to drive precision agriculture and greater sustainability. But so far the technology has largely failed at delivering a return on investment for farmers. The reason is that there just really hasn’t been much of an impact in terms of presenting usable information farmers can use readily for creating savings or improving yields.

For farmers who’ve adopted use of “big data” technologies, there is a growing distrust of the larger organizations selling them on it. For instance, farmers worry that their information will be misused in some manner by corporations or government, such as to predict rises and falls in commodity markets. Another fear is that the data could be hacked by or sold off to competitors, or used by lawmakers to enforce new regulations. Additionally, there are other concerns such as the large investment into precision agriculture tools that might decrease the incentive for farmers to focus on other methods of reducing impact on the environment. The increased use of computerized technology in farm machinery also creates other issues for small farmers, such as the inability to fix or adjust equipment, forcing them to risk delays and expenses when reaching back to manufacturers for appropriate technical support.

But should farmers really be reluctant to adopt “big data” technologies or distrust the possibility of actual precision agriculture benefits? Up until now there has been no evidence of misuse by any of the agricultural corporations like Monsanto and Dupont and they’ve given reassurances to farmers that their data will remain private. Still those considerations don’t solve the real problem: lack of any tangible benefits to farmers. What farmers need is a real return on investment for adopting “big data” technologies in terms of increasing profits or saving on costs of production of food. 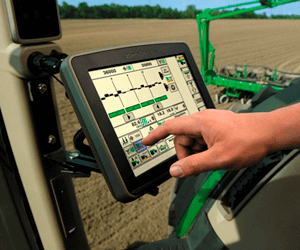 The solution to what’s needed from “big data” is this: for technology developers to find ways of taking the deluge and turning it into knowledge that meets the strategic and tactical goals of farmers, according to Mark Bünger, Lux Research Director who recently co-authored a report titled, “Big Data in Precision Agriculture.” Those goals must include increasing profitability and minimizing environmental impact of crops. Tangible benefits to farmers could come in a variety of ways. In the Lux report, Bünger and other analysts identify five categories technology developers should focus on based on an analysis of 120 use cases:

The plant-prescription technologies currently used, like Monsanto’s FieldScripts, already are on their way to achieving some of these goals. In addition, the software helps farmers decide on plant spacing and depth based on a crops genetics or soil quality. And it’s difficult to really predict just how much of an impact any given feature will have on the farmers’ profits in the future.

But the most likely scenario is that not any one feature of collection or analysis of large amounts of data — or the entirety of the idea of big data by itself — will truly revolutionize agriculture. The reality is that only through a combination of big data use with other new crop technologies and methods are farmers most likely to see true results in the form of increased efficiency of food production.

David Despain, M.Sc., is a science and health journalist based in Gilbert, Ariz. Follow @daviddespain on Twitter.