Africa is under attack. But who is the perpetrator and who are the victims?

According to Henk Hobbelink, a Dutch agronomist and founder of GRAIN—a non-profit that campaigns against crop biotechnology and modern farming techniques—the menace is Big Ag, with GMOs as their weapon of choice. Hobelink, according to the GRAIN website, promotes “small farmers and social movements in their struggles for community-controlled and biodiversity-based food systems

Hobbelink has been touring Uganda and other African countries in an attempt to kill growing support among farmers for genetically modified bananas that are resistant to banana wilt, which is devastating the crop. His message: countries that are growing GMO crops, the United States in particular, do not dare feed them to humans but use them exclusively for animal consumption—which is a lie.

The U.S. grows a dozen types of genetically modified crops including sweet corn, soybeans, sugar beets and papaya, which are all for human consumption.

But Hobbelink’s misrepresentations have not stopped the local media, which is reporting extensively on his trip, to referring to him as an International agricultural expert. He revealed this “mystery claim” to small holder farmers in rural Masaka, where banana bacterial wilt has devastated most banana fields. Here was a self-declared expert without a tangible solution to a growing catastrophe telling desperate peasant farmers that the transgenic resistant variety that local scientists have developed to help them is no better than animal feed.

Hobblelink, who runs his NGO from Spain, did not acknowledge Spain’s embrace of GMOs. Spain was the first European country to grow genetically modified plants and remains the region’s largest grower, with approximately 20 percent of its maize production, with few consumer or environmental concerns. Spanish corn is used in food production and for animal feed, as in the U.S. and other countries.

Hobbelink and his group, after holding their GMO demonizing briefings, went on to announce an offer of $2.7 million dollars in grants for what he called ‘viable food systems, economic rights of small farmers and their communities and the mitigation of climate change through low input and ecological agriculture’. This offer, he said, is open only to organizations which are ready to demonize GMOs at the grassroots level.

GRAIN, which stands for Genetic Resources Action International, was founded as a coalition of European development agencies in the 1980s with the primary mission of “resisting the corporate Green Revolution.” Today it claims to be “a small international non-profit organisation that works to support small farmers and social movements in their struggles for community-controlled and biodiversity-based food systems.” GRAIN works in Africa, Asia and Latin America with political, peasant and farm union groups opposing GMOs, conventional and “corporate” agriculture while promoting organic and “agroecology” alternatives.

Dating back to 2001, GRAIN has partnered with numerous anti-GMO groups, most notably the Philippines based MASIPAG, which opposes crop biotechnology and efforts to develop vitamin enhanced crops, such as Golden Rice. They have jointly declared their opposition to “so-called ‘Green Revolution'” efforts by the International Rice Research Institute to engage in a “chemical take-over of rice farming” by “replacing farmers’ varieties with seeds that require costly external inputs such as pesticides, synthetic fertilizers… and coercive credit schemes…” The GRAIN and MASIPAG-led coalition claimed, “rice that is genetically engineered to resist herbicides or carry Bt toxins will lead to increased pesticide levels not to mention ecological disruption….” They have called for governments to prohibit all forms of genetic engineering of rice and other foods, even ones that enhance nutrition or fight against crop diseases, and ban all patents on genetic materials.

GRAIN, partnering with AFSA, has also been campaigning against the proposed Biotechnology and Biosafety Bill, claiming the interests of “ordinary farmers” in Uganda are ignored.

“We believe agro-ecological practices such as organic farming, soil conservation and biodiverse gardening are solutions to food insecurity, rural poverty and environmental degradation, not introduction of GMOs,” said AFSA’s Bridget Mugabe. “It (the bill) should be withdrawn and redrafted. We really need a law that will not deprive our farmers of their right to grow food based on agroecology,” Ms Mugambe added.

Related article:  In rejecting GMO shipments, is China more protective of health of its citizens than US?

In Uganda and most parts of Africa, the nature of the crop determines whether it is grown organically or otherwise. Uganda’s major staple crops like bananas and cassava are always grown organically. In some few instances, farmers apply insecticides like carbofuran to fight nematodes. Through genetic engineering, Ugandan scientists at the National Banana Program have developed crops which are resistant to both nematodes and banana weevils, but they remain on the shelf because of opposition by GRAIN and other groups. Farmers would not need to apply significant amounts of inorganic pesticides again if they were approved and grown. The anti GMO activists, who claim to be environmentalists, are blinded to the versatility of genetic engineering, which could actually help them in their goal of no or limited chemical use.

Some farmers who grow crops without pesticides or fertilizers–organic crops–do so because they cannot afford the inputs. Often their yields are disastrously low, destroyed by pests. Yet their goods are sold into a Ugandan market that does not discriminate between organic and conventional products, where yields are much higher.

Uganda ventured into organic cotton production years ago, but farmers were badly hit by the resultant low yields coupled with promises of a premium price, which never materialized. Most farmers abandoned organic cotton for other crops like sunflowers. Recently the Cotton Organization was on the spot because Uganda, once known for cotton production, has started importing cotton for its small textile industry. While the organic movement in developed countries profits, small countries like Uganda, whose markets do not discriminate between organic and non-organic, are rendered forever subsistence by adopting an organic-only model. It could be profitable for a European or American farmer to produce organically because they would get premium prices for their products. But using poor farmers in Africa to under produce and remain poor while the certificate issuing middlemen and their organic masters profiteer is immoral. Adopting genetically modified Bt cotton would dramatically reduce the cost in inputs and result in a sharp cut in pesticide use–and save Uganda from importing cotton.

Cornell University’s global Alliance for Science has been accused by some anti-GMO activists of training GM propagandists.

That’s not what is happening.

In Uganda, the Cornell fellows under their Uganda Alliance for Science umbrella went to the very region where Hobbelink and his group had spread fear. In what seemed like a “battle for the grassroots” farmers, they shared with the locals how genetic engineering has helped confer “protection” on their indigenous crop varieties and how biosafety regulations would help protect rural farmers while encouraging innovation. Some of the information provided by the Uganda Alliance for Science included economic facts on losses due to these main crop diseases. 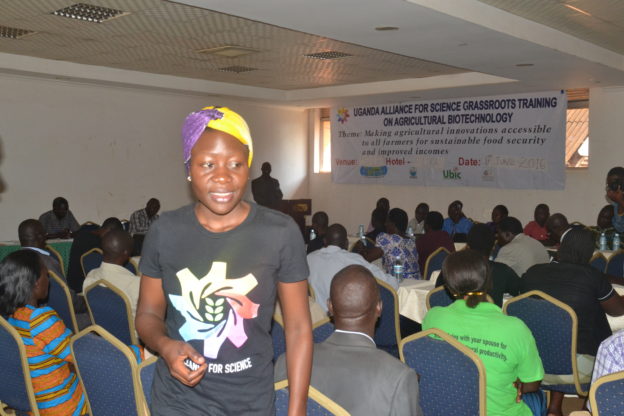 More than 10 million Ugandans consume cassava as their main source of carbohydrates. Cassava brown streak disease causes as much as $24.2 million in damage annually. Another crop under attack is banana consumed by over 13 million Ugadans as their main source of carbohydrates. Bananas contribute up to 22 percent of the country’s agricultural revenue. The estimated yield loss due to banana bacterial wilt is $299.6 million.

The two diseases, banana bacterial wilt and cassava brown streak disease, ravaging Uganda’s farms are a threat to national and region food security as Uganda has been a major supplier of food to neighboring countries, especially South Sudan, which have not had time to develop their agricultural systems due to protracted wars. Conventional methods have not had meaningful success in addressing these challenges. Through genetic engineering, local scientists in collaboration with regional and global counterparts have been able to generate varieties which offer absolute resistance to these diseases.

In this battle for the grassroots where locals are bombarded with divergent information, farmers will have to make their decision based on hypothetical claims of harm made by groups like Friends of the Earth or the very real benefits documented by science groups like the Alliance for Science. They will have to be convinced that genetic engineering will protect their indigenous varieties as the Alliance claims or whether GMOS will “wipe away our sweet tasty natural indigenous forefathers’ varieties” as GRAIN and other anti-GMO groups claim. That choice will determine food availability or lack of it for current and future African populations.