The organic industry sees dairy as a “gateway” product; something families will often begin with before making other organic products part of their regular grocery purchases. Their social media campaigns are often filled with images demonizing conventional dairy, and sometimes even breastfeeding.

But is organic dairy so important to the industry that it has become a leading motivation behind their attacks on biotechnology? Recently released emails, that were requested from Washington State University as part of a Freedom of Information Act request, seem to confirm some of the hidden agenda behind the anti-GMO movement.

In a discussion about nominations to the Non-GMO Project seed committee, organic researcher Charles Benbrook discussed the importance of animal feed. Benbrook spent many hours during his time at Washington State working on the promotion of organic milk. Earlier emails revealed how organic dairy companies Organic Valley and Stonyfield (whose CEO happens to run the Just Label It campaign) worked with him on media outreach.

The Non-GMO project will hopefully move to a policy of verifying seed as GM-’free’ and that certification will suffice for animal feed, among other things, so lot’s at stake.

With organic milk now representing 5 percent of the nation’s milk market, the organic industry seems to be having a bit of a supply problem. Organic dairy cows cannot consume feed containing ingredients derived from genetically engineered crops. With corn and soybeans in the United States being primarily grown from genetically modified seeds, there is no dependable supply. In the recent drought, organic dairy farmers were significantly impacted. Many have closed up shop and even converted to farming almonds instead. Organic dairy farmers in the west have no grass, organic feed is in short supply, and conventional feed is not an option because of the possibility that it contains GMOs. With the production costs of organic milk so high, there is now a severe shortage of it on the market. There is so little non-GMO corn and soy available now that most organic corn and soy are being imported from Canada, China, and India. The modern anti-GMO movement now centers around boosting organic dairy sales.

Plan has been in works for sometime

In 2010, some of the biggest names in the anti-GMO movement came together to develop the 10-year National Organic Action Plan (NOAP). The National Organic Coalition is made up of 15 organizations with a shared interest in spreading organic agriculture throughout the United States. Other stakeholders were brought in to discuss the future of organic agriculture with one goal in mind, “to establish organic as the foundation for food and agricultural production systems across the United States.” Representation from actual organic farmers appears to be missing or severely lacking.

Blogger Amanda, The Farmer’s Daughter, covered this issue a couple of years ago when several of us grew curious about the constant attacks on Starbucks:

Consider the campaign that tried to bully Starbucks into selling only organic milk. The campaign was started by the group GMOInside, but quickly spread to other blogs. Of course, the goal was to stop the sale of “Monsanto Milk” at the chain store. Starbucks is a huge purchaser of milk products, with 20,000 retails stores in 60 different countries. In 2008, the company stopped offering organic milk after switching to conventional milk produced without the use of growth hormones, admitting the requests for organic milk were extremely low.

Organic promoters are not exactly shy about their agenda. Todd Larson of Green America had this to say to the Wall Street Journal:

If Starbucks phases in organic milk over time, and creates a market for it over time, it can move to organic milk without creating price increases for consumers or creating shortages in the organic milk market. In fact, Starbucks’ growing demand would make it easier for more farmers to go organic and lower prices overall over the next few years.

Nowhere in the entire document is there any mention about dangers from GMOs to our health or to the environment. The entire focus is on the perceived threat GMOs pose to organic farmers through the fear of “contamination” and the lack of organic livestock feed. Taxes on synthetic fertilizers, synthetic pesticides, and GMOs, with the proceeds going towards organic incentive programs, are all brought up as a way to encourage farmers and consumers to switch to organic. Prior to the introduction of GMOs, it was easier for corn and soy producers to justify the decision to grow using organic methods. This document essentially admits that the entire anti-GMO movement is built around the lack of non-GMO feed for organic livestock.

“Contamination” fears are at the heart of the matter

Related article:  The Case for GMOs and Sustainability

Why would the organic industry even care so much when their animals can only eat organic feed to begin with? Dag Falck, organic program manager for Nature’s Path, was part of the development of the action plan. In a 2008 article for The Organic & Non-GMO Report, he explains:

GMO-contaminated seeds are not labeled and cannot be identified with the naked eye, nor can viable seed have the GMO contaminated portion recognized and separated out from the non-GMO seeds. At this time the only testing methods available require the grinding (and destroying the germination viability) of the seeds.

Falck goes on to discuss how important the Non-GMO Project is in preventing cross pollination—what the organic industry refers to as contamination—of organic crops. Already in short supply, the industry feels that it cannot afford to risk losing acreage. By encouraging the growth of the Non-GMO market in conventional agriculture, the organic industry feels like they are being protected. Putting the burden of proof on conventional food, with mandatory labeling, essentially creates a free tracing system for organic corporations.

Kellee James provides market data to the organic industry and, in an interview with Bloomberg News, admits to being fearful of the future if domestic farmers continue using genetically engineered crops.

“If imports dried up tomorrow, I think the industry would be in real trouble,” she said. Many organizations with ties to the organic industry seem to have materialized for just this purpose.

GMO Inside (run by Food Babe, Food Democracy Now, and Green America) admits as much when discussing the reasons for their campaign against the yogurt brand Chobani. “By shifting away from GMO feed for their cows, Chobani has the power to shift thousands of acres of farmland to non-GMO farming techniques.” 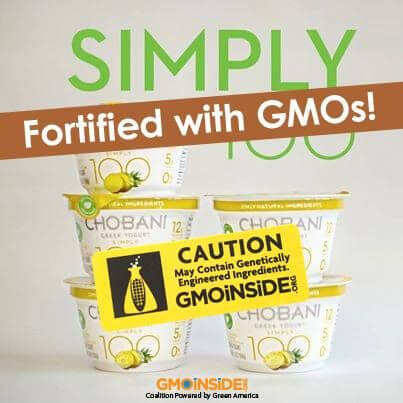 The NOAP called for grassroots movements to get involved in politics. These organizations are expected to direct federal, state and local funding into the organic movement. Grassroots organizations are called on to push school boards to bring in organic food to school cafeterias and “promote the NOAP agenda” (direct quote from the document) at every level of education from kindergarten through college. Grassroots organizations are asked to, “populate the ranks of government agencies that deal with organic agriculture with bureaucrats who understand and are supportive of organic agriculture.” A sentence that, were it written by a major corporation, would have been a front page headline in many major newspapers. Many of the tax exempt organizations like Green America, GMO Free USA and the non-GMO Project have direct ties to organic food producers.

Part of the cost of growing non-GMO and organic crops are incurred because the farmer must keep their crops free from cross pollination from neighboring farms. While this poses little difficulty for most farmers who communicate with their neighbors (some even grow conventional and organic on the same land), the burden is still ultimately on the shoulders of the farmers choosing to grow a specialized crop—in this case organics—and follow the self-imposed rules of that industry. In an attempt to shift that burden, the NOAP sought to “protect organic” farmers by shifting the burden of protecting organic crops on to conventional farmers and biotechnology companies. Only a year later we find the Organic Seed Growers and Trade Association filing suit against Monsanto to do just that: shift the liability on to Monsanto. Isaura Andaluz, a board member of OSGATA, is even one of the names attached to the NOAP along with Mikes Adams of Natural News and John Roulac of Nutiva.

Everything the anti-GMO movement has been doing in recent years appears to have been a coordinated effort to increase the availability of crops to feed organic livestock. Some of the biggest names in the organic movement came together six years ago to create such a plan. This plan is being carried out as a direct attack on conventional farmers and affordable food. The anti-GMO movement is spending millions of dollars on state labeling laws, speakers, and even questionable research, trying to raise doubts about GMOs. Is it just a coincidence that with 20 percent of its milk production (compared to 5 percent nationwide) coming from organic farms that Vermont became the first state to mandate genetic engineering ingredient labels?