On their website, Consumers Union [publisher of Consumer Reports; Read Genetic Literacy Project’s Profile of Consumer Reports] claims to be impartial and unbiased. So why are they actively collaborating with anti-biotechnology groups and the organic industry behind the scenes?

In one email he describes environmentalist Mark Lynas and ex-Greenpeace turned Golden Rice promoter Patrick Moore as “puppets for industry”. He recommends using Belinda Martineau as a counter to them, being a qualified scientist critical of the technology. 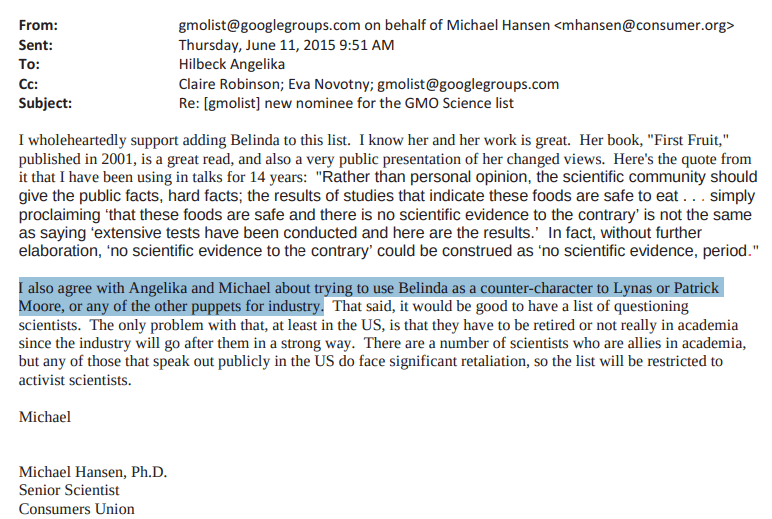 If Hansen had used a private email address, one could allow for him as a private individual to communicate with people sharing his views as he chooses. But here he is seen acting in official capacity for Consumers Union.

Members of the gmolist with industry connections include:

This last name on the list, Charles Benbrook, is perhaps the most controversial of them all. Consumers Union has used him in many reports to promote the organic food industry and instill fear into families about eating fruits and vegetables. Most recently in 2015 he consulted with their staff scientists scientists on an article with many false and misleading claims. The report mentions that “natural” pesticides used in organic farming are generally safer than “synthetic” pesticides used in conventional farming practices, an untrue statement.

Related article:  Many of Non-GMO Project's labels are illegal in Canada 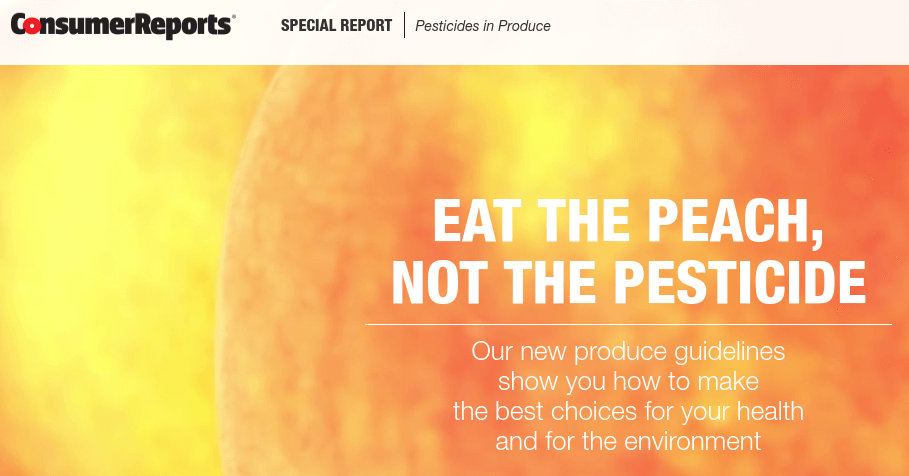 Consumers Union failed to disclose the funding Benbrook has received from industry for his consulting services as well as his research during his time at Washington State University. This is information that Consumers Union should have been aware of with Michael Hansen and Benbrook collaborating together in the gmolist.

Former United States Surgeon General Koop once described Michael Hansen’s fearmongering campaign as “baseless, manipulative and completely irresponsible.” Considering that Consumers Union has always taken a pro-vaccination stance, Hansen is also a danger to public health. Steven Druker, Claire Robinson, and John Fagan on the gmolist are all part of the Maharishi Transcendental Meditation cult which was responsible for a measles outbreak in Iowa (Claire Robinson is the manager of the gmolist).

Consumers Union claims to empower “consumers with the knowledge they need to make better and more informed choices” and claim to be free of “commercial influences”. This may be true on matters such as interest rates and warning about the dangers of cigarettes. When it comes to our food supply their senior staff scientist appears to be deeply influenced by corporations with the goal to spread fear rather than knowledge.

This article originally appeared on We Love GMOs and Vaccines here and was reposted with permission of the author.

Stephan Neidenbach is a middle school teacher in living in Annapolis, MD. He holds a BS in business administration from Salisbury University and a MS in Instructional Technology from University of Maryland University College. He started and runs the Facebook group We Love GMOs and Vaccines, follow him on twitter @welovegv.