“Exposure to glyphosate does not pose a carcinogenic or genotoxic risk to humans.” That’s the conclusion outlined in a report by the Australian Pesticides and Veterinary Medicines Authority (APVMA) which serves as the country’s chemical regulatory agency.

Glyphosate, developed originally by Monsanto under the trade name Roundup, is the world’s most widely used herbicide and is often paired with some genetically modified crops. It’s been used by household gardeners for 40 years.

The APVMA report, released in September 2016, also stated that glyphosate “would not be likely to have an unintended effect that is harmful to animals, plants or things or to the environment.”

The review of the safety data on glyphosate was prompted by the classification of glyphosate by the International Agency for Research on Cancer (IARC), a sub-group of the World Health Organization (WHO), which examined whether the chemical might pose a hazard to humans. It concluded that there is no evidence of any harm to humans who encounter it in food residues but that it is “probably carcinogenic” to agricultural workers:

Limited evidence of carcinogenicity in humans for non-Hodgkin lymphoma. The evidence in humans is from studies of exposures, mostly agricultural, in the USA, Canada, and Sweden published since 2001. In addition, there is convincing evidence that glyphosate also can cause cancer in laboratory animals.

A summary of IARC’s Monograph was published in the prestigious The Lancet Oncology journal and received mainstream pickup on science news sites, such as Scientific American:

But since then, many scientific and regulatory agencies have rejected IARC’s findings, including most recently the Environmental Protection Agency. In a report released in September 2016, the EPA concluded, “based on the weight-of- evidence, glyphosate is classified as “’Not Likely to be Carcinogenic to Humans.'” The  review–considered the most extensive ever under-taken on glyphosate–also found that the chemical is not linked to numerous other disorders claimed by anti-GMO and anti-chemical activists. 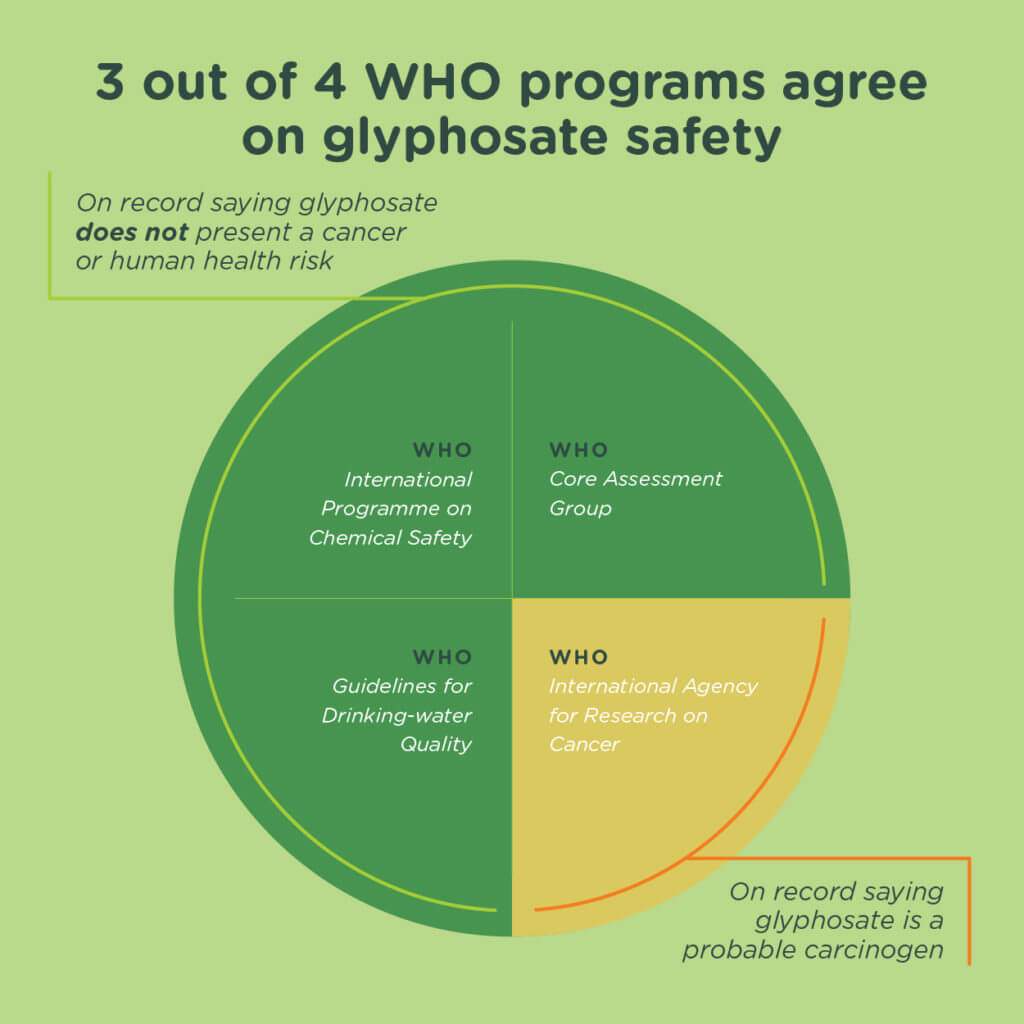 A joint panel of the World Health Organization and the Food and Agriculture Organization of the United Nations issued a review of glyphosate in May 2016 also  concluding glyphosate poses no cancer risks as encountered in food and does not impact our genes. In a 2015 report, Health Canada’s Pest Management Regulatory Agency stated that “products containing glyphosate do not present unacceptable risks to human health or the environment when used according to the proposed label directions.”

In 2014, the Germany’s Federal Institute for Risk Assessment (BfR) concluded in its formal risk assessment that “the available data do not show carcinogenic or mutagenic properties of glyphosate nor that glyphosate is toxic to fertility, reproduction or embryonal/fetal development in laboratory animals.” The mainstream 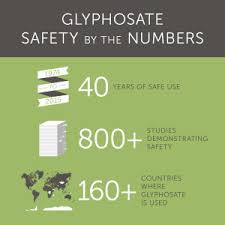 scientific community, including the BfR and the European Food Safety Committee (similar to the US EPA and FDA), has redoubled their criticisms of IARC for using poor methodology, confusing hazard with risk and selectively limiting the studies for evaluation to reach their conclusion.

The key difference between the evaluations’ done by regulators in Germany, the US, Australia, and elsewhere and that of IARC is that these countries evaluated the herbicide for both hazard—whether something could cause harm depending on the dose and exposure—and risk, the likelihood that a substance will actually cause harm. IARC’s Monograph only focused on whether glyphosate might cause cancer in workers exposed to extreme doses over extended periods of times, not whether workers have been harmed; in fact, there is zero evidence that any workers have faced health problems from glyphosate exposure. The report did not claim micro-traces of glyphosate in our food pose a danger—although one would not know that based on the hysteria generated by anti-GMO groups.

As the APVMA explained this in its report:

The role of IARC is to identify things that have the ability to cause cancer—they look at both substances and lifestyles….When making an assessment of the risk of these substances or lifestyles [IARC] do not consider how this risk is managed in actual situations. They did not assess the risk of glyphosate causing cancer when used according to the label instructions in a registered chemical product.

Since the IARC Monograph was released, anti-biotechnology groups have used the
designation to protest the chemical’s use around the world—often erroneously claiming it is the more well-known and prestigious WHO which claims glyphosate is dangerous. Moms Across America (MAAM; Read GLP Profile here) is organizing an online petition (which as of October 12, 2016, has 128,000 signatures) that demands that the EPA revoke the license of the weed-killer because “The World Health Organization has deemed glyphosate a probable carcinogen.”

Related article:  Navigating the agricultural biotech minefield: When an MIT study is not an MIT study 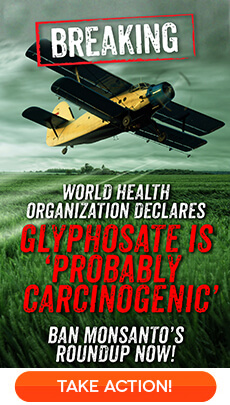 Glyphosate has long been under attack by anti-GMO activists, who see the chemical as a proxy to attack crop biotechnology because of its use with some herbicide-tolerant GMO crops. Even before the IARC report, NGOs had been claiming that the herbicide was harmful to humans and the environment. Safety concerns were raised by an oft-cited, but now-retracted, 2013 study by French geneticist Gilles-Éric Séralini, which featured pictures of rats with bodies twisted by cancer allegedly caused by exposure to glyphosate or GMO corn.

Stephanie Seneff, an MIT computer analyst with no expertise in toxicology, published a data analysis in 2013 that correlated glyphosate use with all sorts of diseases, from depression to Parkinson’s. Seneff and other GMO critics, including Jeffrey Smith, a former yogic instructor who heads the Institute for Responsible Technology, also allege that glyphosate disrupts gut microbes–a problem they relate to what has popularly become known as ‘leaky gut,” a syndrome that affects the intestinal walls and allows pathogenic contents of the intestines including E. coli, salmonella, and botulism to enter the bloodstream. The latest WHO report and analysis by the EPA, European Food Safety Authority, APVMA and other oversight groups dismiss these claims as pseudo-science.

Many public officials scientists are now questioning whether IARC has outlived its usefulness because of its confusing focus on hazard analysis rather than the actual dangers faced by humans in our daily lives—risk. In its 51 years of conducting hazard assessments of chemicals and lifestyles for carcinogenicity, IARC has reviewed almost 1,000 items but has only designated 1 item—caprolactam—as probably not carcinogenic to humans. IARC has designated grapefruit juice, fruits and working the night shift to be as hazardous as glyphosate. Even more dangerous, IARC claims: processed meat, sunlight, oral contraceptives, Chinese-style salted fish, and alcohol.

Conflict of interest charges against IARC have also raised. One of the scientists, Christopher Portier, a statistician and consultant with the US advocacy group the Environmental Defense Fund, was a leading member of the IARC committee–a conflict of interest forbidden under IARC guidelines. Although not a toxicologist, he was the technical adviser for the glyphosate working group. On two important, influential points between 2014-15, IARC did not disclose Portier’s conflict of interest . Since the IARC publication, Portier has been leading a global campaign to ban glyphosate.

IARC’s methods are poorly understood and do not serve the public well, according to Bob Tarone, a statistician formerly with America’s National Cancer Institute and now Biostatistics Director at the International Epidemiology Institute. He said of the way IARC works: “It’s not good for science, it’s not good for regulatory agencies. And for people? Well, they are just being confused.”

Nicholas Staropoli is the associate director of GLP and director of the Epigenetics Literacy Project. He has an M.A. in biology from DePaul University and a B.S. in biomedical sciences from Marist College. Follow him on Twitter @NickfrmBoston.