Hector Valenzuela has long been critical of biotechnology. A proponent of organic agriculture, Valenzuela has been performing research on it at the University of Hawaii since the early 1990s. His criticism has certainly made him some rivals at his university, but academic feuds are definitely nothing new.

Valenzuela, unfortunately, appears to want to take his disagreements outside of the confines of his university. Last year, in an interview for PR Web, he claimed that funding from the biotechnology industry was causing his university to silence him and he called out several fellow professors critical of his own viewpoints.

Professor Valenzuela told the authors of the piece, Paul Koberstein and Eliza Murphy, “I am not an anti-GMO person, and I have never served as a spokesman for any anti-GMO group”. Yet he took part in a protest against GMOs organized by Occupy Monsanto, and even spoke to the crowd. Valenzuela also appears to be actively engaged with Babes Against Biotech, plastering their posters on his office door. 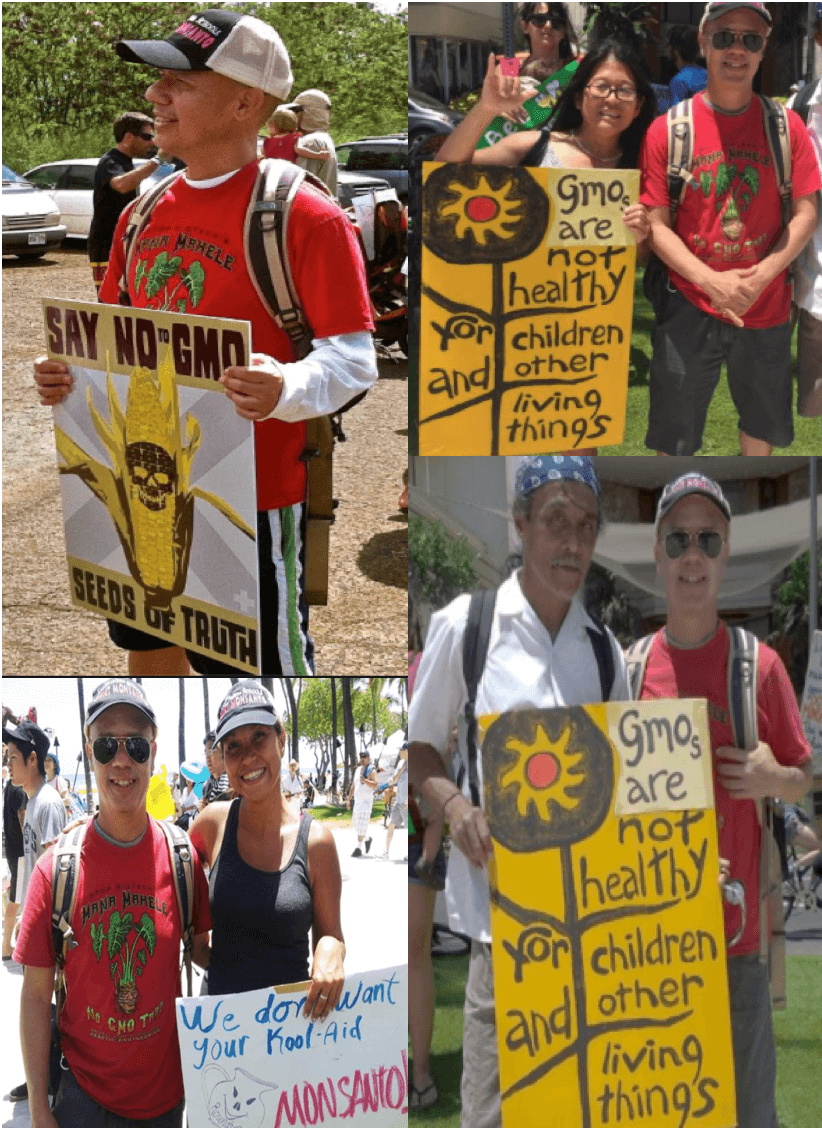 Andrew G. Hashimoto, the dean of the College of Tropical Agriculture told PR Web, “His claims of retaliation are also unfounded as the actions he cited were the result of non-performance. He spends most of his time making presentations about the problems with biotechnology, which he has the academic freedom to do, but not at the expense of his assigned responsibilities.”

If these allegations of harassment were accurate, Valenzuela appears not to have done much about it. I asked Robert Paull, one of the professors Valenzuela claims is harassing him about it. This was what he had to say, “Dr. Valenzuela has repeatedly raised allegations against myself and others at my college claiming harassment. He has been told to file a grievance on numerous occasions with our Union (UHPA) but has never done so in more than 12 years.”  This was important information that the PR Watch authors failed to mention. Paull later clarified that he was aware of one discussion with the union, but no grievance was actually signed.

PR Watch’s Paul Koberstein is sticking with his claim that Valenzuela is not involved with any anti-GMO group:

I don’t know where you get your information about Prof. Valenzuela’s “very clear involvement” with GMOs. As he told me, and I reported, he is raising questions about biotechnology. That is what he is required to do to perform his job as a professor at the University of Hawaii. As far as I know, he is not involved with any group other than as a source of factual information.

Contrary to the title of the piece, which claims Valenzuela is being silenced, the last paragraph admits “They both continue to speak out.”

The University of Hawaii released the second in a series of emails from Valenzuela’s university account, around 1,000 pages worth. The majority of emails were extremely easy to read, except for approximately ten pages that had text shrunken down. Caitlin Russel who scanned the emails for Muckrock.com (a non-profit dedicated to government transparency) took note of it having something to do with Professor Kevin Folta of the University of Florida, Russel explained:

As best as we could figure, the emails had something to do with Kevin Folta, the director of the biotechnology communication program at the University of Florida, and the fallout from the public records reveal that he had received a $25,000 grant from Monsanto. 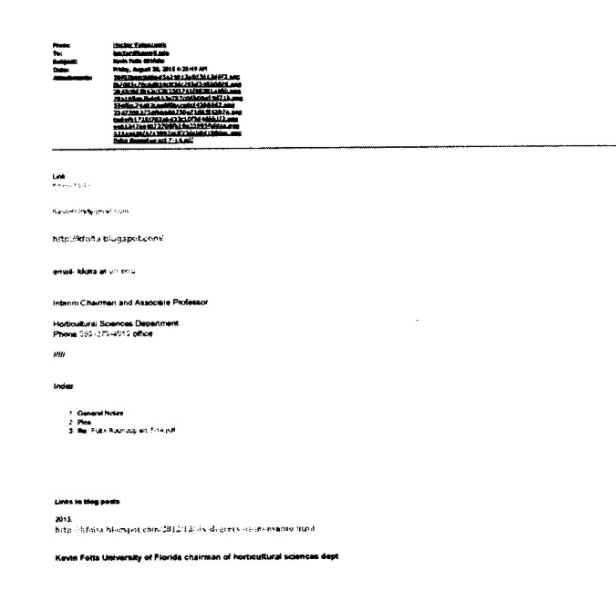 Professor Folta has long been an outspoken proponent of genetically engineered crops, and critics of the technology used his acceptance of the grant to insinuate that his opinion was shaped because of it. When the story broke, Diana Reeves of GMO Free USA sent an email through the listserv GMOList (which Valenzuela is a part of) requesting that people make anonymous complaints to Folta’s university and also requested for ammunition people could use in their complaints.

When the university released a legible copy of the shrunken email, it turned out to be a 32-page dossier on Folta created by Valenzuela. Much of the information was cherry-picked from comments made by Folta on social media and blog posts going back several years. GMO Free USA appears to have used a lot of Valenzuela’s information to create memes encouraging its followers to harass Folta. Quite often notes appear to have been taken verbatim from Valenzuela’s dossier and posted to GMO Free USA without disclosure. I emailed Professor Valenzuela and asked if he could confirm or deny his direct involvement in the creation of these memes, calls to action for Folta’s firing, or an explanation of why the original email released was shrunk down. So far he has failed to respond.

They even went so far as to call on Folta’s university to fire him, because a page unrelated to Folta made a joke about water. 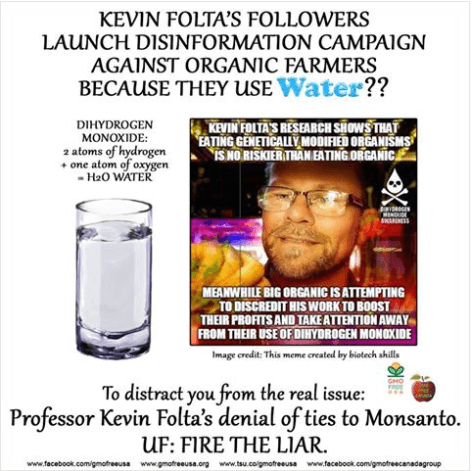 And call the university, they did. According to Fusion.com, “the university was so inundated with requests to fire Folta that it changed his office number and asked the FBI’s Domestic Terrorism Task Force to remain on alert.”

The harassment did not stop at just complaints to his university. The blog Skeptical Raptor described how ruthless some of these people were. In one email that Folta received, the writer described the location of where the Professor’s wife liked to bike, terrorizing her enough to become afraid of staying home alone. They even went to Craigslist:

One of the most vile personal attacks was from some cowardly and anonymous Craigslist poster who invoked Dr. Folta’s deceased mother to attack Folta’s reputation. And used childish and ridiculous language like calling him a “Monsanto whore.”

He can’t take on science in the spirit of acceptable scholarship, so he gets in line with vile activists to defame legitimate scientists. I heard him on the radio on Kauai. I could not believe I was hearing someone claiming to represent a Land Grant University and a science-based perspective. He was pushing claims we know are not supported by evidence.

While free speech unfortunately often protects cyberbullying, that does not necessarily extend to public university professors using university resources. This 32 page dossier created by Valenzuela was sent to his work email from his Evernote account. The technology policy set out by the University of Hawaii prohibits use of email to harass others, it reads:

The same legal and policy standards that define intimidation, harassment or invasion of privacy apply to the electronic environment. For example, persistence in sending unwanted email constitutes harassment and is unacceptable if not illegal….University resources are intended to be used for institutional purposes and may not be used for private gain…The University provides information technology resources at great expense for the purpose of supporting its mission (learning, teaching, research, and public service). It is expected that usage will be primarily educational in nature in support of this mission.”

The first amendment gives rights to public university employees to speak out on matters of public concern. Those rights do not extend to using university resources to do so, nor does it allow those resources to be used in the harassment of people they might disagree with. Professor Folta was harassed and intimidated to the point of fearing for his family and nearly quitting his job. No one should have to suffer that over a disagreement about biotechnology. Especially when federal and state tax dollars are being used to support it.

This article originally appeared on We Love GMOs and Vaccines as University of Hawaii professor assisted in the harassment of a pro-GMO professor and was reposted with permission of the author.

Stephan Neidenbach is a middle school teacher in living in Annapolis, MD. He holds a BS in business administration from Salisbury University and an MS in Instructional Technology from University of Maryland University College. He runs the Facebook group We Love GMOs and Vaccines, follow him on twitter @welovegv.