More than 275 independent science groups have issued statements concluding that GMO crops are as safe or safer than other conventionally grown crops, including organics. That’s forced anti-GMO activists to target herbicides and other chemicals used by conventional farming as a proxy for attacking GMOs.

But the scientific evidence of potential human harm from chemicals currently and commonly used on farms is scant to nonexistent; the levels used are so small as to pose little or no harm, say

government regulators. So the strategy has been to critics to raise what might be called ‘black box’ fears: GMOs and chemicals, they say, may cause epigenetic changes or cause endocrine disruption or the chemicals have not been tested for interactions which could lead to ‘unknown’ health issues. It is the precautionary principle used as ideological sledge hammer.

Both claims are appealing to critics; there is no empirical evidence to support these scare claims, and no evidence can be offered–these ‘theories’ stand outside traditional empirical research: they are not much more than hypotheses, with little empirical science to back them up.

We’ve seen this strategy before. Anti-chemical activists for years targeted a chemical, Bisphenol-A, widely used to help make plastic clear and tough. More than 10 billion pounds are used annually in plastics. But it has a side effect: it can cause reactions in humans that mimic endocrine functions-much like soybeans and many nuts stimulate endocrine functions. Without strong evidence, critics suggested that these very minor changes–far less than occurs with many foods, and the tiniest faction of what occurs with birth control pills–is somehow dangerous to humans.

‘BPA Free’ stickers are now plastered on everything from cans of tomatoes to baby bottles. Over the past decade, Bisphenol-A has been labeled by advocacy groups as an endocrine disruptor, an environmental hazard and a carcinogen. 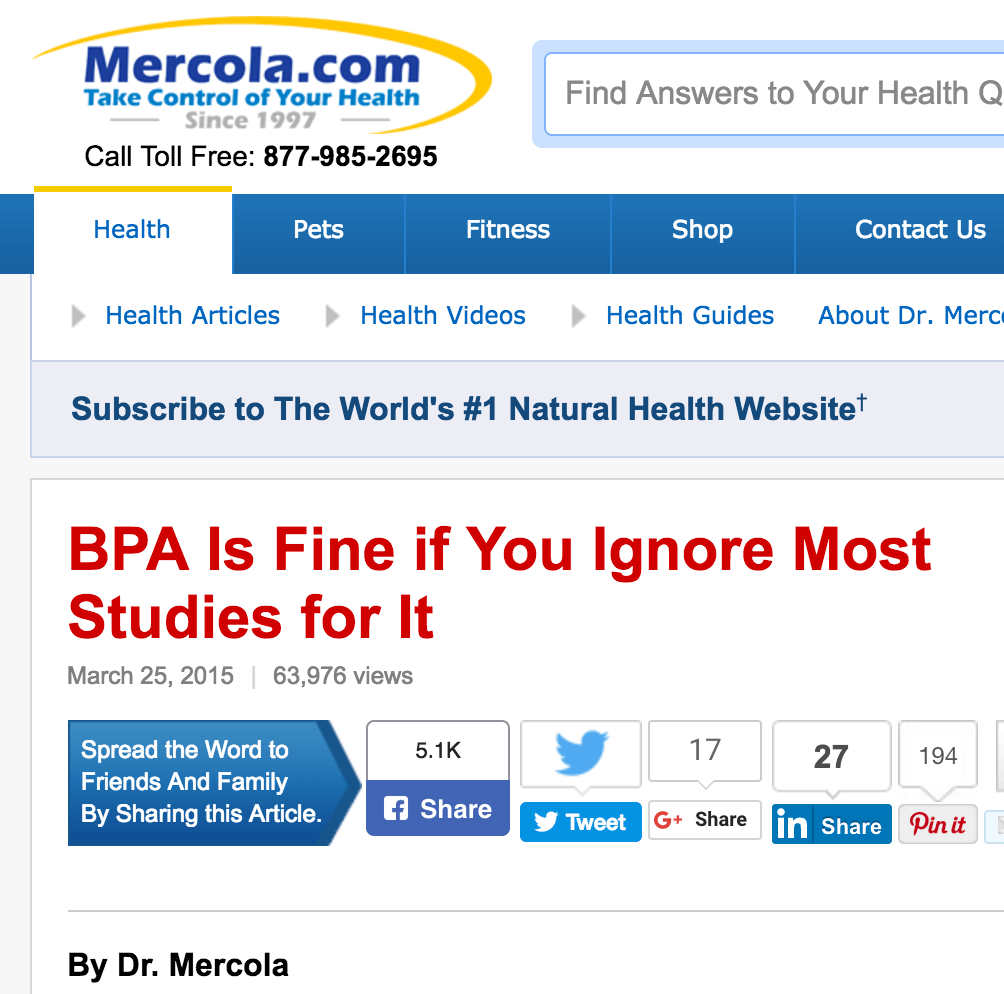 And it’s back in the news again—this time, because of a study that purportedly finds a connection between the chemical and Attention Deficit Hyperactivity Disorder (ADHD) in boys. The Environmental Working Group (EWG), an advocacy environmentalist organization known for its influence on Capitol Hill and its opposition to GMOs and pesticides, reported that the study will:

Add to the growing body of evidence that BPA exposure may be associated with altered brain development and function, potentially leading to inattention and hyperactive behavior in children.

The EWG adds that “While the exact cause of ADHD is unknown, some professionals suggest it is a combination of genes, environmental and other non-genetic factors.” Other EWG reports have not been as careful in assessing BPA. The EWG article ends with ways to avoid BPA and points out the prevalence of the chemical in various products. What it does not point out is that federal government agencies in the US have found no evidence of health risks from BPA. The FDA:

FDA’s current perspective, based on its most recent safety assessment, is that BPA is safe at the current levels occurring in foods. Based on FDA’s ongoing safety review of scientific evidence, the available information continues to support the safety of BPA for the currently approved uses in food containers and packaging.

The European Food Safety Authority (EFSA) concurs with the findings of US agencies:

BPA poses no health risk to consumers of any age group (including unborn children, infants and adolescents) at current exposure levels”

Considering all sources of exposure together, the expert panel concluded: ‘BPA poses no health risk to consumers of any age group’.

BPA is a chemical that is used in the plastics industry, and is found in countless plastic products and used in epoxy liners in cans that prevent spoilage and botulism.

For more than a decade, activist-scientist Frederick vom Saal has been publicly making the case linking BPA exposure to a host of diseases. The studies, as Albert Einstein epidemiologist Geoffrey Kabat has written, were poorly constructed and non persuasive.

The media has often ridden the anti-BPA bandwagon, echoing activist reports that BPA might pose numerous problems, including endocrine disruption, cancer, and obesity. According to Jon Entine, director of the Genetic Literacy Project, in a 2012 article in Forbes,

According to these critics, chemicals like BPA can be blamed for everything from cancer to obesity, retarded neurological development, diabetes, cardiovascular disease, infertility and other disorders related to sexual development.

Why, after such a massive accumulation of evidence do activist NGOs, many reporters and even some scientists continue to reject the emerging, evidence-based scientific consensus? “At this point,” one prominent government scientist told me, “with all the recent studies in hand, calling BPA harmful and dangerous, that’s just mass hysteria.” Clinicians call this apophenia—a neurological condition in which people insist they see meaningful patterns or connections in contradictory or random data.

“There are people who believe in the low dose effect of BPA and will always believe its disruptive effect, regardless of the evidence,” L. Earl Gray Jr., senior scientist at the Environmental Protection Agency’s Research Triangle center in North Carolina, told me. The ‘BPA-is-harmful’ crowd appears impervious to peer reviewed studies,” he added. “That’s a religious position. But as scientists and regulators, we have to go where the data takes us.”

And now, ADHD. A recent study analyzed data from the National Institute of Health’s National Health and Nutrition Examination Survey (NHANES) database, which is an enormous collection of data from decades of research projects. The study, published in Environmental Research, showed a higher prevalence of ADHD among children with urinary BPA concentrations above the median, which was 3.9 μg/L (11.2 percent vs. 2.9 percent). Data extrapolation showed that children with urinary BPA concentrations at or above the median were more than five times more likely to have an ADHD diagnosis than children with levels below the median. These differences were marked in boys more than in girls.

So, BPA causes ADHD, especially in boys? Not so fast.

This was a statistical study, and any scientist can tell you correlation does not equal causation. No mechanism between BPA and ADHD is known, and even the causes of ADHD are not at all clear. The NHANES data is no doubt valuable, but as Daniel Wartenburg and Gail Buckler, environmental scientists at Robert Wood Johnson Medical School in New Jersey, have pointed out:

The issue that is more controversial is the utility of these data to address an existing public health concern, including investigation of etiology, instead of undertaking a study that includes original data collection. One problem with using extant data is that, although a research question may have broad societal implications, the results may be relevant only to the population under study. There is a series of questions that one should consider when making a decision about the utility of the results and their relevance for generalization.

Other statistical studies have found a wide array of potential links with BPA, many of which are contradictory:

Another issue besides the links that can be created by statistical studies (without knowing pathogenic mechanisms) can arise from investigator bias. This recent study was conducted by activist-scientist, Bruce Lanphear, who has been a vocal critic of BPA. Lanphear has been accused of over-stridency in advocating stronger regulations against lead and BPA use. His view:

There’s a school of thought that our job as epidemiologists is simply to report results in journals while others translate those findings to the public—I don’t subscribe to that. I view my job as also helping to translate findings in ways that don’t mislead the public but that also help people understand why something is important.

As of now. the extraordinary evidence to indict BPA isn’t there. So far, the US Food and Drug Administration (FDA) says it does not anticipate issuing any restrictions of BPA levels in food. The Environmental Protection Agency (EPA) is reviewing data, and while concerned about potential low-dose effects on the environment, is still in the fact gathering stage.

Another reason why bisphenol A research has been bogged down is the thorny issue of “low-dose” effects and inverted U-shaped dose-response curves (also termed “hormesis”). These claim to show that effects of bisphenol A occur at both very low and much higher concentrations and may disappear or diminish at intermediate concentrations. Studies used an even wider range of doses (ranging from 0.05 to 50 μg/kg/day) for the control estrogen EE and found no significant evidence for a U-shaped dose-response curve but found significant adverse effects at doses of 5–50 μg/kg/day.