Honeybees are not in crisis, but what about beekeepers?

Scientists are now in agreement that we are not facing a beepocalypse as many in the media have been maintaining. Bee populations aren’t declining; they’re rising. According to statistics kept by the U.S. Department of Agriculture and the Food and Agriculture Organization of the United Nations, honeybee populations in the United States, Canada and Europe have been stable or growing for the two decades

As the Washington Post reported in two separate features in 2015–‘Call Off the Bee-pocalypse: U.S. Honeybee Colonies Hit a 20-Year High’ and ‘Believe It of Not, the Bees Are Doing Just Fine’–advocacy group claims amplified in the media are just plan wrong. Here are a few charts that illustrate the trends that overlap the introduction and use of neonics, the central target of anti-chemical environmental groups. 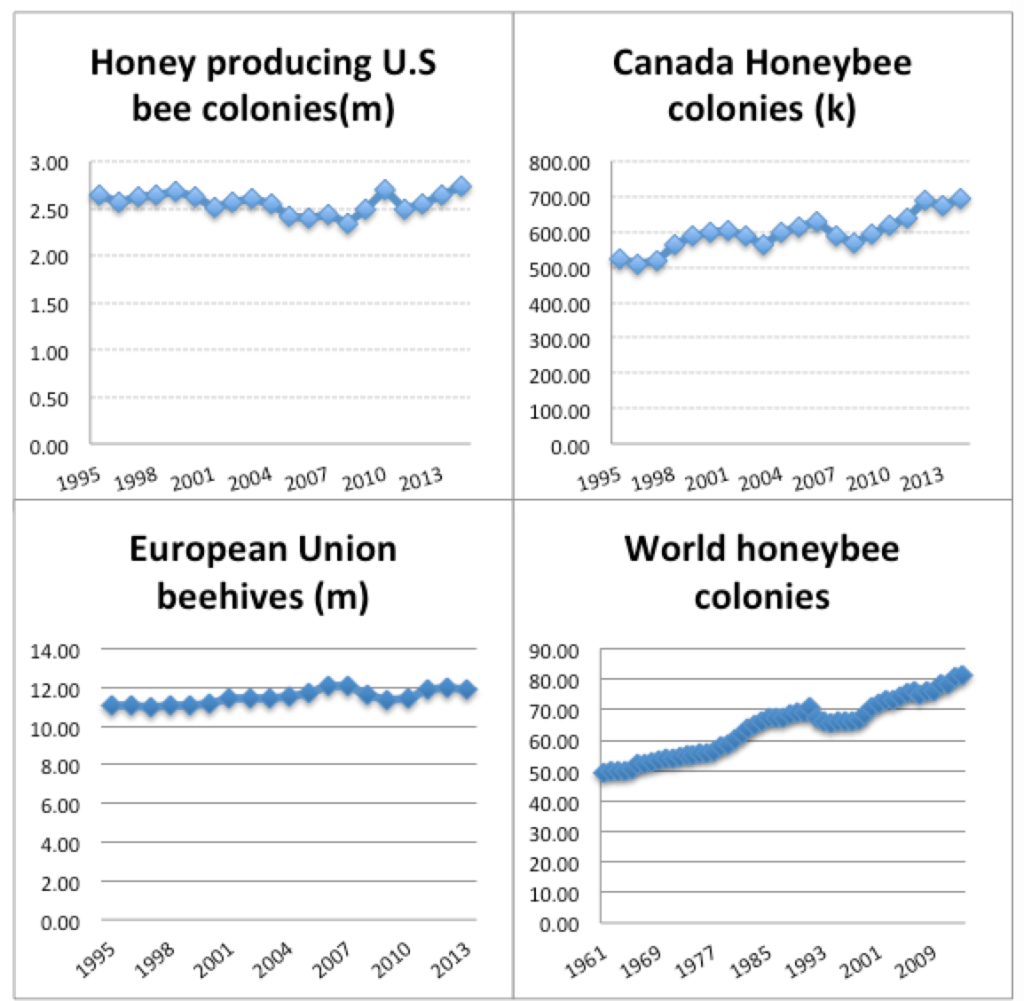 But the latest statistics have not stemmed the tide of dire warnings. Some of the focus has shifted from the pollinators themselves to beekeepers. Tim Tucker, president of the American Beekeeping Federation has said: “It’s not the bees that are in jeopardy. …. I believe we’ll always have bees. … [But] unless things change, what’s in jeopardy is the commercial beekeeping industry.”

“Beekeepers are indeed “working nearly twice as hard as ever,” as Tucker has said. Beekeepers report having to split their hives more often to make up for losses, entailing more work than in previous decades.  And for commercial beekeepers maintaining thousands of bee hives, all of this additional work means more employees, more salaries, and more expenses.

The major driver of these challenges is the near-global spread of parasites like the varroa mite and the dozens of other diseases that beset commercial honey bees, which require a great deal more work and expense for both commercial and hobbyist beekeepers. Varroa mite counts must be carefully monitored, and mite control preparations applied at precisely the right times.  Otherwise, mite infestations can get ahead of beekeepers, propagate and devastate the hives.

But the hard work and increased challenges of beekeeping today don’t necessarily translate into economic calamity — especially for the more sophisticated beekeepers who have modernized their operations and kept abreast of changing conditions.

As beekeeper and independent researcher Randy Oliver, who runs the well regarded Scientific Beekeeping blog, points out, “In beekeeping today, many progressive beekeepers are finding beekeeping to be more profitable than ever.”

The U.S. Department of Agriculture’s economic statistics bear this out.  Demand for honey has almost doubled over the past quarter century to 468.3 million pounds by 2013. Per capita honey consumption in the U.S. is up nearly 50 percent over the same period.

When demand is high, prices go up. The retail price of honey has risen more than 50 percent in the last decade, (about the same as beeswax), with total revenue from honey production reaching $2.835 billion in 2012.

Related article:  Florida oranges may need rethink on use of GMOs, neonicotinoids to survive 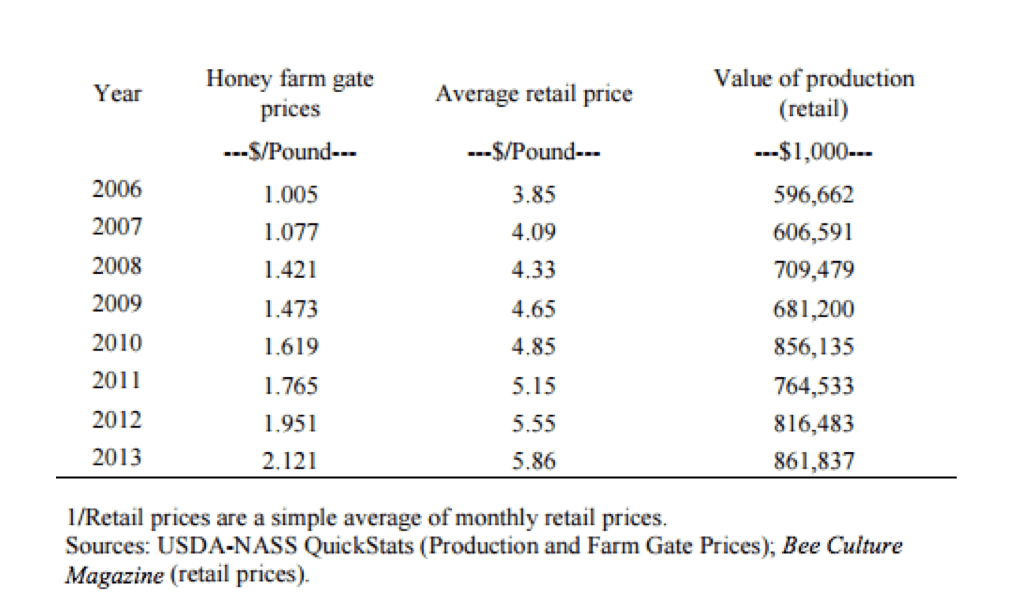 Commercial beekeepers have also prospered from a parallel boom in the market for almonds, which is critically dependent on bees for pollination. In fact, as much as 75 percent of all U.S. commercial beehives are committed to almond growing, the bees trucked into California in the first quarter of each year to pollinate the to 870,000 acres of almond groves (which have more than doubled in size since the mid-1980s).

With rising pollination services demand, hive rental fees for almond pollination have risen to record levels, with prices up a staggering 428% (or about $150 extra per colony) since the 1990s.

Together with other pollinated crops, including sunflowers, canola, grapes, apples, cherries, watermelons, and blueberries, total revenue for pollination services added up to $655.6 million in 2012, the most recently available data.

While the cross-continent pollination treks made by beekeepers are highly profitable, the huge stresses imposed on the bees themselves helps explain the less than optimum health of many commercial bee colonies. 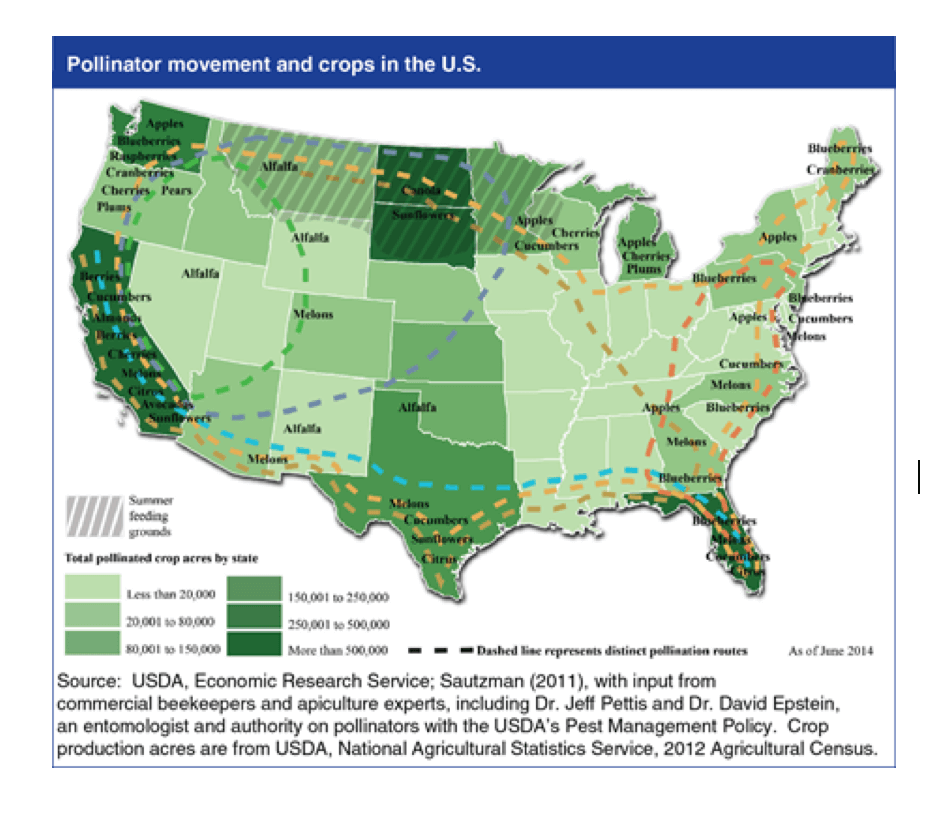 One result is that despite the fact that we now have more bee colonies than we have had in 20 years, the volume of U.S. honey production and the per-colony honey yield — as opposed to the price per pound of honey — has been on a general decline. United States honey production in 2013 is about 35 percent lower than in 1989.

While a number of factors contribute to this trend, USDA notes, “With proportionally more colonies being sent to pollinate almond orchards—as opposed to crops that are more valuable for honey production — a lower average volume of useable honey per colony can be expected.”

The downward trend in U.S. honey production means that U.S. beekeepers now satisfy less than 1/3 of total U.S. honey demand. The difference is made up from imports from other nations – chiefly Argentina, Vietnam, India, Brazil, Canada, Uruguay, Mexico, Ukraine, Turkey and Taiwan.

Despite all this foreign competition, however, high U.S. demand has continued to exert upward pressure on U.S. honey prices, which have more than doubled to $2.12 per pound since the Colony Collapse Disorder crisis of 2006-7.

All this is economics, not catastrophe. Consumers may not like the higher prices for honey, but higher prices are certainly sweet news for beekeepers. As beekeeper and researcher Randy Oliver has commented,  “the market for honey is offering opportunity for those not involved in pollination.  And the market for bee sales is ravenous.”

Oliver sums up the beekeeping’s economic outlook this way: “The free market has solved the problem of beekeeping being more difficult and costly these days by better compensating beekeepers. The law of supply and demand is working just fine.”