Josiah Zayner has made glow in the dark boo with a do-it-yourself DNA kit that his startup, the Odin, has just started selling online. The company conceived it as a gimmick to introduce homebrewers to genetic engineering. But in the short time the kit’s been for sale, it’s also become a test for the citizen scientists to see how far they can push the FDA.

With the kit, customers can genetically engineer yeast to make mead that gleams like a lantern … 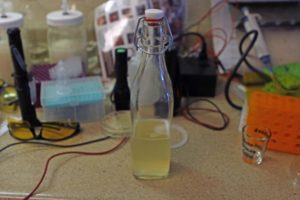 By initially marketing the kit as a food-making device, the startup may have exposed a loophole in laws that haven’t caught up to a generation of biohackers tinkering with the DNA of bacteria, plants, and animals in their kitchens and garages.

…After BuzzFeed News asked Zayner about the product’s legal status, he contacted the FDA, and learned the agency had been waiting for his call.

Three FDA staffers told Zayner that the green fluorescence protein was likely a color additive for food, and it hadn’t been recognized as safe to consume…. Zayner argued that the kits were being sold in part as an educational tool; the FDA disagreed.

The GLP aggregated and excerpted this blog/article to reflect the diversity of news, opinion and analysis. Read full, original post: DNA Biohackers Are Giving The FDA A Headache With Glow-In-The-Dark Booze