The original wave of mad cow disease infected only a limited number of people with a very specific genetic signature. Can we prevent these mystery brain infections from reoccurring? The answer may be in our prions.

Also known as bovine spongiform encephalopathy (BSE), mad cow causes a spongy degeneration of the brain and spinal cord in cattle. Humans infected with BSE can develop a neurodegenerative disease known as vCJD.

The disease first came to the public’s attention in Britain in the mid-1990s, killing an estimated 80 young Britons before it was contained. But the hysteria crossed the Channel into Europe and even made its way to the United States. All told, 223 people were diagnosed with vCJD worldwide, including 177 in the UK. The disease only struck people with a certain genetic makeup.

The number of cases has faded over time, but now a new wave may be forming. According to a study in the New England Journal of Medicine, one year ago, a 36-year-old man in the UK died after showing aggressive personality changes, memory loss and problems walking over two years. The symptoms and brain scans were typical of ordinary CJD, a rare disease of the elderly not linked to BSE. But because he was so young, his prions were double-checked after he died. It turned out he had vCJD, the kind caused by BSE.

The prion is a natural protein found in mammals. Its specific role is largely unclear—until it goes bad. That’s when it can cause devastating brain diseases, like mad cow or Creutzfled-Jakob disease in humans. The disorders are generally revealed post-mortem, but are marked by memory loss, anxiety, depression and dementia. There are no cures. 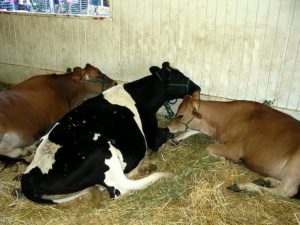 According to the New England Journal study, exposure to the BSE prion was at a high level in the UK until 1989, when some of the meat most likely to contain it was taken out of the food chain. So far, no vCJD patients were born after 1989.

Fortunately, it seems these prions only develop into disease in an unlucky few. Even if only 1 in 2000 people carry the prion, 6000 cases of vCJD should have developed in people making only the M protein by now. Unlocking the mystery of the prions could go a long way to helping us develop cures for these unusual disorders.

Prion-based disease was first observed in the 1950s in New Guinea, where some members of the cannibalistic Fore tribe developed a nervous system disorder called Kuru (or shivering.) Since that discovery, prions have been found in mammals, yeast and, more recently, bacteria. With prion-based diseases resurfacing in the UK, this is a good time to revisit the strange molecules, their effects, and now their expanding presence in new biological kingdoms.

The disease displayed by the New Guinea cannibals was characterized by profound dementia and loss of limb control – prompting them to call it “the laughing disease.” They contracted it through a burial rite in which members of the tribe ate the brains of their dead.

What made the disease so notable was that it wasn’t caused by typical bacterial, fungal or viral pathogens; the disease was tied to an unusual infectious agent – the tiny prion. Smaller than viruses, they are not living creatures. They have no metabolism, no DNA. Instead, they are simply resident proteins that misfold, and upon misfolding, influence other like proteins to do the same. They act kind of like biochemical dominoes.

Like all proteins, prions are composed of amino acids, molecules that define a specific shape of the protein as it folds. But a protein’s structure is sometimes influenced by its neighbors. That’s where the one bad apple can spoil the whole bunch.

Prions are found naturally in the central nervous system though their exact function is unknown. But when they start going bad, the nervous system becomes compromised.

These influential proteins were thought to be found only in animals until they were identified in yeast in the 1990’s. Next, they were found in plants. And, most recently,  in bacteria.

Scientists identified the latest prion through examination of bacterial genome sequences. They used modeling methods to predict that a protein in the bacterium Clostridium botulinum could take on the prion-like ability of influencing other proteins. The specific protein’s main role is in gene expression, meaning it controls how genetic material is turned on and off.

This finding is important because it shows that these unusual influential proteins may predate the split between nucleated cells and bacteria. More importantly, it suggests these misbehaving molecules may be widespread in biology, and could contribute to important roles in bacterial physiology.

This also brings a question to mind: Are these bacterial prions capable of influencing other species’ prions, driving them to their pathogenic form?  Examination of cross-reactivity between un-related prions would suggest otherwise, as there is no evidence that yeast prions, for instance, can affect human ones. However, it is an intriguing hypothesis that certainly will be tested.

Now that this first example of a bacterial prion has been identified, others are almost certain to be found. These findings add new texture to how we think about genes, proteins, and possibly the cause of disease.

A better understanding of these odd pathogenic proteins could also lead to new therapies and solutions to fight the progression of prion-related diseases, including what may be a new outbreak of ‘mad cow disease’ in humans.

Roxanne Porozinski is business owner, focusing on the beauty and medical industries.  She is an advocate of lifelong education, currently adding nursing to her resume and toolbox.