Julius Caesar’s crossing the Rubicon River into Italy in 49 BCE has been a metaphor for entering a situation that cannot be reversed. In some ways, that’s where we find ourselves now as researchers consider new applications for the revolutionary gene editing technique CRISPR.

Gene drives can be used to introduce new traits into an insect population that are passed on to nearly 100 percent of offspring. This system uses genetically modified male mosquitos to deliver new genes along with a mechanism for copying the new sequences from one member of a chromosome pair to the other. In other words, a baby mosquito has a gene that came only from its father, yet has it as both a paternal and maternal copy. Thus, even a recessive gene will manifest its trait in all offspring. Furthermore, the offspring will spread the gene and trait to their own offspring. Since mosquitoes have a short life cycle, this means in the span of a summer, we could alter almost the entire population of a particular mosquito species in say the Brazilian rain forest, possibly wiping out a disease.

Why would anyone be against this? Most concerns revolve around the fear that that something could go wrong, leading to unexpected consequences. The spread of some other disease could be unexpectedly facilitated. Or the local ecology could be harmed by the elimination of a link in the food chain. It’s also plausible that something could happen akin to the introduction of rabbits in 19th century Australia, where the population exploded, due to lack of predators, with major consequences for the ecosystem.

Certainly, there’s also an element of fear and distrust of technology. But there are ways to confront rational and irrational objections alike. For the former, development and demonstration of safety measures can go a long way. For the latter, demonstrating safety measures can help a little, but a more effective tactic is to educate the public, providing a perspective on the problem that the technology is being proposed to address — for instance, hundreds of thousands of people die each year from malaria. 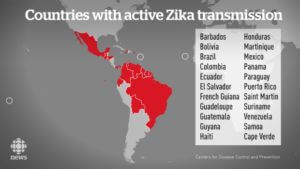 There’s been a lot of attention given to the Zika virus in recent months, making it the most notorious disease that’s delivered to humans by mosquitoes. Specifically, the virus is carried by the mosquito species Aedes aegypti, which also carries dengue fever and chikungunya in tropical areas. A different category of mosquito is Anopheles gambiae (actually a complex of several species), which carries the parasite that causes malaria. Keep the species differences in mind. When we talk about a gene drive to confront Zika, the same drive would work against dengue and chikungunya. A different system would be needed for malaria, namely to alter Anopheles,

For perspective, consider that roughly 429,000 people died of malaria in 2015, mostly in sub-Saharan Africa, and that number was down from earlier years, due to mosquito control measures. Clearly, controlling mosquitoes prevents disease spread. To this end, a type of GM male mosquito from the Oxitec corporation has been tested against Aedes with reductions in mosquito populations, but this was not a gene drive. Instead, the mosquitoes were altered to produce offspring that would not reach maturity. This is really only a short-term solution, as populations can recover over time.

But scientists in England, Boston, and San Diego have created CRISPR-altered gene drive mosquitoes. They have gone through testing and could alter populations in the wild, if released.

The gene drive mosquitoes used in research have a built-in safety measure — kind of an auto-destruct that destroys them if they escape into the wild. In a certain way, we could actually consider them safer than the Oxitec mosquitoes, because the latter were designed to reduce the population. In contrast, rather than delivering a death gene, or an infertility gene, the approach with gene drive mosquitoes is to make them resist the virus or parasite that causes a disease in humans. With Anopheles mosquitoes, this means genetic alteration to create an antibody that neutralizes the malaria parasite, so there should be no reduction of the number of mosquitoes in the geographic region where the males are released. By the way, only the females bite, so introducing tens of thousands of males does not increase the number of humans bitten. Since population size would not be affected, there should not be an issue of altering ecology by decreasing the amount of prey available to bats, for instance. There would be the usual number of mosquitoes. And people would still be bitten. They just wouldn’t get malaria — or other targeted diseases. 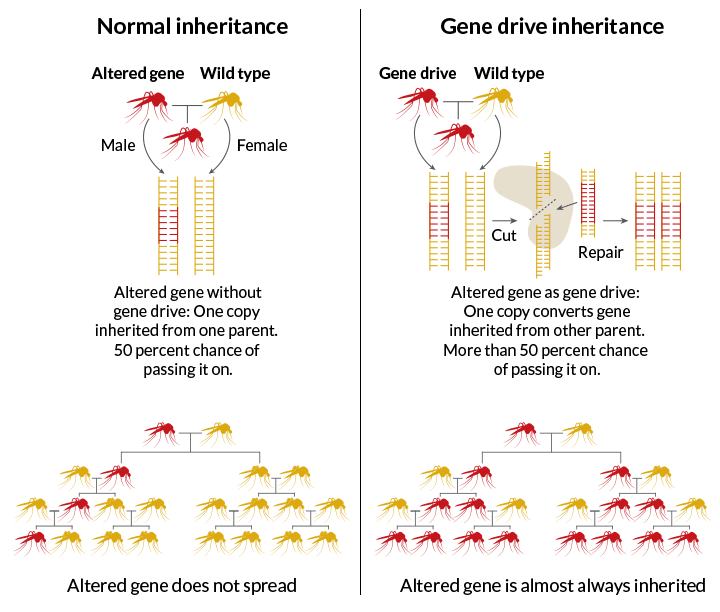 What if you crossed the Rubicon, but there was actually a way to go back? This has been a big topic in gene drive research, not only because of the unlikely scenario in which it creates an unanticipated effect but also because of politics. Suppose for instance that you release your male mosquitoes in country A, which has a high incidence of malaria and is open-minded on biotechnology. Your gene drive is working and spreading through the jungle, but now it’s approaching the border of country B — which is controlled by anti-technology political forces.  In such a case, researchers could send out another CRISPR gene drive. This one would recognize the same genetic sequences where the anti-malaria gene was spliced into the mosquito genome, but it wouldn’t contain that anti-malaria gene. As a result, it would simply cut out that inserted gene, thereby erasing the previous gene drive as it spread through the population. It could be released at the appropriate geographic locations to keep mosquitoes around the border pro-malaria.

When hear the term anti-CRISPR, it’s natural to envision human opponents of the technology. That’s certainly a real thing, but nature has also created a literal anti-CRISPR system. That’s because CRISPR evolved in single celled organisms to protect them against viruses. Evolution is an ongoing arms race between species, so as soon as there was CRISPR, natural selection favored the emergence of viruses that could resist CRISPR. So new research has focused on utilizing and developing the natural systems against CRISPR components as an additional safeguard.

By moving forward responsibly and developing all possible reversal tactics, perhaps biotechnologists can help put concerns at ease. In such a case, taking a bold move against insect-borne disease may not require that we burn any bridges at all.