David Warmflash | May 5, 2017
This article or excerpt is included in the GLP’s daily curated selection of ideologically diverse news, opinion and analysis of biotechnology innovation.

The late astronomer and champion science communicator Carl Sagan once proposed a very simple experiment to test the claims of religious people and new age types who claim memories of ‘floating’ outside of their bodies during a near death experience. His experiment: Simply place a book that is obscure or unknown to the person atop a book shelf. If he or she claims the ability to experience what’s called “astral projection”, ask the person some very specific things from the book jacket. If the person can’t produce the correct answer then, well, the memory of floating was not real. More than likely it was a bizarre sensation produced by the semi-conscious mind, probably after the person was revived.

Not too long ago, neuroscientists could only guess at the causes of such “out-of-body” experiences. But today, technology is helping researchers see that such ‘experiences’ are really ‘all in the brain’ and nothing else. At the same time, improved understanding of the physical basis of our spatial perception may go a long way in helping us to understand the variety of maladies that can shape our brains and behavior, including understanding schizophrenia. It might even shed light on the origins of organized religion.

What is the latest mind monitoring innovation? Using a brain scanning technology known as functional magnetic resonance imaging (fMRI), Swedish researches have been able to produce a Star Trek transporter effect within the minds of volunteers (reports in various media have employed the term “teleporting” when talking about the Star Trek device, but the Star Trek series never used that term; it was always the “transporter”).

To be sure, nobody has actually beamed anyone anywhere. Rather, lying in an MRI chamber, subjects were made to feel as if they were beamed around a room. By linking the volunteers with virtual reality to a dummy with cameras and sensors on different body parts and brushing over cameras and sensors, and by moving the dummy around, the researchers were able to observe how activity in specific parts of the brain caused a person to feel as if he or she is in one place or another.

“If we can figure out how the brain constructs the sense of body in space, it will give us clues as to what goes on in disorders such as schizophrenia,” said neuroscientist Arvid Guterstam, of the Karolinska Institute in Stockholm, where the experiment was conducted.

That’s because schizophrenia includes disturbances of self-perception, not necessarily in the spatial sense, but spatial misperceptions can be a part of it. Furthermore, a much more rare condition, called asomatognosia, is characterized by a lack of awareness of a certain body part. Generally, asomatognosia develops as a result of brain damage, and loss of awareness of particular body parts corresponds to damage in particular brain regions. 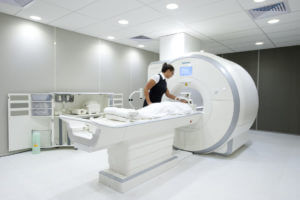 By repeating the experiment with the dummy body in different parts of the room the researchers could produce different body location illusions; sometimes, a subject felt as if he/she was located in one part of the room and sometimes as if in another part. Using fMRI scanning, they looked at activity of specific brain areas during illusions and without illusions, in search of a brain area that controls both an individual’s sense of self-location and one’s sense of ownership (the feeling of being inside one’s own body). The experiments revealed that there is such a brain part that controls both of these sensations: the posterior cingulate cortex (PCC), located in the lower part of the brain’s parietal lobes.

Related article:  Are our views on religion, astrology and new-age beliefs hardwired?

“It’s a very mysterious area [of the brain],” Guterstam noted of the PCC. Most of what’s known about the function of different brain parts comes from observations of the effects of strokes. People suffering strokes in an area of the frontal lobe called Broca’s area, for instance, have trouble expressing themselves, despite knowing what they want to say. For this reason, neurologists have known for a long time that Broca’s area is vital to expression. But since the PCC is not very prone to strokes, neuroscientists have been uncertain as to its function.

On the other hand, moving out from its posterior end, the cingulate cortex in general has known connections with memory and learning, but also with psychiatric conditions, particularly schizophrenia and depression. This, in turn, makes its newly discovered connection with body location and body ownership all the more interesting. In the study, the misperceptions are called illusions, because the researches can create them and remove them at will. In a diseased state, however, we would call the effects hallucinations. In schizophrenia, the most notorious hallucinations are auditory–the patients hears voices–but in psychiatry hallucinations can also be visual and involve all of the other senses.

Various metaphysical ideas promoted by religious “prophets” and founders of the world’s religions, and also by people revived from clinical death, have involved out of body experiences and feelings of floating. This makes it all the more interesting that the Swedish experiment revealed that a feeling of floating, and of being transported instantaneously from one location to another, involves the parietal lobe, along with another brain area called the premotor cortex (in the frontal lobe). If one considers all that could be turning on and off in the brain as one moves between consciousness of normal life, unconsciousness of sleep, unconsciousness of near death, and the various states of semi-consciouness connecting these other states, it seems reasonable that a floating out-of-body experience, including the commonly reported “astral projection”, should have a physical basis in the brain.

Given the progress of fMRI and other brain experimentation technologies, it also seems reasonable that science could be on the brink of demonstrating precisely why people have such experiences. In the meantime, it’s probably not a bad idea to follow Sagan’s advice and put a few obscure book titles on high shelves in hospitals and other places.