Epigenetics Around the Web: Marie Claire’s missteps on probiotics and microbiome; Dad’s role in fetal health

Nicholas Staropoli | May 8, 2017
This article or excerpt is included in the GLP’s daily curated selection of ideologically diverse news, opinion and analysis of biotechnology innovation.

This week’s features: Marie Claire’s missteps on science, journalism and advertising; overhyping the relationship between health dad’s and healthy children. Plus, see what’s trending on the Epigenetics Literacy Project.

Like Febreze for your body, Mother Dirt’s AO + Mist is a live probiotic spray that restores essential bacteria to our microbiomes.

For example, if you were to use this formula on your face, the “good” bacteria in the mist would consume the ammonia (which raises pH) and restore balance to the skin i.e. it would become less sensitive, dry, or oily. And it’s not just your face and body that can benefit from a reset spritz. You can use it in your hair too.

How does this product actually work? Does it really help your bacteria? Millions of women turn to articles in popular women’s magazines for advice on health and beauty products. They deserve credible analysis to help them make a decision if this $50 product is worth buying. 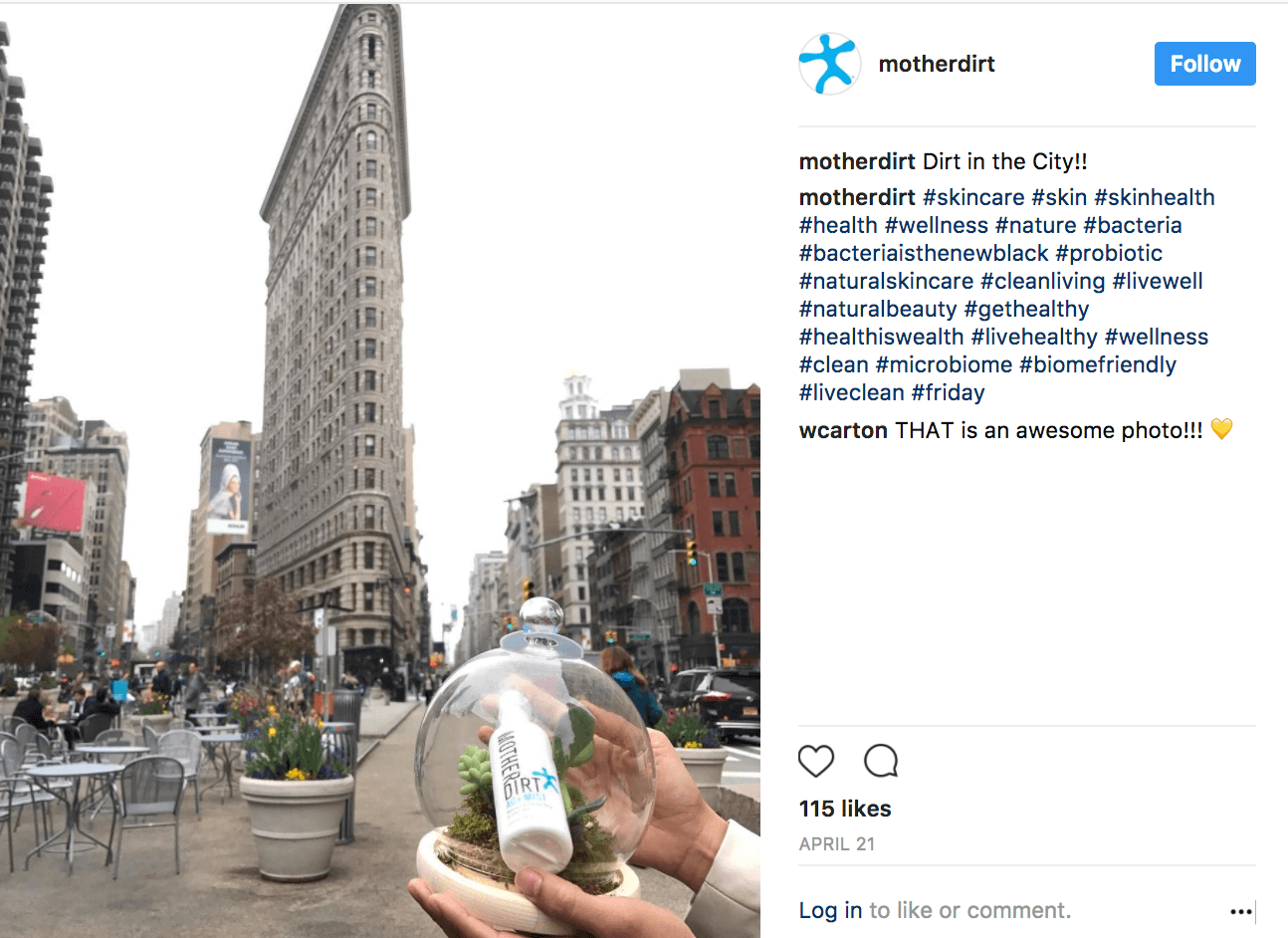 For answers, writer Roxanne Adamiyatt turned to the company’s president, Jasmina Aganovic, for an analysis of the product: “People think humans are meant to be smelly, but body odor is in fact an indicator of an imbalance perpetuated by the products we use.” Not the most helpful or accurate comment. Neither Adamiyatt nor Aganovic offer any studies or evidence to back up this controversial claim.

The reality is that there isn’t any science to back up any of their claims. Jonathan A. Eisen, a professor at University of California, Davis, wrote on his blog:

I mean. It is a nice story. But what is the evidence for this? None as far as I can tell. I searched Google Scholar for papers by Aganovic on acne or aboriginal communities and found nothing.

These claims are not grounded in good science, at least not yet. The microbiome has provided some interesting ideas about the connection between humans and their resident bacteria–but no smoking guns. Much of the evidence is based on epidemiological findings and work with rodents. Even major microbiome researchers agree the field relies too much on correlation.

So why did Marie Claire publish this review without actually analyzing the product?

This story reads more like an advertisement disguised as an article…and publications do this a lot. It’s called native advertising. It can be really dangerous because the reader can’t distinguish between legitimate analysis and paid content. 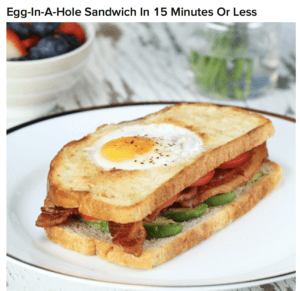 You may have seen this BuzzFeed article trending on your social media feed recently: “Egg-In-A-Hole Sandwich In 15 Minutes Or Less.” That slogan sound familiar? It’s because the article is paid for by the insurance company Geico. But BuzzFeed tells you this right up front before the story even starts.

Marie Claire doesn’t mention a financial relationship at all in the Mother Dirt story. So either the writer made no effort to evaluate the science of this product or the company is actively hiding a conflict of interest. Either way, it’s not good.

I know some people may say that this is not a science magazine so they shouldn’t be held to a high standard of fact-based reporting. But people around the world both trust these types of sources and are confused about the science. This article presents a scientifically controversial idea as fact. If you’re going to write and publish, you have an obligation to readers to get the basic facts right and present them without prejudice.

Overhyping the relationship between healthy dads and healthy children

Conception has long been seen as the responsibility of females. The fetus develops in mom after all and once it’s born, the baby’s food is made in her breasts. And history is littered with examples of women scorned for not bearing their man a child–or in some cases for not bearing a male.

But epigenetics has changed a lot of how we see nature’s responsibilities divvied up. We know now that both partners contribute to infertility and there’s even an epigenetics-based fertility test for men (read my review of it here.) Several studies over the past decade have found relationships between a father’s health and the health of the child–an association that appears to involve the inheritance of epigenetic changes. In just the past few weeks, stories covering three separate studies have highlighted the apparent link between dad’s and baby’s health:

What is epigenetics: A Child’s Mental Fitness Could Be Epigenetically Influenced by Dad’s Diet

The Australian: Obesity risk for kids begins in womb

The Herald Sun in Melbourne: Fit fathers may boost brain health of their unborn babies

And that’s just over the past few weeks. Going back further you can find numerous stories on this topic in Nature, Huffington Post, Science, Discover Magazine and more. The overall message is that dads need to eat well and exercise if they want both physically and mentally fit children.

And it’s a nice message, it’s one we want to hear that both parent’s health play a role in their child’s well-being–but should we really believe it?

The first thing to realize is that these studies all are based on rodents. That’s not to discredit them, but it’s important to realize that results in these studies are a weak indicator of what happens in humans. Our ‘mental fitness’ involves far more inputs than do mice.

For humans, things like social context, parenting, mood and environment matter much more when shaping mental fitness. The same cannot be said of mice. There’s also the usual obstacles to keep in mind with epigenetic inheritance, in particular, that almost all of the epigenetic modifications on the genome of your father’s sperm are removed before fertilization. No one has yet shown how these changes bypass epigenetic reprogramming or are remembered and restored afterward. There are a lot of reasons not to believe that these results don’t translate to humans.

But so what? What’s the harm in telling dads to stay healthy? We already tell them to maintain their own health–why not scare men into thinking it matters for their children’s health too?

Here’s the issue though: Think about how that message reads for an obese dad. “If you’re out of shape when you conceive, your parenting doesn’t matter. You’ve already lost. Your child is already lost.” The reverse message may be even worse.

Yet intuitively, we know this isn’t true. Raising a healthy, well-adjusted human is a multi-faceted process. It takes a village. It takes patience and understanding. It can’t be boiled down to how many situps the dad could do around the time of conception.

How journalists and others report on the dad-child studies strikes at a major problem in communicating and understanding epigenetics. Too many studies in this field seem to explain or propose mechanisms that affect aspects of our health we already believe or want to believe: Dad’s health matters to a child; smoking causes health problems for the developing fetus; what we eat matters to our cancer risk; and that our genes don’t define us or our health.

Epigenetics is the sycophant of sciences.

Whether epigenetics actually explains these phenomena almost doesn’t matter for many. Environment (diet, exercise, etc.) controls our genes through epigenetics and we don’t need to worry about anything else. But the reality is that our physical and mental health depends on everything about us and we need to be good stewards of it all–diet, exercise, genes, happiness–to maintain good health.

What can college students and worms teach us about gene activity and sleep?

While previous work has shown that lack of sleep might cause methylation at the whole genome level, a team at Brown University is the first to identify specific genes in which methylation patterns differ among people who get a normal amount of sleep and those who fall short.

The remarkable adaptability of the octopus, with new evidence showing the creatures can alter the information copied from their DNA, is an example of epigenetics: modification of gene expression by factors “above” the DNA. But does this undermine Charles Darwin’s theory of evolution by natural selection?

Scientists have never been able to identify a single “drug addiction gene” and instead researchers are continuously adding to a long list of possible genes that may play a role in drug dependency.