The documentary space is filled with disparaging films about food science, including those that target biotechnology. Many of these films feature artistic flair, and tell a compelling story through the lens of the camera– even if it is not true. Filmmaker Nick Saik applies his craft to in the development of a science-based documentary about the use of technology to feed more people, more nutritious food. In this conversation, he discusses his motivations, his philosophies and release plans for the movie. 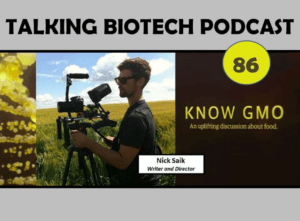