Since the 1960s, if you’ve needed a heart valve replaced, you likely got the spare part from a pig. Ever had surgery and received heparin to prevent blood clots? That medicine also came from a pig. If you were diabetic before the 1970s, your insulin came from a pig, too. And for the last decade, scientists have been tinkering with strategies to harvest even more human medical products from these animals.

Pigs are thought to be a good match for human organs because the species are genetically similar in some ways and are sized matched. At the time meat is harvested from a pig, for example, its heart is about the same size as that of an adult human. It’s not surprising then, that pork producers are positioning themselves to take advantage of emerging scientific advances that can take their companies from food producers to medical device makers. Smithfield, a large pork conglomerate, announced in April that it has formed a biotech division. From Reuters:

Smithfield already harvests materials for medical use from the 16 million hogs it slaughters each year. The company owns more than 51 percent of its farms and hopes to sell directly to researchers and health-care companies, which now typically buy from third parties.

Those medical materials include heart valves that are used to replace faulty ones in human patients and anti-clotting drugs used after surgeries. From the Atlantic:

A 1990 report from Purdue University’s Cooperative Extension Service runs through a long list of organs that can be used in pharmaceutical products: adrenal glands (steroids), pineal gland (melatonin), thyroids (thyroxine for metabolic disorders), parathyroids (hormones for blood calcium content), blood (thrombin for blood clotting), pituitary gland (several hormones including for growth), and on and on. Scientists now have found cheaper ways to make many of these pig-derived drugs synthetically, including insulin. Heparin is a major exception.

But there are several scientific obstacles to overcome before hearts, lungs and livers can be realistically transplanted from pigs into humans. And scientists are working on several different approaches to circumvent the human immune response that would attack a transplanted organ.

Decellularization uses chemical detergent to clean a pig organ of all its living cells, leaving behind a protein shell of the heart or liver. This is already done with heart valves that don’t need any live cells to function. But hearts and livers do require living cells. Some scientists think they could 3D print human cells onto that protein shell and transplant the resulting organ. One company, Miromatrix Medical thinks this is a good approach for liver transplants. From the Atlantic:

The ambitious next step is pig-to-human organ transplants. Miromatrix Medical, which currently offers decellularized matrix for wounds, is also working on growing whole organs. It starts with a similar process. The company takes a pig liver and removes all the cells, leaving only a ghostly, liver-shaped protein scaffold on which it then tries to grow human liver cells.

Other techniques involve using gene editing to cut out the bits of pig DNA that would cause organ rejection. Porcine DNA also includes chunks of viral DNA that could be harmful to humans. One company, eGenesis Bio, started by Harvard Geneticist George Church and colleagues plans to edit out that viral DNA, too. From Technology Review:

The group plans even more extensive modifications to pigs, including using gene editing to snip away pig molecules that the human body attacks. [Luhan] Yang [Chief Science Officer] says the company will also add to the pig’s genome genes that modulate the immune response and modify certain factors involved in coagulation. 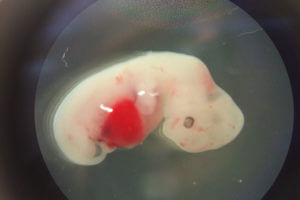 Still another technique uses a combination of genetic engineering and stem cells to try to grow human organs inside of pigs, starting when they are embryos. This type of research is highly controversial because it forms chimeric organisms, animals that also contain human cells. From Technology Review:

The new line of research goes further because it involves placing human cells into an animal embryo at the very earliest stage, when it is a sphere of just a dozen cells in a laboratory dish. This process, called “embryo complementation,” is significant because the human cells can multiply, specialize, and potentially contribute to any part of the animal’s body as it develops.

In January a team at the Salk Institute in La Jolla, California published results of their initial research into complementation. They were not very successful and remain highly controversial. The scientists weren’t able to control where exactly the human stem cells grew inside of the pig and most of the cells did not survive. The experiments again illustrated just how complicated it will be to create chimeric organs not just because of the ethical implications but also the intense scientific processes that must be overcome. Given that 10,000 Americans die each year waiting for a transplant, however, continued research seems imperative.