Among some GMO critics and skeptics, there is an oft-stated belief that organic farming is friendlier to the land and the environment. They argue that organic farmers take better care of their soil by avoiding many of the pesticides and herbicides used by conventional farmers.

It is an argument that has been challenged in recent years by dozens of studies that have examined factors such as crop yields and the use of land, pesticides and energy. And now a meta analysis of 164 scientific papers suggests that modern conventional farming has a clear advantage over organic farming in several key areas, particularly in the amount of land required to produce the same volume of crops. There are, however, some things that conventional farming could learn from organic systems, according to the authors.

The paper, published in June in the journal Environmental Research Letters, was written by Michael Clark, a University of Minnesota graduate student who researches the environmental and health impacts of dietary changes, and David Tilman, an ecology professor at the university. The researchers compared the impact of conventional versus organic farming in five areas: land use; greenhouse gas emissions; energy use; acidification potential (the increase of acidity in the ecosystem, which can impede plant growth); and eutrophication potential (increases here can impact the environment by increasing algal blooms and aquatic dead zones).

And organic farming came up short, according to the study:

One of the more significant problems facing organic farms is a pronounced yield gap – particularly when it comes to row crops – compared to conventional farming. Organic farms required 25 to 110 percent more land to make up for that gap, according to the study. And while organic farms tend to use less energy (15 percent lower), that doesn’t translate into significantly lower greenhouse gas emissions (4 percent lower).

This sort of trade-off is also seen in the impact of these farm systems on nearby biodiversity. The researchers said biodiversity tends to be stronger near organic farms, likely because of lower use of fertilizer, herbicides and pesticides. 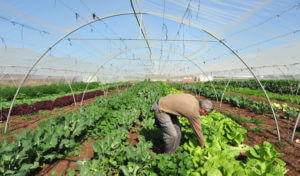 Still, they stopped well short of criticizing organic agriculture. They argued that half of the land-use difference between organic and conventional could be eliminated through better use of “rotational farming, cover cropping, multi-cropping, and polyculture.” They also suggested that we would do well to consider some of the features of organic systems while looking for ways to improve the efficiency of crop production without damaging the land:

The overall analysis is in line with previous work on the subject. Studies have shown that organic crops lag behind their conventional counterparts by 10 to 35 percent on a yield per-acre basis. The gap can be even higher with some grains and vegetables. These gaps have been established both by meta-analysis of published research and by USDA surveys. In 2012, a team of Canadian and US researchers published a report in Nature, detailing their meta analysis of crop data for conventional versus organic farming. Among their conclusions:

Our analysis of available data shows that, overall, organic yields are typically lower than conventional yields. But these yield differences are highly contextual, depending on system and site characteristics, and range from 5% lower organic yields (rain-fed legumes and perennials on weak-acidic to weak-alkaline soils), 13% lower yields (when best organic practices are used), to 34% lower yields (when the conventional and organic systems are most comparable). 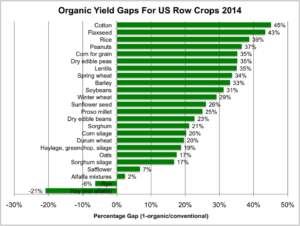 For 2014 in the US, agricultural scientist and consultant Steve Savage examined USDA data and found organic corn faced a 35 percent shortfall; soybeans 31 percent; and cotton 45 percent.

Related article:  Funnel web spider venom kills a human in an hour—can we use it to battle deadly honeybee pests?

If our world had a static population, these shortfalls might not be so critical. But our population is rising, and people around the globe are demanding higher quality food and nutrients.

Global food output is expected to roughly double by 2050. And while organic farming has much to offer, it can’t compete with conventional farming in terms of food production.

Ramez Naam, author of Infinite Resource: The Power of Ideas on a Finite Planet, has outlined the consequences of converting the world to an organic-focused farming system. One feature not often highlighted–the need for a dramatic increase in the number of cows needed to generate organic fertilizer, and its ecological consequences:

If we wanted to reduce pesticide use and nitrogen runoff by turning all of the world’s farmland to organic farming, we’d need around 50% more farmland than we have today. … the world would need an additional 5 to 6 billion head of cattle to produce enough manure to fertilize that farmland. There are only an estimated 1.3 billion cattle on the planet today. Combined, we’d need to chop down roughly half of the world’s remaining forest to grow crops and to graze cattle that produce enough manure to fertilize those crops. Clearing that much land would produce around 500 billion tons of CO2, or almost as much as the total cumulative CO2 emissions of the world thus far.  And the cattle needed to fertilize that land would produce far more greenhouse gasses, in the form of methane, than all of agriculture does today, possibly enough to equal all human greenhouse gases emitted from all sources today. That’s not a viable path.

Still, organic farming advocates say that argument misses the point: Organic and non-GMO farming are necessary components to preventing the degradation of the soil that has occurred in some regions of the world as part of the Green Revolution, dependent on fertilizers and pesticides, which dramatically altered farming practices 60 years ago.

Mark Smallwood, Executive Director of the Rodale Institute, which has pioneered organic farming in the United States, maintains the principles of organic farming are both sustainable and practicable. According to the Washington Post, he has challenged “the incorrect notion that humans are smarter than Mother Nature, and we need man-made answers. We always rely on cultural practices, methodologies and products aimed at working with nature, and synthetics throw off that balance.” Smallwood emphasizes that soil health is critical, and that building it is the way to “leave more resources for future generations.”