A particular application of biotechnology, genetically-engineered crops, has dominated public debate of late. But often forgotten in the fiery fray is that biotechnology shows promise far beyond the farm. In fact, scientists are using the same gene editing tools in agriculture to solve a variety of serious problems that affect people all over the world. Let’s look at two examples that could convince those afraid of biotechnology to embrace it instead.

Cancer is a truly evil disease. It kills millions of people every year and is notoriously difficult to treat. This is in part because many cancers have evolved resistance to chemotherapy drugs that are otherwise effective treatments. In small cell lung carcinoma, for instance, cancer cells are equipped with a pump that allows them to eject drugs that would typically bind to the cells and kill them, making the disease effectively untreatable.

This is where biotechnology steps in. Thanks to genome sequencing, scientists know which gene is ultimately responsible for this pump on cancer cells. Using a mechanism called RNA interference (RNAi), cancer researchers are able to silence (turn off) this pump gene and thus make the cancer cells sensitive to chemotherapy again. This innovation is in its infancy, but RNAi is helping experts develop more targeted cancer drug therapies, and there are dozens of clinical trials in progress to test RNAi-based cancer treatments.

RNAi, you may recall, can also be used by geneticists to control diseases that destroy wheat crops. If you can treat someone’s cancer with the same technology, perhaps you can also convince them that their breakfast cereal containing genetically modified crops isn’t as harmful as they thought.

Landmines leftover from past wars have killed thousands of people in developing nations around the world. These landmines also pollute the local environment and can kill organisms living in or near the soil where they are buried. The traditional method of detecting unwanted mines is to use a long stick, but this isn’t exactly optimal.

Genetic engineering is leading to a safer method of mine detection, thankfully. There are bacteria capable of metabolizing the explosives, usually TNT, in landmines. There are also fish that glow green when exposed to UV light. Once scientists discovered that they could move genes between species, several creative research teams took the green fluorescence gene from jellyfish and added it to the genomes of these TNT-munching bacteria. These experiments produced different strains of bacteria that, when sprayed on the soil, could detect TNT and other explosives in the mines buried under the surface. The researchers were then able to remotely detect the landmines because the bacteria glowed green when exposed to UV light. 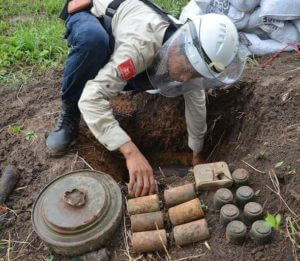 These bacterial biosensors, as they’re called, are imperfect solutions. Getting them out of the soil once they’ve done their job poses an interesting challenge. So, scientists have also developed transgenic plants with the same capability that are easier to remove. These plants contain a gene that enables green (or red) fluorescence and a bacterial gene promoter that tells the plant when TNT is nearby. When the plant’s roots take up TNT, its leaves also glow when exposed to UV light.

The technology has to be developed cautiously because there are a lot of variables in play. Nonetheless, landmine-detecting plants and bacteria provide another example of how genetic engineering could improve (or save) the lives of thousands of people.

There will always be opposition to scientific advancement, sadly. But instead of simply playing defense, scientists should showcase the many areas of life improved by biotechnology. If they do, the debate will shift. On one side, we’ll have scientists who produce new medicines, safer food, and bomb-detecting plants. On the other side, we’ll have activists who just complain about all these innovations. I know which side I find more convincing.

Cameron English is a freelance science writer and podcast host. He covers nutrition, public health, biotechnology and occasionally other topics. He lives in California with his fiance and lab-cocker spaniel puppy. Visit his website and follow him on Twitter.

This article was originally published at Real Clear Science as “There’s More to Biotechnology Than Roundup Ready Crops” and has been republished here with permission.