A view from CRISPRcon: Hope, promise and ‘an unmistakable sense of urgency’

This article or excerpt is included in the GLP’s daily curated selection of ideologically diverse news, opinion and analysis of biotechnology innovation.
The title of this article is partially borrowed from a fascinating Lightning Presentation delivered by John Doench of Broad Institute at CRISPRcon this year.

In his talk, Mr. Doench pointed out how we’ve been looking up to this promising technology for a while now, hoping it will deliver the anticipated results (see image):

And for a second consecutive year, people from different walks of life gathered at this event to figure out how they could contribute to the discussion.

But this year was different. There was an unmistakable sense of urgency surrounding when and how (and most importantly, if) we get to use CRISPR. Just before day one of the conference, CRISPR Therapeutics issued a press release announcing that the FDA is putting the brakes on the development of CTX001, the world’s first gene-based treatment for sickle cell disease. The FDA is for now prohibiting the company from moving forward with preliminary trials in adult volunteers, which means this promising treatment is effectively stuck in its own kind of development hell.

“Gene therapy can be set back more than a decade by a death in a clinical trial”, said Kevin Esvelt, head of the Sculpting Evolution Group at MIT Media Lab. But what happens if we don’t even get to the clinical trial stage?

The future of human society and human life is dependent on not only whether we use technologies available to us, but whether we will use them in time to protect people from suffering and premature death – and while measuring risks to make informed decisions is necessary, this cannot become a permanent roadblock to helping those who desperately need it. “Among 7,000 rare diseases, less than 5 percent have FDA approved treatments”, said Taylor Kane, rare disease advocate and founder of non-profit organization Remember the Girls. “In rare disease community, ethical concerns come second. It’s not about your identity, it’s simply life or death”.

This was a necessary harsh-light-of-day perspective coming from someone actually dealing with an inherited medical condition. While many opponents of gene editing are citing concerns about inevitably forcing a person’s life under evaluation (specifically whether or not it’s a life worth living), the real concern here is how a person’s right to have autonomy over their own body and health is being diluted in the debate.

So where does it leave us?

The final panel of day two, Infinity and Beyond, discussed the technical and societal limits of gene editing. “We don’t always share the same goals”, said Reverend Kevin FitzGerald of Georgetown University. “What’s fearful for one is inspiring for someone else”. This underscored the main difficulty when trying to come to an agreement about the use of these technologies – if we’re searching for different things in different directions, is it even possible to meet halfway, or anywhere at all? And what happens while we decide on the best course of action?

Indeed, Professor George Church of Harvard, who is known for his numerous contributions to the fields of genomics and synthetic biology, emphasized the importance of germline editing – a controversial topic that divides many scientists but is arguably the most important step towards permanently repairing damaged parts of human DNA. “We need to find out if it’s safe and effective, rather than outright banning it”, said Prof. Church. At this time however, FDA is not permitted to consider INDs involving CRISPR of human embryos even for safety and efficacy testing.

At the end of day two, the attendees were encouraged to share their final thoughts about further steps. Here they are (picture below).

So, shall we get to work? 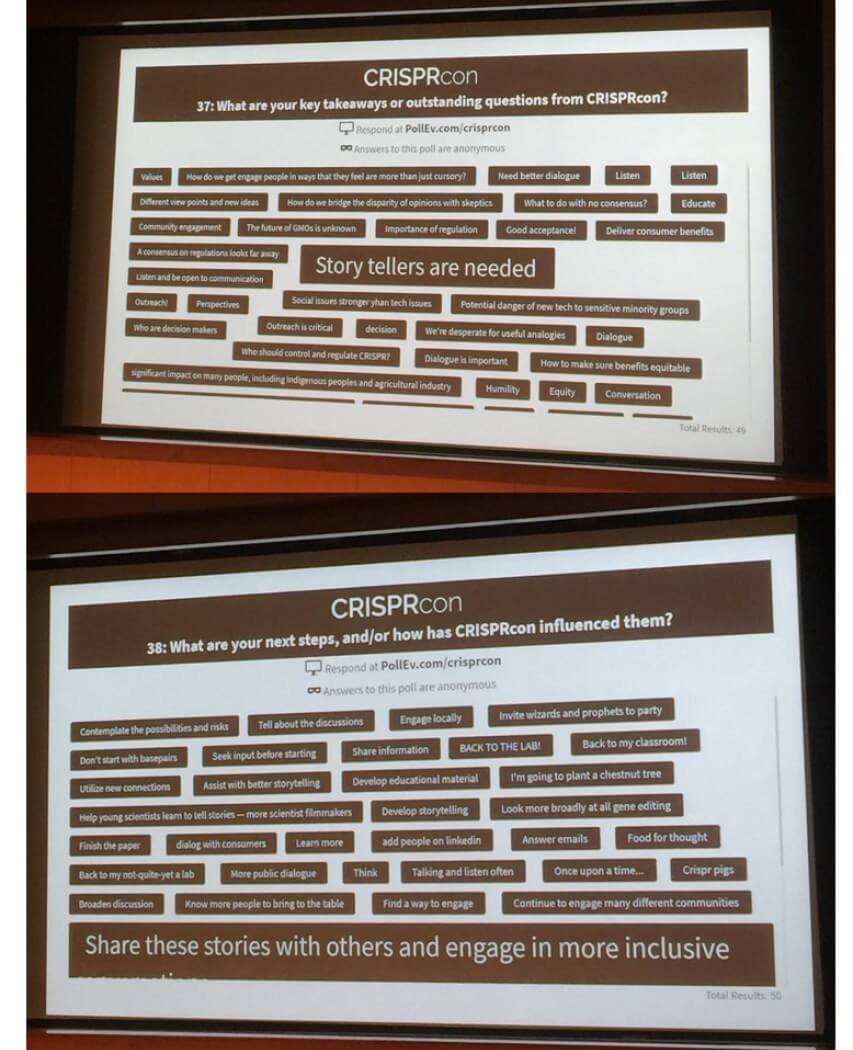 Anna Everette is a freelance writer with a keen interest in genomics and biotechnology. Follow her on Twitter @annaeverette16

This article originally appeared at The Niche as The Hope of CRISPRcon: Year 2 and has been republished here with permission.