What can sexual pleasure teach us about behavioral learning?

This article or excerpt is included in the GLP’s daily curated selection of ideologically diverse news, opinion and analysis of biotechnology innovation.
How do rats know when their partners are feeling amorous? One way female rats show they’re feeling frisky is to wiggle their ears – or rather, very rapidly shake their head, so that it looks like their ears are moving. So when Mary Holder, a neuroscientist working at the School of Psychology at Georgia Tech, sees lady rats wiggling their ears, she knows they’re ready to mate.

To the casual observer, studying ear wiggling in rats might seem trivial, but rat sex is actually crucial in improving our understanding of sexual behaviors in mammals. This kind of research is harder than it sounds: although rats have been used for decades as models of mammalian diseases and behaviors, they are nocturnal – meaning they engage in sex during the night. So in order to study rats’ sexual behaviors, Holder explains, “We had the rats [in the lab] on a reversed light cycle, so that the lights would go off around 10 or 11 a.m. I would be in a room illuminated by a red light, watching the behaviors. The biggest thing for me was to stay a consistent distance away … to almost become part of the environment.”

This kind of scientific dedication has resulted in interesting discoveries, with implications for human behavior. For example, by observing rats, researchers at Cinvestav Sede Sur and Instituto Nacional de Psiquiatría Ramón de la Fuente in Mexico recently discovered that opioids in the brain don’t just make us feel good during sex – the pleasure we feel might actually be helping us learn. 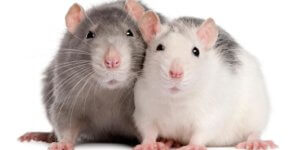 Sex is innately rewarding. The behavior is associated with the activation of opioid receptors in “reward centers” of the brain. Activation of these centers is also a key component to the development of addiction. The process of addiction involves learning to associate some sort of external cue, like a particular environment, with a rewarding outcome, like a high. But this reward-driven process is not just involved in the development of addictive behaviors – it’s also important for the development of both vocalizations and movements. So, strangely, opioids (the reward that makes us feel good) released during sex (the behavioral cue) are therefore well-suited to be involved in behavioral learning.

To examine this process, researchers observed how good male rats were at sex – they counted both how long it took to initiate a sexual interaction and how long it took them to ejaculate. In this case, quick interactions and ejaculations were considered better, since the goal of male rats is to reproduce as much as possible. The scientists watched rats with a lot of sexual experience, rats with no prior sexual experience, and rats that had recently ejaculated. They then examined the densities and distributions of opioid receptors in the rats’ brains and compared the three groups.

What they found was that opioids released during sex might also help us learn to be better at sex. Unsurprisingly, male rats that were more sexually experienced – those who had copulated five separate times – had gotten better at sex; they had fewer intromissions before copulation and less time-to-ejaculation. Interestingly, this also resulted in differences in their brains. In sexually experienced rats, the majority of opioid receptors were not found on the bodies of cells, but rather on the cell membranes. This means that sex increased the number of receptors that can actually be activated by opioids, allowing for more pleasure during copulation.

Related article:  Men are less tolerant than women when it comes to repeated pain, study shows
Follow the latest news and policy debates on agricultural biotech and biomedicine? Subscribe to our newsletter.
SIGN UP

Weirdly though, sexually experienced rats also had less total opioid receptors in their brains. This is surprising, since opioids are released during sex, and more sex might logically mean more opioids in the brain. However, it’s possible that repeated exposure to opioids might have downregulated, or reduced, the density of opioid receptors in their brains. Fewer receptors might help brain cells process high concentrations of opiods caused by repeated sexual activity, so that that homeostasis – a physiological equilibrium – is maintained.

Intriguing as these results are, it’s important to note that the researchers couldn’t actually look at rapid changes to opioid receptors within a single rat. The way this study was designed, researchers could only compare between groups of rats, rather than looking at changes within one rat as it gained sexual experience. In contrast, in studies of brain activation in humans, a positron emission topography (PET) scan has allowed researchers to examine changes within the brain of a single individual. PET scans have been used to both study changes in human brain activation with ejaculation and changes to opioid receptors as people were exposed to pain. Additional research that used PET scans of opioid receptors in rats as they increase their sexual experience could provide further insight into the role of opioids in learning to be better at sex.

Even with the study’s limitations, it’s remarkable that opioid receptors differ between more and less sexually experienced rats. That these differences coincide with improvements in male sexual performance suggest that opioids released during sex not only make us feel good, they help us learn to be better at sex. Since a natural reward – in this case, sex – induced changes in the brain, as well as changes in behavior, this study has implications for understanding the role of opioids in learning other reward-driven behaviors.

There have been a few studies on how opioids affect sensory learning and memory formation, but this research suggests an intriguing new idea – that opioids might also be involved in behavioral learning.

A version of this article was originally published on Massive’s website as “Sexual pleasure might help us learn – if rats are any guide” and has been republished here with permission.