On August 29, the FDA threw its hat into California’s eternal does-or-doesn’t-coffee-cause-cancer fight.

“Requiring a cancer warning on coffee, based on the presence of acrylamide, would be more likely to mislead consumers than to inform,” the federal agency’s statement read. That’s because scientists are in near uniform agreement that coffee doesn’t cause cancer – its safety is reinforced by some of the most comprehensive data available. But since coffee contains a chemical called acrylamide, California’s Proposition 65 law requires the beverages to bear a warning. The law is broken, and its inconsistency is just part of the reason why Californians pay these warnings little mind.

So in August’s waning days, the rules governing Proposition 65 warnings changed to make them more informative. Now, rather than vague notices about cancer and reproductive harm, California law requires manufacturers to identify which specific chemical on the state’s list of roughly 900 carcinogens and reproductive toxins an item might expose consumers to.

The change is both good and wholly insufficient for addressing Proposition 65’s failures.

At the very least, consumers can google the newly identifiable chemical to discover whether a warning should actually be heeded – as might be the case for items containing lead or the plastic softener DEHP when destined for a house with young children. Googling the acrylamide warning on coffee would inform consumers of the warning’s needlessness and the clamor to restore coffee’s good name. 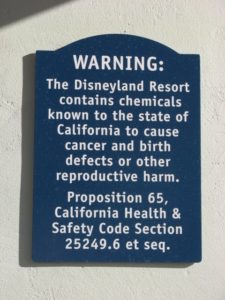 This whole coffee brouhaha speaks to the most dangerous failure of Proposition 65, one which these more elaborate notices fail to rectify: overwarning.

It’s no exaggeration when pundits call these warnings ubiquitous. As a youngster in Southern California, I remember reading the notices that Disneyland’s parking garage and my local mall contained chemicals known to cause cancer, birth defects, or reproductive harm. Better yet, I remember my mother dispelling my alarm with the first rule of being Californian: Everything is made up and the warnings don’t matter.

The signs were so common, appearing on everything from mugs to flip flops, that I also began to tune them out. Unfortunately, there’s evidence that this kind of warning fatigue is taking its toll. California’s rate of several common cancers — Non-Hodgkin’s lymphoma, and ovarian, testicular, and stomach cancers among them – are either no different from or higher than the national average. That’s not a great outcome for a law aimed at protecting public health. And though Californians are ignoring the warnings, a group of serial litigants have made a $300 million cottage industry suing companies that fail to display them.

Even state officials know they have a problem. “There’s a danger to overwarning — it’s important to warn about real health risks,” a spokesperson of California’s Office of Environmental Health Hazard Assessment (OEHHA) told The New York Times. A major contributor to the problem is that Proposition 65 doesn’t require a causal link between a product and an adverse health effect, nor even between the amount of a chemical in a product and an adverse health effect. As a result, items like coffee are under legal obligation to bear warnings when no real risk exists.

How does this happen? OEHHA sets acceptable exposure levels for reproductive toxins by arbitrarily dividing the chemical’s observed safe exposure level by 1,000. For suspected carcinogens, the safety threshold is set low enough that someone exposed to the chemical every day for life would have less than a 1 in 100,000 chance of developing cancer. These cutoffs are meaninglessly low.

Certainly, no one wants to flirt with the line between safe and unsafe exposure. But for those who believe such a wide margin of safety is justified, consider this: The level of formaldehyde that requires a Proposition 65 warning in California is less than the amount of formaldehyde we naturally exhale throughout the day. According to California law, human breath poses an unacceptable cancer risk.

All of the law’s shortcomings can be boiled down to this single flaw. If California only required warnings on products that truly yielded an unacceptable health risk, people would see them less often. They’d likely take the warnings more seriously. And businesses selling harmless products wouldn’t face broad daylight extortion simply because a listed chemical is present in trace amounts in their products. After all, it’s the dose that makes the poison.

For more than 30 years, Proposition 65 has operated with little change to how it evaluates chemicals, despite major toxicological advancements in the past decade. If we truly want to protect public health, we can’t simply wait for state officials to intervene every time something as safe as coffee lands under the law’s black list, nor can we be complacent in allowing the warnings on less familiar products that carry an equally negligible risk.

OEHHA should base its chemical safety thresholds on real data: typical exposure patterns, modern toxicological and epidemiological data, and considerations for vulnerable populations, like pregnant women and newborns. If businesses losing millions each year to the law isn’t compelling enough, perhaps the consequences of overwarning will finally inspire action.

Breanne Kincaid is a California native and Research Director at the Washington, DC-based Center for Accountability in Science

A version of this article originally appeared at RealClearScience as In California, Human Breath Is a Cancer Risk and has been republished here with permission.