In a word, yes. When industry funds science, credibility suffers. And this does not bode well for the types of public-private research partnerships that appear to be becoming more prevalent as government funding for research and development lags.

The recurring topic of conflict of interest draws its share of headlines. The National Academies of Science, Engineering, and Medicine has revised its conflict of interest guidelines following questions about whether members of an expert panel on GMOs had industry ties or other financial conflicts that were not disclosed in the panel’s final report.

Our own research speaks to how hard it may be for the public to see research as useful when produced with an industry partner, even when that company is just one of several collaborators.

What people think of funding sources

We asked our study volunteers what they thought about a proposed research partnership to study the potential risks related to either genetically modified foods or trans fats.

We randomly assigned participants to each evaluate one of 15 different research partnership arrangements – various combinations of scientists from a university, a government agency, a nongovernmental organization and a large food company.

For example, 1/15th of participants were asked to consider a research collaboration that included only university researchers. Another 1/15th of participants considered a research partnership that included both university and government scientists, and so on. In total we presented four conditions where there was a single type of researcher, another six collaborations with two partners, four with three partners and one with all four partners. 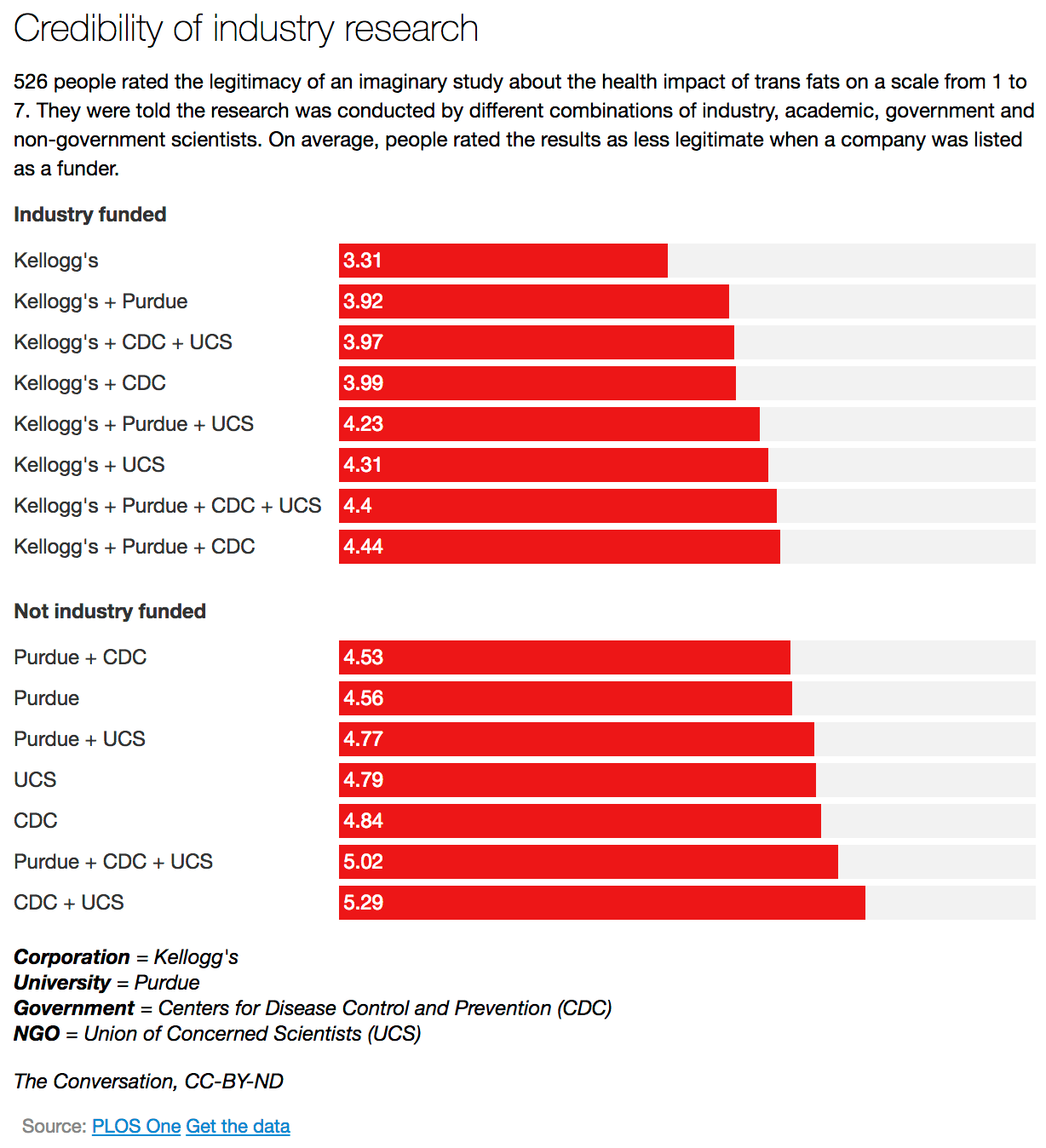 When a research team included an industry partner, our participants were generally less likely to think the scientists would consider a full range of evidence and listen to different voices. An industry partner also reduced how much participants believed any resulting data would provide meaningful guidance for making decisions.

At the outset of our work, we thought including a diverse array of partners in a research collaboration might mitigate the negative perceptions that come with industry involvement. But, while including scientists from a nonindustry organization (particularly a nongovernmental organization) made some difference, the effect was small. Adding a government partner provided no substantive additional benefit.

When we asked participants to describe what they thought about the research partnership in their own words, they were skeptical whether an industry partner could ever be trusted to release information that might hurt its profits.

Our results may be even more troubling because we chose a company with a good reputation. We used pretests to select particular examples – of a corporation, as well as a university, government agency and nongovernmental organization – that had relatively high positive ratings and relatively low negative ratings in a test sample.

Can industry do valid science?

You don’t have to look far for real-life examples of poorly conducted or intentionally misleading industry research. The pharmaceutical, chemical, nutrition and petroleum industries have all weathered criticism of their research integrity, and for good reason. These ethically questionable episodes no doubt fuel public skepticism of industry research. Stories of pharmaceutical companies conducting less than rigorous clinical trials for the benefit of their marketing departments, or the tobacco industry steadfastly denying the connection between smoking and cancer in the face of mounting evidence, help explain public concern about industry-funded science.

Related article:  Why Ugandan banana breeders say it's critical to add genetic engineering to their toolbox

But industry generally has a long and impressive history of supporting scientific research and technical development. Industry-supported research has generated widely adopted technologies, driven the evolution of entire economic sectors, improved processes that were harmful to public health and the environment and won Nobel Prizes. And as scientists not currently affiliated with industry scramble to fund their research in an era of tight budgets, big companies have money to underwrite science.

Can this lack of trust be overcome? Moving forward, it will be essential to address incentives such as short-term profit or individual recognition that can encourage poor research – in any institutional context. By showing how quickly people may judge industry-funded research, our work indicates that it’s critical to think about how the results of that research can be communicated effectively.

Our results should worry those who want research to be evaluated largely on its scientific merits, rather than based upon the affiliations of those involved.

Although relatively little previous scholarship has investigated this topic, we expected to find that including multiple, nonindustry organizations in a scientific partnership might, at least partly, assuage participants’ concerns about industry involvement. This reflects our initial tentative belief that, given the resources and expertise within industry, there must be some way to create public-private partnerships that produce high-quality research which is perceived widely as such.

Our interdisciplinary team – a risk communication scholar, a sociologist, a philosopher of science, a historian of science and a toxicologist – is also examining philosophical arguments and historical precedents for guidance on these issues.

Philosophy can tell us a great deal about how the values of investigators can influence their results. And history shows that not so long ago, up until a few decades after World War II, many considered industry support a way to uphold research integrity by protecting it from government secrecy regimes.

Given the central role that industry plays in scientific research and development, it is important to explore strategies for designing multi-sector research collaborations that can generate legitimate, high-quality results while being perceived as legitimate by the public.

This article originally appeared on the GLP on May 15, 2017 and was first published at The Conversation as “People don’t trust scientific research when companies are involved” and was republished with permission.

John Besley is a professor of advertising and public relations at Michigan State University.  Follow him on Twitter @JohnBesley. Aaron McCright, Joseph Martin, Kevin Elliot, and Nagwan Zahry are co-authors of this article