Mosquito massacre: Can we safely tackle malaria with a CRISPR gene drive?

Ricki Lewis | October 2, 2018
This article or excerpt is included in the GLP’s daily curated selection of ideologically diverse news, opinion and analysis of biotechnology innovation.

CRISPR-Cas9 gene editing quickly decimated two caged populations of malaria-bearing mosquitoes (Anopheles gambiae) in a recent study, introducing a new way to solve an age-old problem. But the paper describing the feat in Nature Biotechnology had a broader meaning regarding the value of basic research. It also prompts us to consider the risks and rewards of releasing such a powerful gene drive into the wild.

Instead of altering a gene affecting production of a reproductive hormone, the editing has a more fundamental target: a gene that determines sex. The work was done by Andrea Crisanti and colleagues at Imperial College London. Their clever use of the ancient insect mutation doublesex rang a bell for me — I’d used a fruit fly version in grad school.

Blast from the past

In the days before genome sequencing, geneticists made mutants in model organisms like fruit flies to discover gene functions. I worked on mutations that mix up body parts. 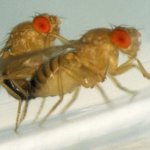 To make mutants, I’d poison larvae or schlep them, squiggling through the goop in their old-fashioned milk bottles, from the lab at Indiana University in Bloomington to the children’s cancer center in Indianapolis and zap them with x-rays. Crossing the grown-up larvae to flies that carried already-known mutations would reveal whether we’d induced anything of interest in their offspring. One of the mutations we used in these genetic screens was doublesex.

A suite of genes determines sex in insects, not just inheriting an X or Y chromosome. Doublesex acts at a developmental crossroads to select the pathway towards femaleness or maleness. When the gene is missing or mutant, flies display a mishmash of sexual parts and altered behavior. Males with doublesex mutations “are impaired in their willingness to court females,” according to one study, and when they do seek sex, they can’t hum appropriately and “court other males at abnormally high levels.”

Back then, we used doublesex as a tool to identify new mutations. We never imagined it being used to prevent an infectious disease that causes nearly half a million deaths a year, mostly among young children.

In grad school, we bred flies for many generations to select a trait, because a mutation in a carrier passes to only half the offspring. A gene drive speeds things by messing with Mendel’s first law, which says that at each generation, each member of a pair of gene variants (alleles) gets sent into a sperm or egg with equal frequency.

Austin Burt, a co-author of the new paper, introduced the idea of a gene drive in 2003, pre-CRISPR. The intervention uses a version of natural DNA repair that snips out one copy of a gene and replaces it with a copy of whatever corresponding allele is on the paired chromosome. Imagine dance partners, removing one, and inserting an identical twin of the other.

In the language of genetics, a gene drive can turn a heterozygote (2 different copies of a gene) into a homozygote (2 identical copies). 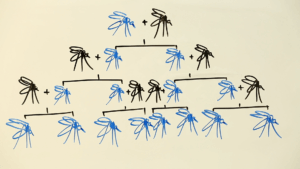 In 2014, Kevin Esvelt, George Church, and their colleagues at Harvard suggested how to use CRISPR-Cas9 gene editing to speed a gene drive. It made so much sense that in 2016, the National Academies of Sciences, Engineering, and Medicine issued a report urging caution while endorsing continued laboratory experimentation and limited field trials of gene drives.

The idea to genetically cripple mosquito reproduction isn’t new. But a CRISPRed gene drive to do so would be fast, leading to mass sterility within a few generations, with the population plummeting towards extinction. And doublesex is an inspired target. It’s so vital that only one variant in Anopheles gambiae is known in the wild — any other mutations so impair the animals that they and their genes don’t persist. That’s why the gene can’t mutate itself back into working, like bacteria developing antibiotic resistance. For doublesex, resistance is futile.

The doublesex gene consists of 7 protein-encoding exons and the introns that separate them. The gene is alternatively spliced: mosquitoes keeping exon 5 become females and those that jettison the exon develop as males.

The researchers injected mosquito embryos with CRISPR-Cas9 engineered to harpoon the boundary between intron 4 and exon 5 of the doublesex gene. They added genetic instructions for red fluorescent protein on the Y chromosome to mark male gonads, so the researchers could distinguish the sexes.

The modified female mosquitoes were weird. They sported male clasper organs rotated the wrong way and lacked parts of the female sex organ repertoire. They had feathery male-like “plumose antennae,” neither ovaries nor female sperm holders, yet male accessory glands and in some individuals “rudimentary pear-shaped organs resembling unstructured testes.” Most importantly, the doctored females couldn’t bite or suck up blood meals.

The researchers set up two cages, each housing 300 females with normal doublesex genes, 150 normal males, and 150 males that had one copy of normal doublesex and one modified copy, called CRISPRh. Then the insects mated. (For a scintillating description of fly sex see A Fruit Fly Love Story: The Making of a Mutant.)

Within 7 generations in one cage and 11 in the other, all the female flies had CRISPRh and couldn’t mate. Because males with one copy of CRISPRh are fertile, the populations chugged along until the gene drive rendered all the females homozygous. With two copies of the modified doublesex gene, they couldn’t eat or mate.

Gene editing of doublesex presents a question of balance. The investigators dub it “an Achilles heel” common to many insect species, yet at the same time, the DNA sequences are species-specific enough to not spread to other types of insects. A gene drive that kills off bees or aphids, for example, would be disastrous.

Next will come experiments in “large confined spaces” more like nature. Cooped up, mosquitoes don’t have much to do besides breed. In a more natural setting, they’d have to compete for resources and mates, confront changing conditions, and avoid being eaten. But computer simulations suggest that adding these stresses would only slightly slow spread of the gene drive.

Field tests are 5 to 10 years in the future, the researchers say. Dr. Burt estimates that releasing a few hundred doctored mosquitoes at a time, into selected African villages, might knock down populations sufficiently to wipe them out, even over a wider range. Local eradication of malaria would take about 15 years once a gene drive begins, he projects. 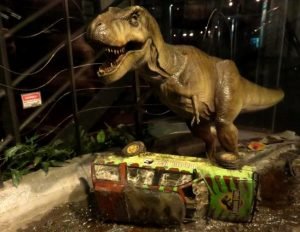 Will nature find a way around gene drives?

What about “unforeseen consequences” of unleashing a gene drive to vanquish malaria-bearing mosquitoes? To quote fictional mathematician Ian Malcolm in discussing the cloned dinosaurs of Jurassic Park, “Your scientists were so preoccupied with whether they could, they didn’t stop to think if they should.”

We’re past the “could” stage with a doublesex-mediated gene drive against the mosquitoes. But perhaps we shouldn’t ignore the history of biotechnology. Even though no superbugs or triple-headed purple monsters have escaped from recombinant DNA labs since self-policing began at the Asilomar meeting in 1975, pollen from genetically modified crops has wafted well beyond treated fields. Sometimes, as Dr. Malcolm said, “life, uh, finds a way.”

Yet the severity and persistence of malaria may justify the risk of unforeseen consequences in developing a gene drive.

About 216 million malaria cases occurred globally in 2016, with an estimated 445,000 deaths, according to the WHO’s World Malaria Report 2017, which states that “after an unprecedented period of success in global malaria control, progress has stalled.” Said Dr. Crisanti, “2016 marked the first time in over two decades that malaria cases did not fall despite huge efforts and resources, suggesting we need more tools in the fight. This breakthrough shows that a gene drive can work, providing hope in the fight against a disease that has plagued mankind for centuries.”

Just like recombinant DNA entered the clinic in 1982 with FDA approval of human insulin produced in bacteria, the first gene drive, whatever it may deliver, could open the door for many others, just as dozens of drugs are now based on combining genes of different species. Doublesex, the mutation that I used in graduate school to screen new mutations, is one gene of thousands in just that one species. If and when gene drives are validated, the possibilities to limit or eradicate infectious diseases are almost limitless, thanks to the genetic toolboxes provided from decades of basic research.