Are we ready for the artificial womb?

This article or excerpt is included in the GLP’s daily curated selection of ideologically diverse news, opinion and analysis of biotechnology innovation.
Are you interested in having children, but turned off by the whole pregnancy thing? Well, there may be an option available in the not-too-distant future. The artificial womb–or at least the ability to create one–is inching its way toward us. The big question is whether or not society is ready for it.

The obstacles to ectogenesis–development of the fetus outside of a mother from fertilization to full-term infancy–will soon be dominated more by legal and ethical matters than by technological and medical limitations. Those who embrace technology without reservation may be waiting with open arms. But there will certainly be others who find the prospect disturbing.

State of the technology

Currently, survival rates are low for infants born at less than 23 weeks of gestation. The absolute age record for survival is 21 weeks and 5 days, which happened in Canada in 1987 (and again in 2010). The main problem for newborns at that early stage of development is the lungs–they simply aren’t strong enough to sustain life. That’s even when the fetus is treated prior to birth to accelerate lung development, and then supported with mechanical ventilation.

The lungs, in fact, are the basis for the concept of fetal viability–a concept that has come into play for decades in legal matters surrounding abortion policy. But lung assist devices now under development could substantially expand the survival window, rendering the modern concept of viability obsolete.

Normally, at birth, circulation of blood switches from fetal to post-birth pattern. In the fetus, venous blood returning from body tissues moves through a pair of umbilical arteries to the placenta. From there, blood goes through the mother’s veins to the right side of the mother’s heart, and then to her lungs, where oxygen is picked up and carbon dioxide (CO2) is released. The left side of the maternal heart pumps the oxygenated blood through maternal arteries to the placenta. From there, it goes though the umbilical vein and back to the fetus. Freshly oxygenated, this blood mostly bypasses the fetal lungs, which are closed off by high pressure. 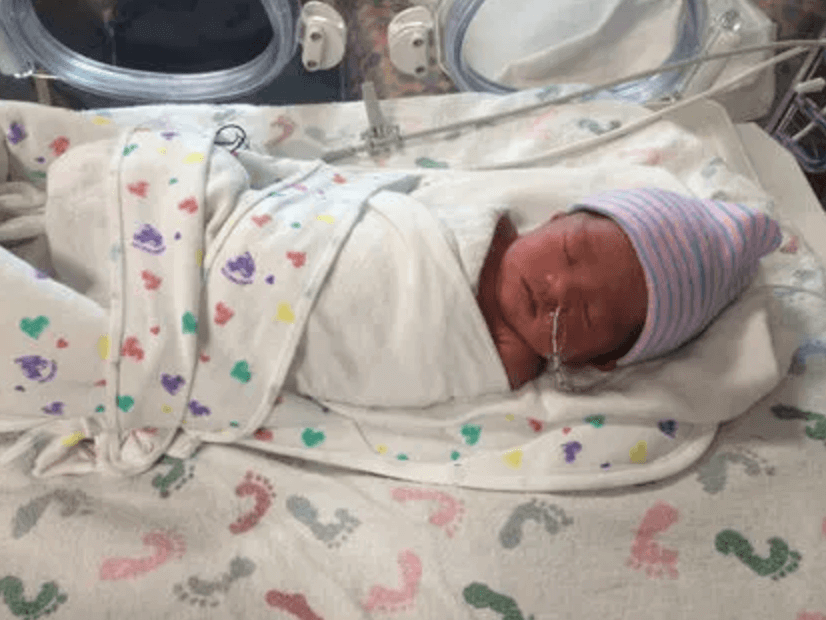 At birth, the pressure in the fetal pulmonary circulation suddenly drops and the lungs inflate. That enables the newborn to oxygenate its own blood–as long as the lungs are mature enough. If the lungs are underdeveloped, mechanical ventilation can compensate to a degree, but otherwise lung inflation fails and the infant dies.

The current equation changes if researchers can bring better lung assist devices into play. They actually call them ‘artificial placentas,’ because they take on a major chunk of the job description of the natural placenta, and of the mother’s lungs.

The devices, still in development, would be used when standard interventions — such as accelerating lung development, spraying ‘surfactants’ into the lungs (agents that keep the surface tension between liquid and air low), and putting the infant on a ventilator–prove inadequate. The artificial placenta would be connected to the newborn’s blood supply. If done immediately after birth, the connection could be made through the umbilical blood vessels. If you’ve ever seen a birth, you saw the umbilical cord clamped and cut soon after the baby came out. But if left uncut, the vessels can remain open and functional for a few days, even in a baby with no breathing problems.

Related article:  How CRISPR and other gene-edited crops are regulated in the United States and around the world: A scholarly review

Initially, the role of an artificial placenta would be to supplement other treatments in premature infants born near that 23-week danger zone, where survival is currently just 17 percent. That figure is expected to jump, once the lungs are no longer the primary factor determining survival.

To be sure, the placenta has other jobs in addition to managing the exchange of oxygen and CO2. Among others, it removes toxins from the blood and regulates blood sugar levels–jobs that will later be taken over by the liver, kidneys and pancreas. And that’s where new obstacles arise if doctors are able to extend safe gestation rates into 20 weeks or less by solving the lung problem. Other organs won’t be ready to do their jobs.

But we have only been discussing artificial placenta version 1.0. Once that version is perfected, there will be refinements and improvements. Blood dialysis machines and other procedures that we already understand and employ routinely will be utilized in concert with artificial placenta 1.0, leading to versions 2.0, 3.0 and beyond.

And while scientists continue to look for ways to increase survival rates at early stages of gestation, other researchers are looking at it from the opposite direction: How long can we allow a fertilized egg to develop in a laboratory setting prior to uterine implantation? Recently, there was a major advance, published in the journal Nature, in which researchers showed that embryogenesis could proceed outside the womb under laboratory conditions for 13 days.

What’s unknown is how much longer it could have gone. That’s because the 13-day time period is not a technical limit. The team had to terminate the experiment because of an international agreement against research on human embryos aged 14 days gestation and older. In other words, there’s no biological reason why the gestation could not have continued to 15 days gestation, 20 days, or longer.

And as science pushes forward on both the premature birth front and the implantation front, there will be a point where the two paths merge. Eventually, it could be possible for the entire gestation to occur outside the natural womb. Whether that happens sooner, or later, the incremental advances are on a collision course with current paradigms surrounding biomedical policy debates, including abortion and human stem cell research.

With this in mind, I put the matter of ectogenesis policy to Zoltan Istvan, a transhumanist author who has been trying to give the transhumanist movement some kind of political organization. This might enable ectogenesis and other body-altering ideas to get onto the policy radar screen.

“The current political dialog is not dealing with this controversy yet, but they’re on a paradigm that will have to be adjusted,” said Istvan, who ran for president in the 2016 election, hoping to draw mainstream politicians to biotechnology issues.

David Warmflash is an astrobiologist, physician and science writer. Follow @CosmicEvolution to read what he is saying on Twitter