This article or excerpt is included in the GLP’s daily curated selection of ideologically diverse news, opinion and analysis of biotechnology innovation.
It was a dark and stormy night in 1818, when something sinister was loosed upon the world.

Okay, so it might not have been dark and stormy, but it was definitely 200 years ago that a most monstrous horror story first flared into life—Mary Shelley’s Frankenstein. It is also, therefore, two centuries since a particular meme was seared into the cultural consciousness: that ‘unnatural’ meddling in nature can only end in disaster. Given this, it is hardly surprising that Frankenstein and his hellish creation have been so eagerly seized upon by those most opposed to the modern revolution in genetic science.

Yet this goes beyond simple scaremongering (such as the snide ‘Frankenfood’ dismissal of genetically modified produce). The story of Frankenstein is where its power lies. We are a story-making species, and telling tales moves us emotionally in ways that hard cold reason rarely can. If modern genetic technology is ever to be more widely and enthusiastically embraced, therefore, its proponents must themselves learn to tell better stories.

Indeed, a good place to start is with the story-telling – both literal and metaphorical – of the opposition. For example, to appreciate how reason can so readily be swept aside by passion, take what was likely the first use of ‘Frankenfood’, in a letter to the New York Times in 1992: “If they want to sell us Frankenfood, perhaps it’s time to gather the villagers, light some torches and head to the castle.” This clearly is not a rational argument—after all, a sensible option here is simply not to buy the food you don’t want—but its emotional resonance has endured for decades, despite equally long years of fact-based counter-argument. 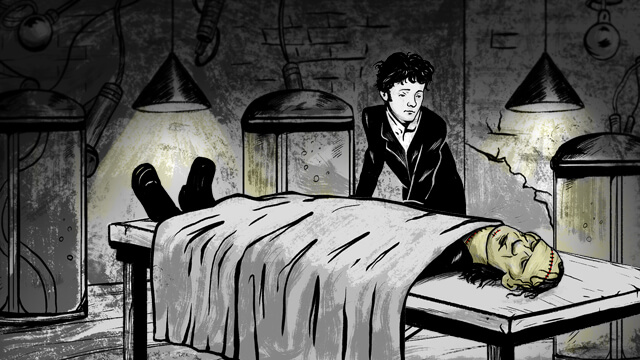 And here we may return to Frankenstein itself. Arguably, the first real science-fiction novel, where “fantastic events occur … purely through science”, Shelley’s Gothic masterpiece can provide a model of how we can tell better science stories (or, at least, avoid telling bad ones).

>Written at the dawn of the modern industrial age, the novel portrays the allure of science in terms still instantly recognisable today. Young Victor Frankenstein, enthralled and beguiled by the promise of science, dedicates himself to the quest of understanding the nature of life itself. “The world to me was a secret,” he proclaims, “[one] which I wished to discover.” This latter feeling is likely familiar to many (if not most) modern scientists: a desire to explore how and why the world is as it is, of unravelling its ‘secrets’ while still revelling in its complexity—a millennia-old fascination best captured in Plato’s vivid image of “carving nature at its joints”.

There is, though, another view of scientific ‘discovery’, one that would be just as familiar to those suspicious of the methodologies of modern science. This alternative is clearly expressed by fictional character Ian Malcolm, the skeptical mathematician in Michael Crichton’s best-selling Jurassic Park: “What’s so great about discovery?” Dr. Malcolm asks when it is used to justify the science behind the dinosaur-themed amusement park. “It’s a violent, penetrative act that scars what it explores. What you call discovery, I call the rape of the natural world.”

Jurassic Park is, of course, a classic contemporary example of the Frankenstein ‘don’t mess with nature’ motif, with its genetically engineered dinosaurs the terrifying modern equivalent of Frankenstein’s original monster. And the parallels go deeper—further evidence of how Shelley’s imaginative meme has provided an enduring template for later generations of story-tellers. In decrying “the lack of humility before nature that’s being displayed”, for instance, the naysaying Dr. Malcolm merely echoes Victor Frankenstein’s anguished remorse at science gone wrong—of having “set loose upon the earth a daemon whose delight is in death and wretchedness”.

Similarly, Dr. Malcolm’s disparaging charge against the scientists—of being “so preoccupied with whether or not they could that they didn’t stop to think if they should”—simply reflects the awful truth that Frankenstein himself learns too late. After working blindly “for the sole purpose of infusing life into an inanimate body,” Frankenstein’s blinders are ripped off at the very moment his creation first opens its eyes. “I had desired it with an ardour that far exceeded moderation; but now that I had finished, the beauty of the dream vanished, and breathless horror and disgust filled my heart.”

Again, this illustrates powerful tropes that persist in the anti-science mindset. The belief, for example, that scientists, like Frankenstein, are so immoderately obsessed with the process—manipulating genes, say—that they ignore possible horrific or disgusting outcomes—mutant species or unnatural foods. Or that scientists’ ardour and motivation is short-term and transient, and that they will simply walk away from disastrous or unforeseen results. (Those opposed to the genetic revival of lost species, for example, disparage the “obvious gee-whiz appeal” of “costly and flamboyant” de-extinction proposals.) And here, too, is the common thread that binds the anti-GMO movement together—that, as with Frankenstein’s original illicit experiments, modern science is illegitimately and unnaturally interfering with nature itself.

The natural/unnatural contrast is at the core of most of the opposition to genetic technology, with reasoned argument lost in the emotive appeal of the ‘real’, ‘pure’, ‘unprocessed’, ‘wholesome’ fruits of nature against the ‘fake’, ‘freakish’, ‘divergent’, ‘artificial’ products of human hands. Time, too, creates a comforting haze—thus, to people who have never seen the ancestral species from which modern cereals or cattle, say, are descended, today’s domesticated plants and animals will always seem more ‘natural’ than any novel genetically engineered alternatives. Yet the fact that familiar farm species are themselves genetically modified organisms, whose desirable traits have been artificially selected over time, is lost in the intuitive reasoning of the anti-GMO movement. Here, as elsewhere, the facts get in the way of the story.

Genetic engineering’s precision and speed, therefore, far from being taken as a positive, is rather a reason for its negative reception amongst the scientifically skeptical. Indeed, this feature of GE evokes a further fear with clear Frankenstein overtones—that, once such technology is given the green light, unnaturally created organisms will be rapidly and irreversibly ‘set loose upon the earth’ (with, of course, deadly and wretched consequences).

Of course, the Frankenstein story and its Jurassic Park-like descendants are compelling because things go so horribly wrong not despite them ending in disaster. The insatiable human appetite for gloomy news, unfortunately, is something that more optimistic storytellers consistently face—the devil, after all, always has the best tunes. But while we cannot but help being drawn to tales of tragedy and woe, unmitigated misery does not a good story make (perhaps explaining why we so quickly lose interest in long drawn out catastrophes). And it is here that more emotionally appealing stories on the side of science are possible.

Futurist Stewart Brand, for example, encapsulates a passion for science in defending the radical idea of de-extinction—of using genetic technology to bring back long lost species such as mammoths. Pointing to the self-defeating doom and gloom of much contemporary conservation storytelling, Brand suggests instead that genetics could shift the environmentalist message “from negative to positive, from constant whining and guilt-tripping to high fives and new excitement.”

“That something as irreversible and final as extinction might be reversed is a stunning realization. The imagination soars. Just the thought of mammoths and passenger pigeons alive again invokes the awe and wonder that drives all conservation at its deepest level.”

‘Stunning’ thoughts, ‘soaring imagination’, the awakening of ‘awe and wonder’—all this in defense of genetic technology?!!

Indeed, in respect of the Frankenstein meme, Brand’s emotive defence of de-extinction is particularly intriguing; after all, the very idea of giving life to what is dead is the horrific basis of Shelley’s entire story (and, even more explicitly, of its modern Jurassic Park incarnation).

Yet herein lies a danger. Any overly-enthusiastic defense of the likes of de-extinction risks being dismissed, in a typical Frankenstein-inspired manner, as merely a cursory craze for flash-in-the-pan genetic wizardry. Indeed, this is perhaps why Brand’s co-founded Revive & Restore organization now emphasises the ‘genetic rescue’ of threatened species and ecosystems, with de-extinction merely one means of “taking the long view” in “ensur[ing] a biodiverse future”. But accentuating the long-term, intergenerational nature of such projects is good story-telling, conveying tragedy (of species loss), challenge (of stemming the tide), and the dramatic but uncertain prospect of ultimate success. And this is how wider genetic stories could be told—of the life-affirming struggle against the scourge of disease, of combatting the food crisis, or of simply battling to make the world a better place.

The point of storytelling is to leave a desired impression in an audience’s mind. For two hundred years, Mary Shelley’s science-fiction has done this with horror. Perhaps now, though, science-fact could take a few pages from Shelley’s book to tell a more enchanting tale.