This article or excerpt is included in the GLP’s daily curated selection of ideologically diverse news, opinion and analysis of biotechnology innovation.
It’s been more than four years since I did work investigating the association between the frightening cases of polio-like acute flaccid myelitis (AFM) affecting children and a variety of different potential causative agents (viruses, bacteria, etc.). We still don’t know what’s going on, but we also haven’t definitively ruled out enterovirus D68. Other potential causal factors investigated have included coxsackievirus A16, enterovirus A71, and many others. We do know, for example, that enterovirus A71, poliovirus, and West Nile Virus can all be associated with acute flaccid myelitis.

What’s been so frustrating and elusive in the hunt is that, despite extensive and complex testing of cerebrospinal fluid of patients in some cases, there doesn’t appear to be one single recurring type of pathogen that could be considered the smoking gun. In fact, in some patients, there are no detectable pathogenic agents at all. It’s also sometimes difficult to accurately differentiate AFM cases from other neurologic diseases, such as Guillain-Barre syndrome and transverse myelitis.

One of the most promising, albeit subjective, hypotheses we’ve been testing has been the reported presence of an upper respiratory infection preceding acute flaccid myelitis symptoms. In fact, the Centers for Disease Control and Prevention (CDC) roughly characterize that ~90% of AFM symptom cases have followed a respiratory illness or fever.

The architecture of seasonality in infection

To help you build your understanding of what’s going on, as well as what we’re seeing in the data, check out this time-series plot of the incidence of AFM cases by month (though in all fairness, it should be represented as a line plot, not a bar chart): 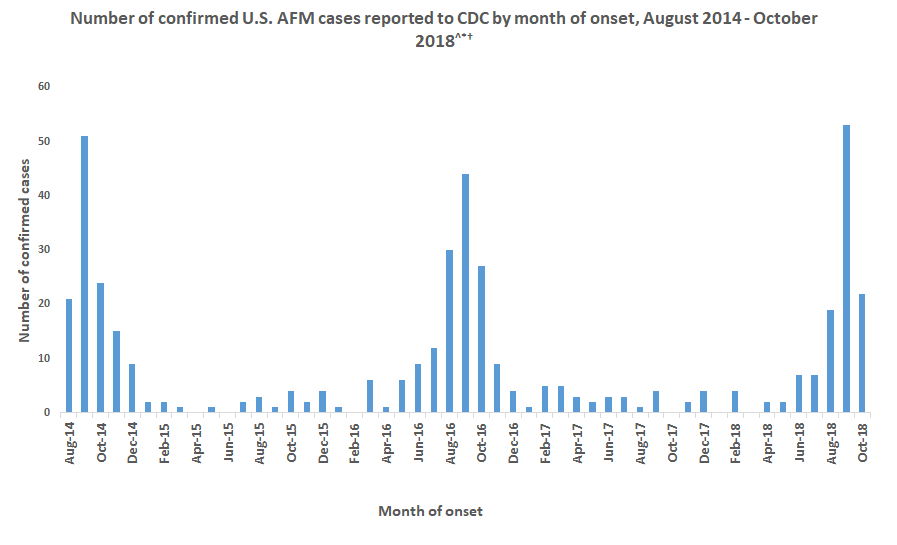 Before you prematurely jump onto the bandwagon of those who think they’ve ‘solved it’ based on what you’re seeing above, realize that there’s much more that goes on in interpreting these data properly. Factors include misdiagnoses, lack of reporting, super-reporting (out of fear, etc.), increased sensitivity of healthcare providers and ‘looking’ harder, etc.

As we continue to probe more deeply, we learn a lot more day by day. We only hope that the rapidity of our answers can help prevent future cases.

Following below is what I wrote back in 2014 following news reports and discussions of causality:

As cases continue to build in the Midwest of respiratory illness and other cold-like symptoms it’s important to realize that we are constantly facing immunologic threats every day.

Newsworthy ‘spikes’ in illness cases don’t necessarily mean we have limited knowledge of what is causing the illness or what the appropriate care should be. In fact, from the Missouri Department of Public Health & Senior Services, we have the following statement:

SUBJECT: Respiratory Illnesses Due to Enterovirus D68 (EV-D68) in Missouri

Current Situation: Recently, a pediatric hospital in Kansas City, Missouri has experienced over 300 cases of respiratory illnesses in their facility. Approximately 15 percent of those illnesses have resulted in children being placed in an intensive care unit. Testing of specimens from several cases at a specialized laboratory at the Centers for Disease Control and Prevention (CDC) indicated that 19 of the 22 specimens were positive for Enterovirus D68 (EV-D68). The St. Louis area is also experiencing a recent increase in pediatric respiratory illnesses. Many specimens from those cases have tested positive for enterovirus, and further testing for specific virus type is pending. To date, no deaths have been reported due to EV-68 in Missouri.

As there is genetic shift and/or drift in viral specimens, and as certain illnesses occur in transient patterns and clusters, it should be made clear that clinical appearance of this enterovirus subgroup HEV-68 is not new, and in fact has been noted that “HEV-68 may play a predominant role among the enteroviruses associated with [acute respiratory tract infection] in children.”

Related article:  This year's flu season may be just as bad as last year's—and we still don't have a universal vaccine

Additionally, The Centers for Disease Control and Prevention (CDC) observed three years ago, “Clinicians should be aware of HEV68 as one of many causes of viral respiratory disease and should report clusters of unexplained respiratory illness to the appropriate public health agency.” Worryingly of course, as seasonal cases of respiratory illnesses begin to increase, pithy diagnoses of HEV-68 will undoubtedly be made without the appropriate viral speciation and serotyping (there are a variety of immunological, biological, and molecular typing methods available). Appropriately done, it can be diagnosed by reverse transcription–polymerase chain reaction (RT-PCR) testing along with analyzing a certain few structural protein genes. This is the only way to accurately measure effect incidences and from there, impute epidemiologic vectors. Measured simply by clinical symptoms and not viral typing, it is very difficult to impossible to separate HEV-68 from human rhinovirus (HRV), with which HEV-68 shares epidemiologic characteristics.

Considering that the symptoms of this enterovirus are much like the common cold, mostly caused by

a rhinovirus, some hospitals and physicians are suggesting patients not visit for care if they have respiratory symptoms. “Symptoms include a high fever, trouble breathing, and a rattling couch [sic]. A hospital in Quincy, IL has seen 70 children with what appears to be this same virus. The children came in over the holiday weekend. Reuters notes that, for the time being, children under the age of 12 have been asked to stay away from Blessing Hospital in Quincy.”

It’s not likely in the near future to have a viable immunization for enterovirus, given that there are so many subgroups and serotypes, and similarly, there are an incredible array of human rhinovirus serotypes. Couple this with the fact that the replication fidelity of enterovirus is so poor (meaning that the genetic combination is quite error-prone, leading toward more mutations), and they become a moving target. The CDC continues to investigate the pathogen and the spread of it, but much of the treatment will be symptomatic—supportive care during the illness.

So far the obvious and visible vector are the many children admitted for hospital care in the Midwest; activities such as disinfecting frequently-touched surfaces are relatively ineffective, given that one-touch later, they are re-contaminated. Hand washing and avoiding touching one’s face can limit the spread of the illness, but at the same time, hand washing vigilance and ‘touch-discipline’ are unpredictable in younger children.