Pesticides and Food: It’s not a black or white issue, Part 2: Have pesticides improved?

In Part 1 of this series, I showed that pesticide use has decreased dramatically per unit produced, even as it has only slightly decreased in use per acre. This is because the amount of food that each acre produces (its yield) has steadily increased since 1985.

Although pesticide toxicity continues to be a concern for many consumers, commonly-used pesticides have decreased in toxicity and improved in biodegradability over the years. However, debates concerning the safety of pesticides typically focus on whether or not to use pesticides at all, presenting organic and conventional as the two opposing sides, even though both farming techniques use pesticides. They typically do not include nuanced comparisons of how pesticides have changed over time and how organic and conventional pesticides compare on common measures of toxicity and biodegradability. This post compares many of the most commonly-used pesticides to show where improvements have been made and where future improvements are still needed.

How have pesticides improved over the last 40 years?

The USDA has also calculated how pesticide quality has improved since the 1960’s by evaluating toxicity (inverse of the water quality threshold), potency (measured as the inverse of the application rate per crop year), and persistence (half-life) of many common pesticides*.  Their calculations show that pesticides have become less toxic, more potent (leading to lower application rates), and less persistent in the environment.

The following graph includes the five most commonly-used synthetic pesticides from 2016 as compared to the most common organic pesticides in 2016 as well as the most common synthetic pesticides from 1976. One way to measure the toxicity of chemicals is to measure the chronic no-observed effect level (NOEL). This value is the highest dosage level at which chronic exposure to the substance shows no adverse effects. This means that a high chronic NOEL represents a low-toxicity substance – the higher the number, the lower the toxicity. For the purpose of this graph, I subtracted the chronic NOEL from 1000 so that a high value would represent a high-toxicity substance.

Chronic NOEL values for the most-used organic pesticides are not available because they are considered very low toxicity and generally considered safe based on their normal existence in the environment. The chronic toxicity of synthetic pesticides have improved since 1976, especially with the increased use of glyphosate, which is one of the least toxic pesticides used. 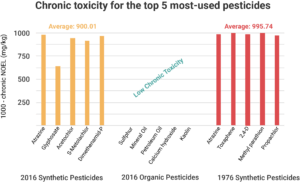 The biodegradability of pesticides is also an important factor when attempting to assess possible negative effects of pesticide use. One way to measure this is to calculate the soil half-life: the time it takes for a pesticide to reduce by half in soil. When pesticides have a short half-life, this means they are quickly degraded and do not persist in the environment very long. This typically means they have less of a negative impact on the environment. *A soil half-life is not available for calcium hydroxide because it is used as a soil conditioner and therefore is viewed as a benefit to the soil when applied. 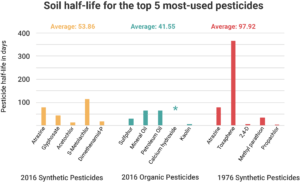 Another way to represent the environmental safety of a pesticide is the Environmental Impact Quotient (EIQ), which takes into account the soil half-life as well as the toxicity to different types of animals including birds, bees, and fish. Although some have criticized the EIQ and suggest other methods for estimating environmental risk of pesticides, the EIQ provides a single value to compare the environmental impact of various pesticides. It is helpful in this case to get a general sense of the influence of pesticides on the environment over the last few decades. Learn more about the Environmental Impact Quotient at the Cornell College of Agriculture and Life Sciences website. *EIQ values for toxaphene and propachlor are not available because toxaphene was banned in the U.S. in 1991 (before the EIQ was developed) and Monsanto discontinued manufacturing propachlor in 1998. An EIQ value for calcium hydroxide is also not available because some of the values needed to calculate the EIQ are not available, including chronic toxicity, as mentioned earlier.

The environmental impact has decreased as newer pesticides are used that have lower toxicity and lower use rates. 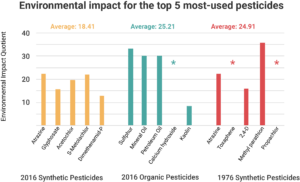 Many arguments surrounding pesticide use do not take into account the changes and improvements in pesticide toxicity over time or include a risk comparison to give context to possible risks. For example, if one pesticide is banned, what will take its place? Will a more toxic pesticide be used instead? When making decisions about the use of pesticides, it is always necessary to compare the various risks. How can we increase crop yields to meet a growing population while minimizing risk from pesticide toxicity and environmental impact? Consumers regularly purchase products that carry what are considered moderate risks, including caffeine and vanillin. Therefore, it is important to give context to the possible risks of pesticides and balance risks with the benefits that pesticides provide. Even though pesticide safety has improved dramatically over the last 40 years, there are still concerns surrounding specific pesticides, especially glyphosate. See the next post (Part 3) in this series to learn about this contentious chemical.