Pesticides and Food: It’s not a black or white issue, Part 4: How do organic pesticides compare to synthetic pesticides?

Many consumers choose to buy higher-priced organic produce because they believe organic foods are not grown using pesticides and therefore are healthier for humans and for the environment. However, organic farming can include any pesticides derived from natural sources. This distinction does not mean organic pesticides are necessarily less toxic than synthetic pesticides. The reality is more complicated. 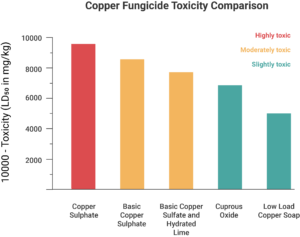 The graph above shows the median lethal dose (LD50), one way to measure acute toxicity of chemicals. This value is the dose required to kill half the members of a tested animal population after a specified test duration. This means that a highLD50 represents a low-toxicity substance – the higher the number, the lower the toxicity. For the purpose of this graph, I subtracted theLD50 from 1000 so that a high value would represent a high-toxicity substance.

For example, here is a comparison between two insecticides, one organic (Bt) and one synthetic (diazinon):

In the case of Bt and diazinon, the organic pesticide is less toxic and is less likely to negatively harm the environment. However it’s not always the case that the organic option is the most environmentally-friendly.  Here is a comparison between two organic fungicides and two synthetic fungicides:

It is clear that toxicity and environmental impact varies quite a bit within both organic and synthetic pesticides.