Pesticides and Food: It’s not a black or white issue, Part 6: Pesticide residues ― Something to worry about?

In this series, we have highlighted the complexities surrounding pesticide use, and the importance of balance instead of extremes and generalizations. A final worry that many consumers have is that pesticide residues on their produce are dangerous to their health. Scare tactics from advocacy groups and misleading information from the media commonly give the impression that organic produce is safer and healthier than conventional produce.

Pesticide residues―Something to worry about?

Conventional and organic produce has such low amounts of pesticides on it that you could eat your weight in fruit every day and still not be in danger of any health problems from the pesticides (You definitely would have health problems from eating that much fruit though!). The following graphic shows the number of servings of pears, bell peppers, and apples a child could eat every day without negative health effects from pesticide residues, even if the produce has the highest level of pesticide ever recorded by the USDA. 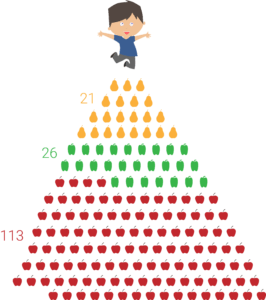 The safety of pesticides and the amounts that end up in our food are constantly being evaluated. And, just like anything that goes into your body, it’s the dose (the amount) that matters. Fruits and vegetables naturally contain “toxic” chemicals like aluminum, nicotine, and capsaicin. But the amount is so low that it’s not something we need to worry about. Similarly, pesticide residues on produce are too low to cause health problems, and are similar between organic and conventional produce.

In this series, I highlighted a few major concerns and issues surrounding pesticide use in the U.S. with the purpose of showing that many arguments made in the media are oversimplified compared to the real challenge of producing food in the most healthy and efficient way possible. It is easy to call organic good and conventional bad, but that is not accurate and not the best way to improve farming practices going forward. Many changes and improvements in pesticides and farming practices have been made over the last few decades, but to continue improving, we need to evaluate each pesticide, technology and farming practice individually and constantly compare them with alternatives. This is the only way to accurately and scientifically meet the challenges we face in the future, including an increasing population and climate change.