Crops and foods today are not what they used to look like.

Farmers and plant breeders have been modifying plant genes since the earliest human communities were formed and farming took hold in order to develop crops that better resist pests and foods with improved nutrition and taste.

Biotechnology proponents, particularly agro-biotechnology corporations, like to claim that humans have been genetically-modifying crops for thousands of years. Biotech advocates say that modern genetic techniques, including GMOs and CRISPR gene editing, are just a continuation of this time-tested process.  That’s true, sort of.  Modern corn, bananas, eggplant, Brussels sprouts, and frankly almost every food we eat have been altered in some way by humans. Advances in technology, they say, have made genetic modification more precise, safer and healthier than ever before, so we should embrace them with streamlined regulatory oversight.

By and large, the public has been queasy about endorsing that view, no matter that it is overwhelmingly held in the mainstream science community. Many consumers, often stoked by anti-biotech advocates and marketing campaigns from organic producers, worry that the innovations introduced since the approval of the first GMO crops in the United States in 1996 might be something uniquely different and might introduce unintended and dangerous side effects, could be bad for human health or may be problematic for the environment.

Traditional breeding of crops existed since the beginning of human farming communities. Consider corn, which supplies about 21 percent of human nutrition across the globe. Scientists now believe it is the descendant of an ancient wild grass with relatives in Mexico today known as teosinte. It had kernels, but instead of the luscious ones you are familiar with today, it had inedible, black ones that could crack your teeth. That was before humans intervened to bend nature.

Beginning about 10,000-7,000 years ago, our ancestors set up field laboratories—yes, that ugly word often used by biotech critics to diss recently-bred crops—to randomly experiment on this odd grass with hard buds. Through trial and error, cobs became larger and slightly more edible over the centuries, and with more rows of kernels, eventually taking on the form of modern maize. Modern sweet corn yields 100 times more than teosinte, a testament to genetic modification.

Today, crop breeding encompasses a whole range of techniques.The Genetic Literacy Project thought it might be instructive to make available an infographic that illustrates the various methods of crop genetic modification, including how many genes are affected and what types of regulation exists for each technology. We thought it important to specifically and accurately define genetic modification techniques, so that consumers are not overly fearful or overly optimistic about the risks and benefits.

We illustrate that traditional breeding, which most consumers are not worried about, is actually the least precise but also the least regulated. Newer biotechnologies are more precise, yet counterintuitively, from a science perspective, are more regulated. Should consumers be more concerned about one type of modification versus another? The evidence suggests ‘no.’ Although many consumers focus most on the process used to create new crops and food, scientists and regulatory agencies in the US and Canada typically focus on products and their safety. This is because various processes can be used to create products with the same level of health and safety. For example, mutagenesis and gene editing (two different processes) could both be used to create herbicide-resistant wheat (the same product). 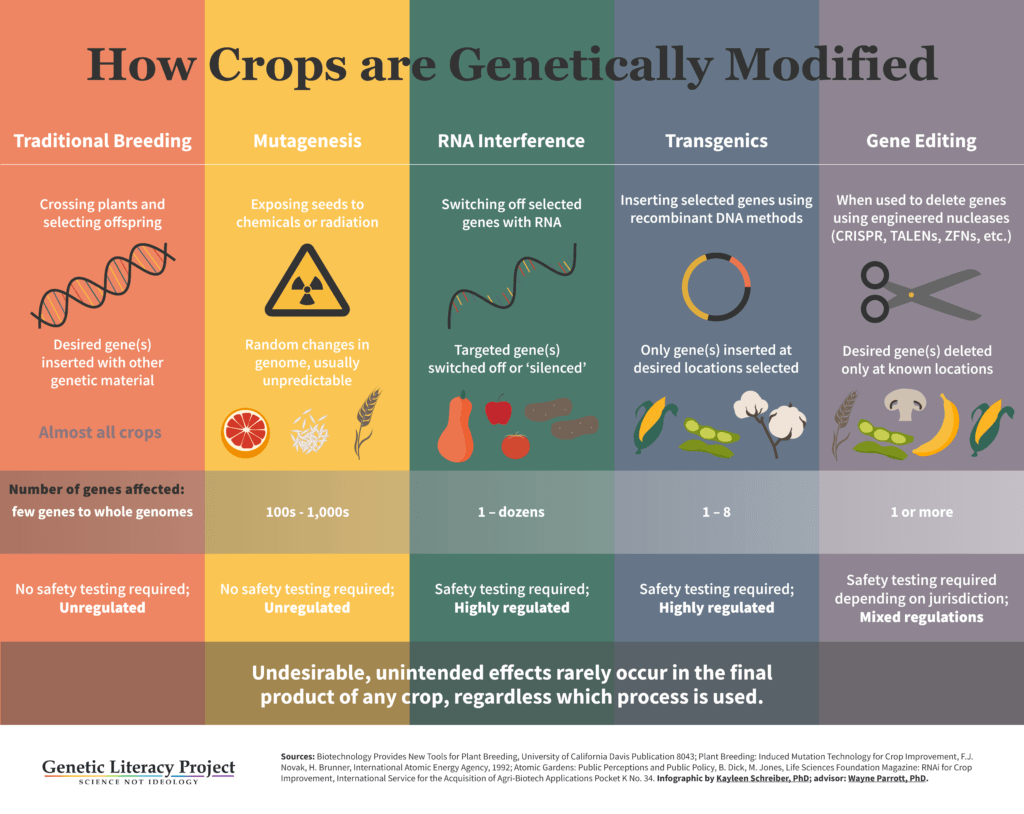 Click on the image above to view the full-size PDF in a new tab.

Lots of genes are swapped at once in traditional breeding, a process that scientists consider “messy.” Some traditional breeding techniques are high-tech, such as marker-assisted breeding. While breeders have been able to cross plants with their wild relatives (called a wide cross) to produce hybrids, the possibilities of using genes from distantly-related or other species are limited.

Another complexity is that gene editing via CRISPR or other techniques is fairly new. Every gene edited plant currently in the regulatory pipeline has been created by only deleting specific genes. This means that currently, gene edited plants do not have any so-called foreign or modified DNA in them. For example, a high-fiber wheat is being developed that would contain three times the amount of fiber in standard white flour, and contains no DNA from other species. However, it is also possible to modify or insert foreign genes using gene editing. Modification and insertion of genes will likely be regulated differently than deletions.

There is evidence that because gene editing mimics widely accepted and time-tested techniques such as mutagenesis, it will face minimal regulations. That’s so far true in North America and in about a dozen other countries around the world, but not in Europe. The EU regulates GMOs and gene editing the same, under legislation that dates to the early 2000s that most scientists consider outdated.

It is important to remember that the evidence suggests that none of these techniques pose any danger to humans, farmers or consumers. Unintended effects as a result of genetic modification—whether the conventional kind or more recent biotech versions such as GMOs or gene editing—are extremely rare, mostly because of the extensive amount of back-crossing that occurs in all types of genetic modification processes, traditional or biotech.

Backcrossing is when a genetically modified crop is crossed with the unmodified crop over multiple generations. The goal of backcrossing is to obtain a line as identical as possible to the unmodified original crop, with only the addition of the gene of interest. After 6 crosses, the resulting plant is 99.22% genetically identical to the unmodified crop. Therefore, although it is important to understand the differences between genetic modification processes, the risk of unintended consequences of genetic modification of crops and food that make it to market remains extremely low.