John Agaba | Cornell Alliance for Science | March 15, 2019
This article or excerpt is included in the GLP’s daily curated selection of ideologically diverse news, opinion and analysis of biotechnology innovation.

It’s an old proverb in these lands that since man has learned to shoot without missing, birds have learned to fly without perching — and the same is true with farmers in Sub-Saharan Africa (SSA).

As climate change becomes more of a reality, bringing uneven seasons, longer droughts and heavy rains that are often accompanied by strong winds, floods and disease, farmers in SSA are starting to plant more resilient varieties.  Those who do plant varieties that are drought-tolerant, disease-resistant, fast-maturing and with stronger stems — traits that counter the climate’s tricks — reap big.

Dr. Emmanuel Zziwa, national climate change and adaptation officer at the United Nations Food and Agriculture Organization, said more farmers in the region are changing crop choices to get around climate change and its effects. From Kenya to Nigeria and from Sudan to South Africa, farmers are transitioning. And as a result, they are harvesting “more food” and starting to look at agriculture as more than subsistence.

“They are, in fact, looking at going commercial, at agro-processing, and at how they can add value to their produce to make more money,” Zziwa said.  “Exports (of food) are going up and the quality of life is improving.”

But as the farmers transition, there is a feeling the region could maximize the opportunity by aggressively fast-tracking the more precise breeding methods available through agricultural biotechnology — also known as genetic modification (GM) — to develop climate-resilient varieties. 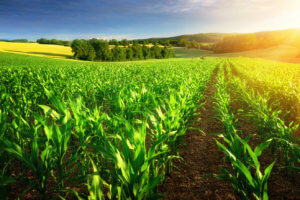 Most of the improved seeds farmers in these lands are currently accessing, including maize that is water-efficient and cassava that is high-yielding, are hybrids that are conventionally bred — a process that may require decades of research to develop a desired variety.

GM technology, on the other hand, allows breeders to identify and select the specific trait they are interested in, then introduce that gene into an organism to breed a new variety relatively quickly.

“You are looking at shortening the time it would ordinarily take you to create a desired variety,” said Erostus Nsubuga, chief executive officer and chairperson of the private Agro-genetic Technologies (AGT), which specializes in tissue culture and moves research work from lab to farmers by multiplying seeds.

But that is not the only advantage. GM technology is more precise and allows breeders to develop bespoke varieties, which are likely to achieve desired results.

Nsubuga said the technology is better-suited to deal with climate issues.

For instance, researchers in the region are trialing a rice variety in Uganda, Ghana and Nigeria that is nitrogen- and water use-efficient and at the same time salt-tolerant. The NEWEST rice program is a partnership by the African Agricultural Technology Foundation (AATF) and the International Centre for Tropical Agriculture and the Public Intellectual Property Resource for Agriculture. It is funded by the United States Agency for International Development (USAID).

Scientists in several African countries also have expanded the drought-tolerant Water Efficient Maize for Africa (WEMA) project to field test a variety known as TELA, which is also able to resist insects, including the devasting fall armyworm.

All these varieties can offer “near maximum” solutions against the pests, diseases and drought that African farmers increasingly experience, Nsubuga said. However, sociopolitical constraints prevent them from accessing the improved seeds.

“We are not moving partly because our populations have been fed on mixed messages (for and against biotech) and because our leaders are not making the brave decisions to create enabling environments for research and biotech,” he said.

But in countries where the environments are friendlier and the states have enabling legislation to guide use of GMOs, the technology is working wonders.

Dr. Hennie Groenewald, executive manager at Biosafety South Africa, which is a national biosafety service platform within the nation’s technology innovation agency, said early this year that farmers in the country were able to “more than double” farm produce using the technology.

South Africa and Sudan are the only countries on the continent that have officially commercialized biotech. Though Nigeria recently announced it has approved pest-resistant GM cotton and cowpea, farmers there have not yet begun growing those crops. An August 2018 report by the International Service for the Acquisition of Agri-biotech Applications (ISAAA) indicated South Africa had a combined planting of biotech maize, soybean and cotton totaling 2.73 million hectares in 2017.

Related article:  Podcast: The 'what, how and why' of GMOs, a crash course on genetic engineering

The technology has facilitated even the smallholder farmer’s dream of planting for export — not just for home consumption — and has empowered a number of them to embrace mechanized farming, leading to a doubling of the nation’s agricultural exports over the years.

He said Biosafety South Africa championed spread of the messages about the benefits of GM crops, and farmers are more enthusiastic about the improved seeds than ever before.

“Extension agents are creating awareness. Farmers now know they need these seeds which are resilient, and they know where to find them,” Groenewald said. “We don’t have an option but to go biotech and transition.”

Beans, bananas and maize were most at risk of the nine staples, including millet, sorghum and yam, that provide half of the agricultural production for SSA.

The report said “transformational change” is needed to guarantee food security. That means switching to more resilient alternatives, improving irrigation or abandoning agriculture altogether in the worst-affected areas, which is not feasible.

Julian Ramirez-Villegas, lead author of the study at CGIAR’s Research Program on Climate Change, Agriculture and Food Security said: “This study tells where, and crucially when, interventions need to be made to stop climate change destroying vital food supplies in Africa. We know what needs to be done, and for the first time, we now have deadlines for taking action.”

For instance, the research projected that regions in West Africa, including Ghana and Benin, will become unsuitable for growing bananas by 2025. It was the same for maize in Namibia, Botswana, Zimbabwe and Tanzania.

So, it is a no brainer that the region needs resilient varieties.

“Things have changed,” said Isiah Katungwensi, a farmer in western Uganda’s Kibaale district. “The soils are less fertile. There is drought. There is more disease. The only way to get around the challenges is to plant improved varieties that can at least withstand the harsh conditions.”

Katungwensi grows NASE 14, a higher-yielding cassava hybrid that is particularly drought-tolerant. The variety was developed by the National Crops Resources Research Institute at Namulonge in Uganda. He is also growing the improved WE2115 maize variety, which is water-efficient and was developed under the WEMA project, a public-private partnership dedicated to delivering drought-tolerant and insect-resistant seeds to smallholder farmers in SSA. Both of these hybrids are conventionally-bred.

Katungwensi realized he needed to shift from the indigenous varieties his family had planted since he was a little boy and adopt the improved hybrids if he was to harvest enough to feed his household amid the changing climate. But farmers would do better with superior seeds developed through GM technology.

“I have heard of them (GMOs). And I would want to plant them if they guarantee better harvests like people say,” Katungwensi said.

Unfortunately for him and many other farmers in this East African country, he cannot access the GM seeds because Uganda doesn’t have a legal framework to guide usage of the crops. Uganda’s Parliament passed a restrictive biosafety bill last November, which President Yoweri Museveni hasn’t signed.

Barbara Zawedde Mugwanya, coordinator of the Uganda Biosciences Information Centre, said unfavorable environments, including lack of legal frameworks to guide usage of biotechnology, has stopped some farmers from transitioning. 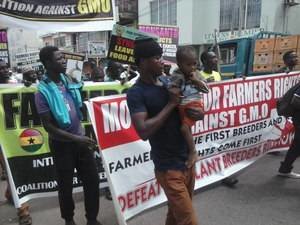 “Then there is propaganda. Too many people, some of whom don’t even understand science, speaking against the technology. All these are blocking transition,” Mugwanya said. “Some people are still attached to their indigenous varieties,” noted Okasai Opolot, a former commissioner for crop resources at the Ugandan Ministry of Agriculture, Animal Industry, and Fisheries who is now an agricultural consultant.  “They don’t want to let go. But our concern should be finding faster ways to feed an increasingly expanding population amidst climate change.”

Opolot added: “We cannot do this by looking at increasing hectarage of cultivable land (as land is constant). So we have to think of science.”

He called on governments to champion transitions by investing more resources into research to produce more of the superior varieties and subsidize the cost of the seeds so they are accessible to farmers. “There is no way around it. Climate change is real. We have to plant crops that are resilient,” Opolot said.